Blowfly swears to tell the truth

His brain is stuck on the profane

Miami is known for sun, sand and the uncanny ability to produce smut kings, but if you think it started with 2 Live Crew's Luther Campbell, you'd be mistaken. Blowfly, the original dirty OG, started in 1965 with "Rap Dirty," and is still touring and defending his title as the nastiest nother mucker on the planet. Five seconds into our conversation, he is already informing me that I'm "crumb-crushing, lip-licking, leg-splitting, spit-dripping..."

For a solid two minutes, I listen and journey through the six stages of Blowfly — surprise, offense, eye-roll, chuckle, full-out spit-take and finally acceptance as I try to guess his next insult before he says it. By the time he ends with "little brat," we're giggling and I am way more impressed than pissed off. Then he pauses and adds, sweetly, "No, you're not!"

Hip-hop's roots have been linked to everything from call-and-response gospel to reggae chat. So, why not add a potty-mouthed septuagenarian in a bedazzled cape and luchador mask to the list? The gross-out king of '70s party records has laid claim to pioneer status, and brings his machine-gun improvisational flow and kill-your-idols attitude to Tremont Music Hall on July 13. 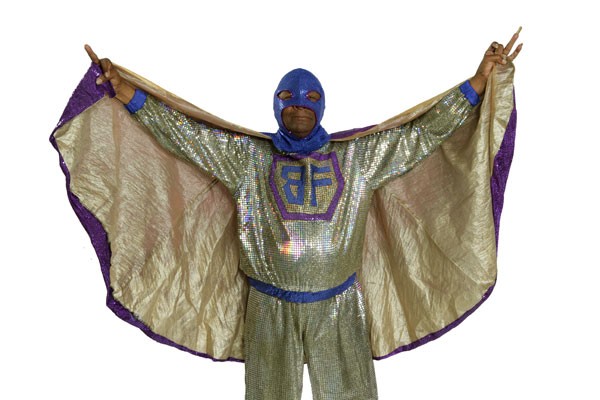 There's another side to Blowfly, though. Respectable R&B vet Clarence Reid has been called the father of the Miami Soul sound. As a songwriter and producer for disco label TK, Reid created hits for Sam & Dave, Betty Wright, KC & the Sunshine Band and other Southern soul heavyweights in the '60s and '70s. He was also a charting act in his own right. But Reid had an inner weirdo that funk-fraught R&B couldn't satisfy.

He began performing lewd, crass and crude pop parodies at parties for music industry friends. The songs were nothing like those of his day job. No love, peace or soul here. These lyrics were about as clever as a third-grader with Tourette's and a copy of Hustler, but that was part of the charm.

Dean Martin's "Everybody Loves Somebody" became "Everybody Fucks Somebody," James Brown's "The Big Payback" became "The Big Gay Crack" and "Soul Man" is now "Hole Man." You get the idea.

The songs got so popular people demanded copies, and Blowfly was born. Wearing a spangled face mask to conceal his identity and releasing the albums under his own Weird World label — because no respectable record company would touch the stuff — Blowfly became an underground anti-hero.

Ice T grew up listening to his father's party records and calls Blowfly "a master," while Chuck D says his foul style is "futuristic." Blowfly has been sampled by Ice Cube, Scarface, Slim Thug, Jurassic Five and Wu Tang Clan. He's opened for Fishbone, shared a label with Charlotte's Antiseen and had his mask stolen in Vancouver and New Orleans.

He relates a story about partying with the Rat Pack in the penthouse suite of a Miami Beach hotel, sometime in the early 1970s. "Coochie makes the sun rise," Blowfly sings in an astonishingly clear and beautiful alto, then breaks off into a laugh. "Sammy always had a lil' attitude, but Frank would be dying. Sammy said, 'I don't like dirty stuff.' But his song was called 'The Candyman!' I told him, Sammy, the original word for dingaling is your rod, stick, a candy stick. Who you fooling?"

However, Blowfly is more than just the dirtiest old man in the world. Behind the ass and pussy jokes is a surprisingly untainted ideal of human parity. To Blowfly, we are all just fucking around in the mud — blatantly, nakedly, achingly equal.

"As Clarence Reid, a lot of people would say [I] play too much, you can't say this. If your brother dates six girls he's a lover, a Casanova. But a girl dates two guys and [she's] a whore. It never made sense to me. So I did a song for Betty Wright, 'Girls Can Do What Guys Do,'" which Beyonce sampled for 'Upgrade U.'"

In fact, there's no subject he considers holy ground. Celebrity pedophilia cases yield a wealth of material and righteous indignation, culminating in songs like "R. Kelly in Cambodia," a twisted take on Dead Kennedys' "Holiday in Cambodia." "Ask Aaliyah," he says, referring to the deceased starlet's marriage at age 15 to Kelly. "Just goes to show, having talent and a high IQ don't mean nothing."

From Dean Martin to Diana Ross, Michelle Obama to the pope, no icon is safe from Blowfly. His live shows combine music, comedy and a savant-level command of rapid-fire insults.

He's working on his 39th album, Black in the Sack, slated for the fall, before an international tour. He promises (threatens?) to feature new material, including a Michael Jackson medley, a Christmas song and "Nigaro" — think "Figaro" — by his new alter ego Coño Pendejo Gonzalez. A documentary, The Weird World of Blowfly, came out in 2010, but his brand of crazy is best sampled live — if you have the stomach.