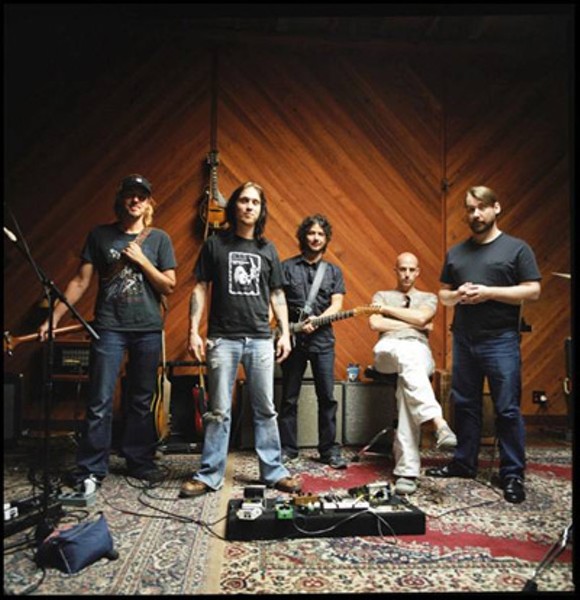 Many bands never recover from the loss of a band member. Blind Melon expected the same thing after singer Shannon Hoon died of a drug overdose. Now, 12 years later, the band has reunited, gotten a new singer and recorded a new album to be released early next year.

So, what changed? I recently asked that question and more to guitarist Rogers Stevens during a phone call from his New York home:

Hello, this is Jeff Hahne.

Hey! How are you?

Where are you calling from?

Are you at home now?

"Yeah, yeah. Home for a couple of weeks here or so."

Alright, well, I guess the obvious question is -- how did this all come about? The reunion ...

"It, uh, oh ... Well, I mean, we weren't trying to do this. We had no intention of ever reforming. We had all gone on to different things in our lives. We really had been on quite divergent paths, really. And, uh, Brad and Christopher have a studio in Los Angeles and they have been producing acts out there and an A&R person from one of the labels brought Travis by one day. Brad and Christopher were working on his demos, or helping him record some songs to get a deal, or whatever. Travis was a big Blind Melon fan, oddly enough and was way influenced by Shannon. And, uh, so they started working and I think the lights just kinda went off and that's where things sort of float up next from that point."

Was there anything that made you think it was the right time, or did it just feel right?

"Well, yeah, I mean, it did. It was totally based on a feeling because we had tried to sort of work together and to possibly find somebody before and our initial intention way back was to ... We were going to change the name and sort of move on as a different band. But we never found anybody because once you go down that path so far with one person, to find somebody else to play catch-up to you is very difficult because you kind of develop that communication thing that happens ... that unspoken kind of thing in a band. But, with Travis, it just kind of fell right in. There's a lot of similarities in his personality and his energy to Shannon and his voice is in that range where it allows him to sing Shannon's songs well. And, uh, which is really difficult for a lot of singers I think because his voice is so up there."

Did you guys have any hesitation to calling it Blind Melon?

"Oh, yeah. I mean we talked about it a lot. Basically we ... we knocked it around for a few months because there were things about it that felt obviously strange ... and there were things about it that felt right. Ultimately, we had to go by what felt right for us. I mean, I know a lot of people are gonna think it's a bad idea and it sounds like a bad idea. I mean, if somebody told me this, and I weren't in the band, I would think, 'That's a terrible idea.' (laughs) But, uh, for whatever reason, it works for us. We felt like if we were gonna go out and play the set with half of the old Blind Melon songs in there and half new songs, I mean, people were ... we'd be our own cover band and people ... every time that somebody wrote anything about us there would be parentheses beside or an asterisk that said 'Formerly the guys from Blind Melon.' So, it just kind of seemed stupid to try and do something else."

If it was all of you, the comparisons would be there anyway.

"Yeah, it was just gonna be a ... I mean, it sounds like Blind Melon, obviously with one major element missing. I mean, look, we know Shannon was the star of the band. I mean, we were all sort of incidental characters, I think, in the mind of most people. But, the way the band works, we all wrote songs and, uh, so ... I mean, we feel attached to a lot of these songs as well. We weren't just Shannon's backing band. Although, he was a phenomenal talent that would be, you know, tough to sort of ignore. I mean, we couldn't do it if we wanted to. Which we don't of course. I mean, our intention is to go out there and play his songs and sort of let people know because we think he was overlooked."

Yeah, I've always thought that too. People who only know "No Rain" they don't really know you guys at all."