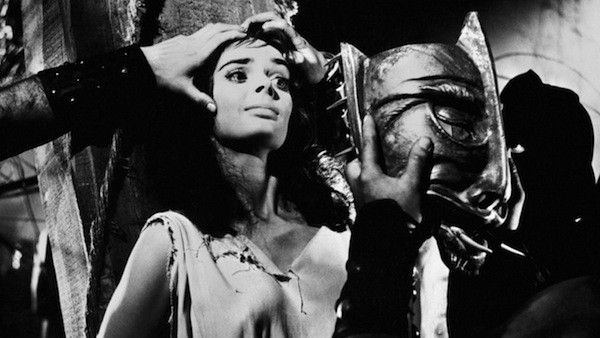 BLACK SUNDAY (1960) / HATCHET FOR THE HONEYMOON (1970) / LISA AND THE DEVIL (1974) / THE HOUSE OF EXORCISM (1974). One of the leading directors of Italian horror cinema (along with Dario Argento, Lucio Fulci and a couple more), Mario Bava began as a cinematographer before spending the two decades preceding his death (in 1980) helming such notorious efforts as Kill, Baby, Kill, Twitch of the Death Nerve and Baron Blood. Kino Lorber has now seen fit to release four of his features on Blu-ray — actually, three of his features, but we'll get to that in a minute.

Bava made his official directorial debut — he had worked uncredited on several earlier titles — with Black Sunday (aka The Mask of Satan), a beautifully composed picture whose moments of genuine shock surely rattled many a patron back in the day (indeed, the movie was banned in England for many years). Barbara Steele, in the role that turned her into a horror film icon, plays Asa, a 17th century witch who swears vengeance as she's burned at the stake. Cut to two centuries later, and a revived Asa schemes to gain immortality by drinking the blood of her descendant (also Steele). Bava and his crew's employment of unique camera angles, heavily atmospheric sets and startling moments of violence combine to create a trendsetting picture that has influenced generations of filmmakers (including Martin Scorsese and Tim Burton).

After the potent calling card of Black Sunday, Bava would go on to make other notable terror tales, but Hatchet for the Honeymoon unfortunately isn't one of them. There's nothing wrong with the look of the piece: As usual, Bava makes extraordinary use of color, sets and shadows. And for a while, the movie works, as it centers on a handsome man (Stephen Forsyth) whose Norman Bates-like obsession with his mother leads him to murder (his specialty: brides). But it's after the film culminates with a terrific set-piece involving a flight of stairs, an inquisitive detective (Jesus Puente) and a TV set airing Bava's 1963 gem Black Sabbath that it takes a disastrous turn into supernatural territory, becoming more obvious and less intriguing as it winds down. 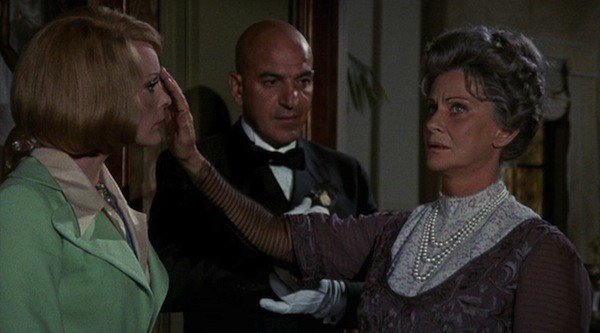 Similarly, Lisa and the Devil has its share of problems, but it's simply too audacious to be dismissed out of hand. Elke Sommer plays Lisa, a tourist whose trip to Spain takes a turn for the bizarre as she finds herself stranded in an eerie mansion alongside some other unsuspecting visitors. The matron of the estate (Alida Valli) and her simpering son (Alessio Orano) live there with a butler (Telly Savalas) with a penchant for sucking lollipops and making inappropriate wisecracks. Lisa suspects that he's actually Satan, but is he the one who's gorily dispatching the guests? Fans of Savalas' hit TV series Kojak will be amused seeing the actor down lollipops with the same vigor as on the television show (in real life, Savalas did so to cut down on smoking and thus incorporated it into both projects), but others will be split on the bravura plot spirals taken by Bava. 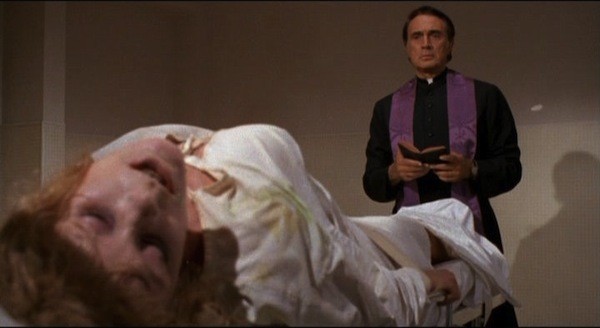 Despite a positive reception at the Cannes Film Festival, no U.S. distributor wanted to handle something as offbeat as Lisa and the Devil. Thus, this version was shelved — it didn't reappear until the 1980s — as producer Alfredo Leone, eyeing the massive grosses of 1973's The Exorcist, chopped out chunks of the film, filmed new sequences featuring Robert Alda as a priest, and released it as The House of Exorcism, with Lisa now a possessed woman with vivid memories involving that spooky mansion. This version, credited to director "Mickey Lion" (mainly Leone, with minimal input from a disgusted Bava), is mostly a travesty, though the shrewd Leone did end up with the distribution deal he sought.

Hatchet for the Honeymoon: **

CHICO & RITA (2011). Rather than filling the Best Animated Feature roster with critical underachievers like Cars 2 and Gnomeo & Juliet, members of the Academy of Harvey Weinstein Arts and Sciences went international this year, pitting France's A Cat in Paris and Spain's Chico & Rita against three American blockbusters. While it's admittedly nice to see smaller-scale releases snatch a prize away from the heavily hyped Hollywood fare — as when Japan's Spirited Away copped this award over stateside snoozers like Treasure Planet and Lilo & Stitch — the truth is that eventual winner Rango did deserve the Oscar over fellow nominees Kung Fu Panda 2, Puss in Boots and, yes, even Chico & Rita (I haven't seen Cat, which never played locally). The allure of Chico & Rita is easy to peg: The soundtrack is potent, the images don't look as if they've been spit out of a computer, and the story is so simple that even those averse to subtitles won't have any trouble following along. Moving back and forth in time and locale, the story proper begins in 1948 Cuba, as the promising young piano player Chico (voiced by Eman Xor Ona) first spots the beautiful singer Rita (Kimara Meneses) and woos her both personally and professionally. He's certain that they can become a great musical team and find success in New York and beyond, but fate, as well as Chico's character flaws (he likes the ladies and the booze), insures that their careers will take different paths. The animation is inventive and eye-popping everywhere except where it most matters: the design of the characters. While the backgrounds look superb, there's a lack of definition in human expressions; couple that with a screenplay so superficial that there's no tragic grandeur in the fact that these lovebirds are perpetually kept apart, and it's largely left to the excellent tunes on the soundtrack to provide any semblance of heartfelt emotion. Bebo Valdes (who also penned the film's score), Tito Puente, Dizzy Gillespie and Rocky Mount, NC, native Thelonious Monk are among those represented, and they're the ones most responsible for jazzing up this joint.

The Special Edition Blu-ray + DVD also includes a CD of the film's soundtrack and a 16-page booklet featuring an excerpt from the graphic novel. Disc extras include audio commentary by co-directors Fernando Trueba and Javier Mariscal; a making-of featurette; and the theatrical trailer. 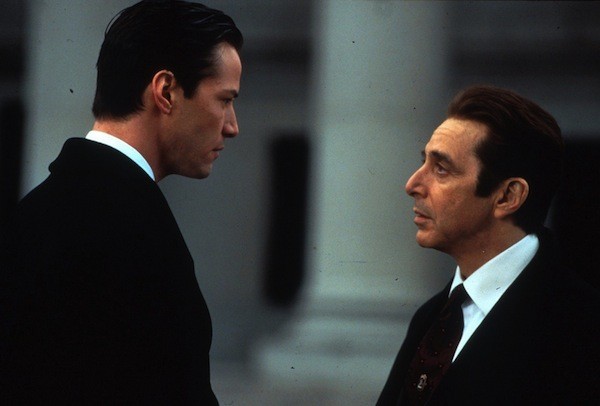 THE DEVIL'S ADVOCATE (1997). A supernatural thriller that basically plays like The Firm with the stakes raised reaaally high, The Devil's Advocate finds Keanu Reeves as Kevin Lomax, a vainglorious Florida attorney who has never lost a case. So when he's given an obscenely lucrative offer to move to New York to work for the powerful John Milton (Al Pacino), he and his loving wife Mary Ann (Charlize Theron) don't hesitate for a minute. But once the lifestyle of the rich and famous loses its allure, Mary Ann is walloped by loneliness (thanks to a workaholic husband), jealousy (thanks to her workaholic husband's wandering eye) and frightening visions (thanks to her workaholic husband's new acquaintances morphing into snarling demons). For his part, Kevin is oblivious to the method to his wife's madness; he's so keen on advancing his career that he begins compromising his ethics more frequently. Is he, in effect, selling his soul to his employer, who might literally be the devil in disguise? OK, subtle it ain't (beyond the obviousness of using the name Milton, the film also includes dialogue like Mary Ann barking at Kevin, "You can go to hell!"), but damn if this outrageously entertaining film doesn't maintain interest with its devious twists and turns. The most controversial ones are saved for the end: A climactic plot twist that will strike many as a cop-out is followed by an equally slippery coda that restores the movie's impish appeal. Blessed with a part that caters to his hammy inclinations, Pacino actually plays it close to the vest until the third act, while Reeves is unexpectedly forceful in one of his best performances. Yet the picture's most superlative turn comes from Theron, who's a revelation in the first role to really show off her talents. 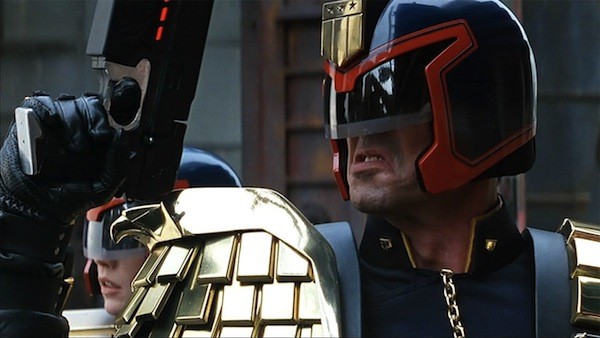 JUDGE DREDD (1995). A notorious box office flop during the summer of '95, this adaptation of a popular British comic strip has now been released on Blu-ray to coincide with the theatrical release of Dredd 3D, starring Karl Urban. Although not quite as, uh, Dredd-ful as I recalled, it still stands no chance of being mistaken for a good movie. Sylvester Stallone stars as the title figure, a 22nd century crime fighter who shows no emotion — and offers no leniency — as he carries out the letter of the law. But for reasons too convoluted to explain here, he's framed for murder, thus requiring him to spend the rest of the film's running time trying to nail the real villains (Armand Assante and Jurgen Prochnow). Slick production values and some talent in the supporting ranks (Max von Sydow, Diane Lane, James Remar and Scott Wilson, the last two uncredited) can't obscure the wooden direction by Danny Cannon and a clunky screenplay that, although written by capable vets with such hits as Die Hard and Terminator 2: Judgment Day to their names, reportedly was extensively reshaped by Stallone. The perpetually annoying Rob Schneider co-stars as Dredd's comic relief sidekick, which means that true comic relief is nowhere to be found.

Blu-ray extras consist of a making-of featurette and the theatrical trailer. 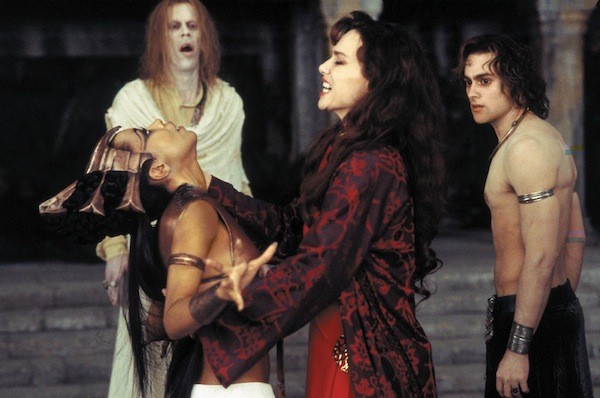 QUEEN OF THE DAMNED (2002). It's difficult to make a truly boring vampire picture, but the folks behind this draggy adaptation of Anne Rice's best-sellers The Vampire Lestat and The Queen of the Damned have done just that. Neil Jordan, Tom Cruise, Brad Pitt and the rest of those responsible for the arresting 1994 screen version of Rice's Interview with the Vampire are sorely missed this time around; instead, given the tedious exploits of the notorious bloodsucker Lestat (blandly played by Stuart Townsend) in this outing, the movie's sole claim to fame is as the final film project of recording star Aaliyah, who was tragically killed in an airplane crash before the picture's release. She's cast as Akasha, the Mother of All Vampires, but it's impossible to gauge her thespian abilities based on this performance: She only arrives during the final half-hour, buried under reams of makeup and jewelry and boasting an electronically altered voice that sounds like a cross between Bela Lugosi and Twiki the robot from that 70s Buck Rogers series. There's a compelling film to be made from these particular chapters in Rice's The Vampire Chronicles, but this moribund (and occasionally laughable) take ain't it. 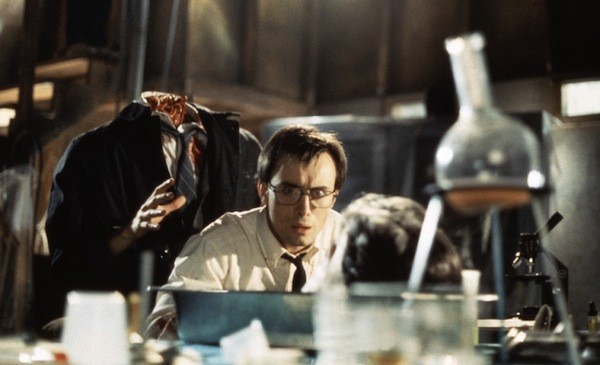 RE-ANIMATOR (1985). It's no match for The Evil Dead, but as far as tongue-in-bloody-cheek gorefests go, this update of the H.P. Lovecraft tale is a lot of fun, and it easily earns its cult status. I remember first seeing this not long after its original theatrical release, as part of an all-night Halloween triple feature at the long-defunct Town Cinema near UNC-Charlotte: After thrilling to George Romero's Dawn of the Dead and then slowly being put to sleep by some dull Italian horror yarn, the audience was awakened (re-animated?) circa 4 a.m. by the feverish opening sequence of this adrenaline-fueled exercise in splatter. Jeffrey Combs (very funny) plays Herbert West, a young medical student who discovers a way to revivify first a cat, then a cadaver, and finally deceased colleagues within his university's science department. Bruce Campbell stand-in Bruce Abbott plays Dan Cain, the nice-guy graduate student who becomes West's reluctant accomplice, Barbara Crampton co-stars as Cain's fiancée, and David Gale portrays the professor who plots to steal both West's discovery and Cain's girl. All of this leads to the movie's most notorious sequence, which lends a lurid new twist to the expression "giving head."