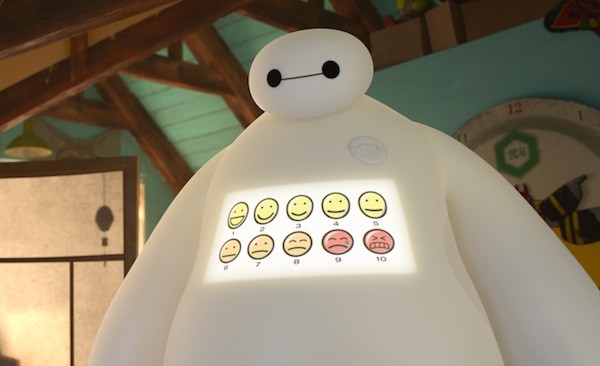 It's apt that the Christmas season is just around the corner, because only a Scrooge could fail to succumb to the charms of Baymax, the lovable, marshmallow-shaped robot found at — and in — the heart of the new Disney animated effort Big Hero 6.

An adaptation of a lesser-known Marvel Comics title, the picture, set in the East-meets-West landscape of San Fransokyo, centers on Hiro Hamada (voiced by Ryan Potter), an aimless 14-year-old genius who's given some much-needed guidance by his older brother Tadashi (Daniel Henney). Tadashi is a student at the San Fransokyo Institute of Technology, where he has developed a vinyl, inflatable robot named Baymax (Scott Adsit). Baymax has been programmed to serve as an efficient health care provider (doubtless to the chagrin of Republican politicians), and he and Hiro end up forming a special bond.

The first hour of Big Hero 6 is superb, complete with an array of interesting characters, an eye-popping visual design and, courtesy of the bulky Baymax, a sizable number of hearty laughs. As befits its comic-book origins, the second part turns more standard, as Hiro forms a superhero outfit with other science-nerd misfits. This part plays like a junior-league Avengers, with the likes of Iron Man, Captain America and Thor replaced with kids sporting monikers like Honey Lemon, Wasabi and Fred. It's a shame that the relationship between Hiro and Baymax takes a backseat to various action set-pieces — and let's not even discuss the head-smackingly obvious identity of the master villain — but even in this latter portion, the film is overflowing with visual invention and genuine sentiments.

Be sure to arrive at the theater on time so as not to miss Feast, the delightful short that precedes the main attraction. And be sure to stay through Big Hero 6's closing credits: As is the norm with any superhero film worth its salt, this one includes a post-credits sequence (eagle-eye viewers will catch a tease midway through the film), and it's one guaranteed to delight discerning grown-ups — even if the wee ones don't quite understand the fuss being made by Mom and Dad.