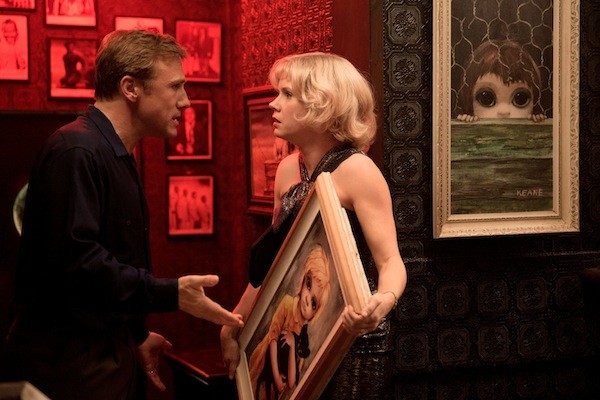 Scott Alexander and Larry Karaszewski are the gents who wrote the script for director Tim Burton's excellent 1994 feature Ed Wood — not to mention Milos Forman's 1996 controversy The People vs. Larry Flynt and his underrated 1999 effort Man on the Moon — so they may not exactly be the good-to guys when it comes to stories that remain committed to historical accuracy. After all, Ed Wood included not only a scene in which Hollywood great Orson Welles had a friendly chat with Hollywood hack Wood, it also contained a sequence in which Wood and his entourage attended a standing-room-only premiere screening for Plan 9 from Outer Space. The truth will out? Not with these guys at the keyboard!

But what they lack in fidelity to the facts, they make up for in providing pure entertainment, and they score again with Big Eyes, a picture that reteams them with Burton. This one does hew closer to reality, relating the bizarre and fascinating story of Margaret Keane (Amy Adams), a single mom who drew paintings of children with exceptionally large eyes, and her second husband Walter (Christophe Waltz), a smooth-talking con man who took credit for all her work and then parlayed it into an empire.

Big Eyes primarily seems to exist as a showcase for two fine performances — Adams' honest emoting in one corner, Waltz's bombastic showboating in the other — but the film also touches upon the difficulties faced by women (particularly single ones) in the 1960s. More pointedly, it looks at how one woman's decision to remain silent about a cruel deception ("Lady art doesn't sell," Walter tells her) enforces the notion that spousal abuse doesn't always have to take the form of physical violence. Like Margaret Keane's artwork, Big Eyes catches viewers with its surface quirks, but there's also something taking place underneath the surface.