Belmont Playboys close in on 20 years of music 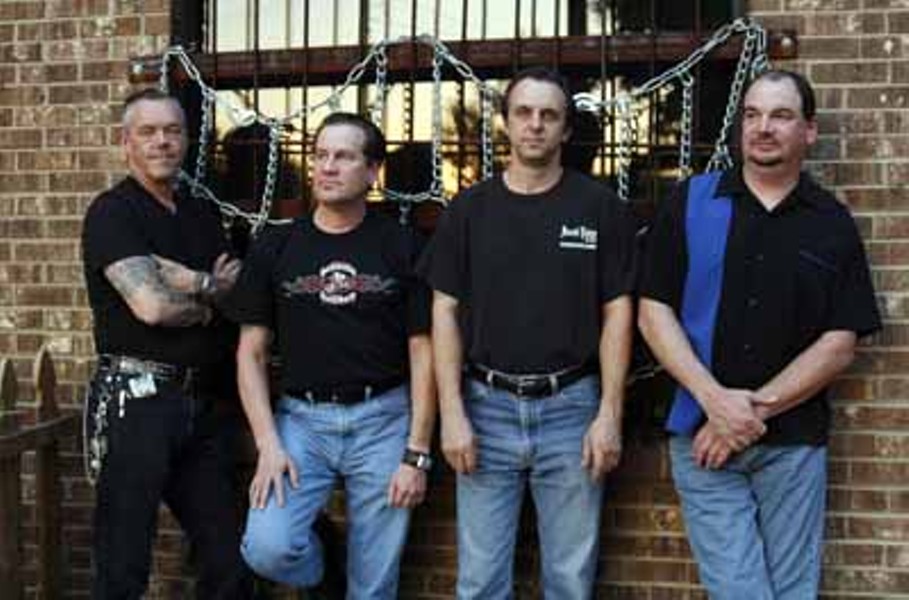 Tremont Music Hall on Aug. 23 at 9 p.m. with Jem Crossland & The Hypertonics and Tommy Ray and the Rayguns. Tickets are $8 in advance and $10 on the day of the show.

With his slicked back hair beginning to show some grey, Mike Hendrix sparks up another Camel light with his Zippo lighter. The words "BANG" and "ZOOM" tattooed across his knuckles are just two of the 20-something works of art that adorn his body as he takes another drag off the smoke.

His voice has a growl to it -- the combination of smoke, singing and whiskey. There's no surprise to see his black button-down shirt covered in skulls. At first sight, you can tell that music runs through this man's veins; he'd be ready to get up on a stage at a moment's notice.

For nearly 20 years, Hendrix, who grew up in Mt. Holly, has been the frontman/singer/guitarist of The Belmont Playboys, a staple on the Charlotte music scene. The band started in 1989, when Hendrix and Jake Berger were hanging around at the Double Door Inn and decided to start a rockabilly band. Berger left the band after one year, but the band still goes on.

"A lot of people call us and want us to play a weekender or festival or car show," Hendrix, who writes for Outlaw Biker magazine and vents his political frustrations on the Web site, Coldfury.com, says. "If it sounds like it's something that would be fun to do, if we can get the money where we can afford to do it, we do it."

The roots of the Playboys are as much in punk as they are in rockabilly. Hendrix, 48, originally played in punk bands around the area and the Playboys' sound has been known to irk a fair share of rockabilly traditionalists.

"There are a lot of dedicated people who have a whole lifestyle around it," Hendrix, who started playing guitar in his early teens, says. "We don't always fit in well with those people. We piss 'em off and I try to piss 'em off. For a while I wore eyeliner and black nail polish just to piss 'em off. It's amusing to me. We always tried to stretch the boundaries."

Though they've played thousands of shows in the past -- a highlight is opening for Little Richard for a few nights in New York -- the band doesn't play nearly as many as they used to, but they never officially took a break. Hendrix says it got tougher to tour after the events of Sept. 11, 2001, when people didn't go out as much, making it more difficult to earn a living on the road. The band used to play in New York once every six weeks or so, but the increase in gas prices have made it less than worthwhile.

These days, Hendrix stays busy with two other bands -- Jeff Clayton & The Mongrels and The Parodi Kings -- while guitarist Chipps Baker also has two other gigs -- playing bass with Jem Crossland & The Hypertonics, as well as The Rhythm Busters. The band has gone through a handful of lineup changes -- Mike's brother, Jeff (bass), left the band at one time, but has since returned. Mark Painter is behind the drums.

It's no surprise that Hendrix stays busy playing music, as playing guitar has almost become a form of therapy for him. On July 20, 2007, his wife, Christiana, was killed in a motorcycle wreck. Hendrix, who witnessed the accident, doesn't talk much on the subject. When a tribute show was held shortly after the day, the crowd was shocked to see him perform with the Playboys. "I wasn't going to do it, but playing guitar was like a lifeline coming out," he says. "It's an addiction. No matter what other groups I've played with, I don't get the feeling that I get playing with the Playboys. I don't know what it is, but it's magical. I can't imagine not having that in my life. It's what I'm supposed to be doing."

The band has gone through its share of label troubles and once nearly signed with Epitaph, but now works independently. In total, the band has had five releases -- a cassette (Hit the Road), three studio albums (Drive-In Rhythm, Wolf Patrol, Hot Rod Heart) and a live disc (One Night of Sin) -- and Hendrix says they're slowly working on recording a new album.

"We hope to do a new record of all-new studio stuff if we can just get the time to do it," he says. "That's always the trick. There are a couple of things on the live record that we never did in the studio, so we might throw that on there."

As for planning an event for the band's 20th anniversary, Hendrix says he'll have to give that more thought. "I haven't thought about it, but ANTiSEEN's doing all their anniversary shit, so it would be a cool thing to do," he says with a laugh. "When we all get together and play or tour, it's just a hoot. It's always been a good time and that's the way it should be."