'All Superheroes are Vegan'

Charlie Foesch laughs maniacally when I ask about the superhero theme at Bean Vegan.

"Now, this is very subversive," he says in a near whisper, then grins like the Cheshire Cat. He points to the huge Captain America cutout that greets patrons when they enter Bean Vegan Cuisine, then motions to the back, behind the bar, where rows of action figures sit, ready to spring to life. 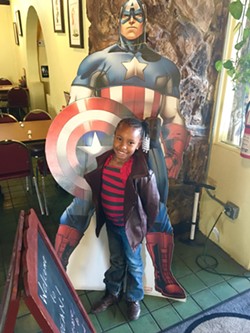 "So, we had this idea for a vegan restaurant, right? We had very specific ideas about the food — we wanted it to be Southern comfort food. But we weren't restaurant designers," Foesch says, and the drab yellow walls surrounding him confirm his point. "None of us were interior designers. We really didn't know what we wanted the look of the restaurant to be."

Foesch's eyes light up. "But I'm a comic-book fan," he says, tugging at his X-Men T-shirt. "I mean, obviously." The shirt is black with a large circle on the front featuring Wolverine in the middle surrounded by Storm, Cyclops, Colossus, Beast and Jean Grey, aka Phoenix. "I've always been a fan of comic books. I'm a fan of Shelton Drum [owner of Charlotte's Heroes Aren't Hard to Find comic shop] and the Heroes Convention, and all that stuff."

When Bean first opened, Foesch would spend most of his waking hours at work. "Anyone who's ever opened a restaurant will tell you: It's an adventure. Lots of long hours, lots of time in the restaurant. I told Roy and Kandice, 'Look, if I've got to spend all this time in here, from morning to night, I need some stuff around me that makes me feel like I'm at home."

He started bringing his action figures in to keep him company. Before long, customers were bringing him comic-themed gifts to display at Bean. "People really responded to it and appreciated it as this cool thing, and it just took on a life of its own. So we started intentionally adding more and more.

"Now, we have comic-book artists coming in and they bring stuff for us, too," he says. "When the Heroes Convention is going on, this place gets packed."

Foesch was pleasantly surprised to find so many vegans among his fellow comic geeks. "A lot of comic artists and creators are vegan, and they travel here from all over the country to the Heroes Convention, and of course, they come in here to eat because it's vegan, and they see all the comic book stuff, and then we have them for life. It's a win-win — for me, anyway."

The comic theme gives Bean a sense of playfulness that some of the more serious, new-agey vegan restaurants don't have.

"We're definitely not trying to take ourselves too seriously," Foesch says. "But there's room for everybody, and I love going to the different vegan restaurants in town that have a more structured style or that are maybe a little more high-end. We just wanted to make ours more accessible for people who like to eat out a few times a week and get a good value and feel good about themselves.

"We also wanted to create a family-friendly environment," he adds, "and kids love comic book stuff, so it makes it more accessible for them, too."

"It's clear to me that all superheroes are vegan," Foesch says. "They just gotta be!"