BATMAN V SUPERMAN: DAWN OF JUSTICE (2016). Frenzied fanboys hopped up on hype and hysteria will disagree, but 2013's Man of Steel proved to be one of the worst superhero films to ever swoop onto screens, a mausoleum of morbidity, miscues and crippling melancholia. The good news is that the inevitable follow-up is far better than its predecessor. To be sure, it's a mess, but it's often a fascinating mess. The film begins by addressing the civilian deaths that racked up at the end of MoS, and many civilians and politicians are left wondering whether Superman (Henry Cavill) is a hero or a villain. The debate is never an entirely convincing one, and it doesn't help that Cavill's granite-face acting makes his character seem less like someone grappling with guilt and more like someone debating whether his indigestion is acute enough to warrant taking an Alka-Seltzer. Batman's conflicts, on the other hand, feel painfully real: Well-played by Ben Affleck, this Caped Crusader is more sadistic than ever, branding his criminal captives like cattle and inspiring fear even in those he's trying to rescue. As the title promises, the two heroes eventually mix it up, with Wonder Woman (Gal Gadot) added to the equation almost as an afterthought; it's all part of a master plan perpetrated by cracked millionaire Lex Luthor. Jesse Eisenberg is clearly having fun in the role, but it's hard to see this twitchy goofball as Luthor — instead, he's more like Richie Rich by way of Heath Ledger's Joker, and about as menacing as a Pomeranian nipping at the heels.

The Blu-ray contains both the 151-minute theatrical version and a 182-minute extended edition; the new three-hour cut is worth the watch, since it actually includes scenes of merit rather than just filler. Extras include a featurette on the titular heroes; a look at Wonder Woman; a study of Lex Luthor; and a piece on the Batmobile. 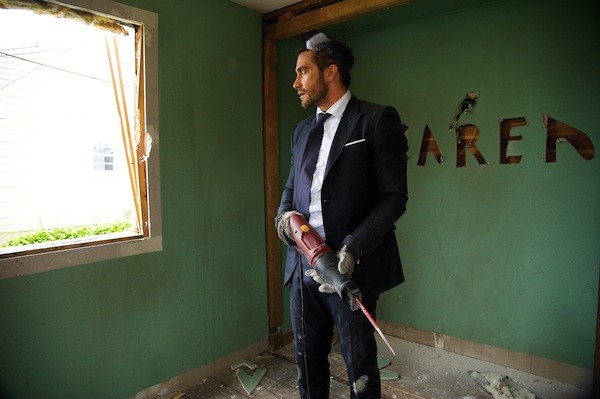 DEMOLITION (2016). With Demolition, viewers are once again expected to feel sorry for a pampered, well-to-do white guy who can't feel anything for anyone else. Here, it's Davis Mitchell (Jake Gyllenhaal), who ends up in a dazed and confused state after his wife (Heather Lind) is killed in a car accident. Much to the anger of his father-in-law (Chris Cooper), Davis is no longer sure what he feels about anything, but he does come to realize that he didn't love his wife. He begins sending a flurry of letters to an unlikely recipient — it's a narrative device that was also seen in About Schmidt, only here the sender actually gets to meet the person receiving his missives. That would be Karen Moreno (Naomi Watts), a single mom dealing with a troubled, foul-mouthed son (Judah Lewis) and maintaining a dreary relationship of convenience with a drab co-worker (C.J. Wilson). Director Jean-Marc Vallée, whose last two films (Wild and Dallas Buyers Club) both made my 10 Best lists in their respective years (here and here), finds himself working from a shakier script this time around, with writer Bryan Sipe cramming his pages with all manner of daft incidents that might best be described as precious. But wipe away all the clichéd clutter and there's actually a worthy story here, an affecting tale of a man who has to deconstruct his life in order to put it back together in a way that makes sense. Gyllenhaal adds to his gallery of enigmatic and emotionally repressed characters with another dazzling performance — he's never less than terrific, even in those moments when the movie surrounding him threatens to completely collapse.

DVD extras consist of a photo gallery and trailers. 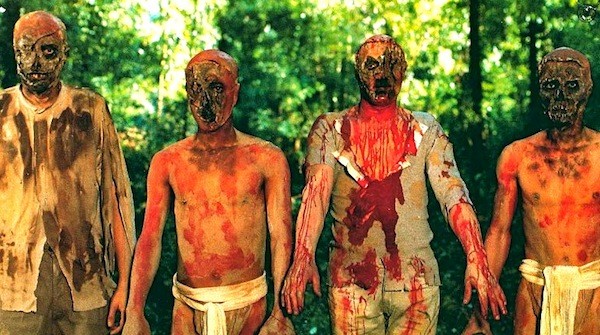 DOCTOR BUTCHER, M.D. / ZOMBIE HOLOCAUST (1980). As actor Ian McCulloch notes in an interview included in this two-disc Blu-ray edition, Zombie Holocaust could easily have been called Cannibal Holocaust had another Italian gorefest from the same period not already snagged that title. Either moniker gives a pretty good indication of what to expect from this exploitation yarn (banned, like many others from that time, in numerous countries across the globe) in which a small group investigating odd events stateside traces the mystery to a remote island, only to discover it's overrun by flesh-eating natives and shambling zombies. Zombie Holocaust was re-edited and renamed Doctor Butcher, M.D. (the M.D. standing for Medical Deviate) for the American grindhouse circuit, and the fact that the title and the tagline ("He is a depraved, sadistic rapist; A bloodthirsty, homicidal killer ... and He Makes House Calls!") completely misrepresented the picture didn't stop it from being embraced by audiences appreciative of the outlandish makeup designs as well as the imaginative deaths and dismemberments on view. If McCulloch looks familiar, that's because he also starred in an even more notorious grindhouse fave, the 1979 Italian hit Zombie.

Blu-ray extras include separate interviews with McCulloch, co-star Sherry Buchanan, editor Jim Marcovic, and effects artists Rosario Prestopino and Maurizio Trani; a discussion of Zombie Holocaust director Marino Girolami by his son, filmmaker Enzo G. Castellari; "Experiments with a Male Caucasian Brain (... and other memories of 42nd Street)," an entertaining illustrated essay by documentary filmmaker Gary Hertz (Fulci of the Apocalypse, Life After Dead: The Ladies of The Evil Dead); and theatrical trailers. 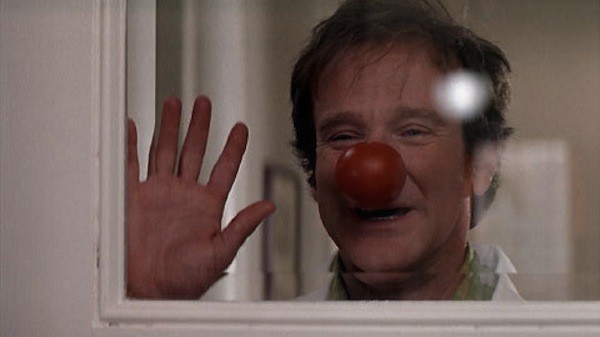 PATCH ADAMS (1998). The worst film of 1998 was also one of the worst films of its entire decade, but that didn't stop it from becoming a $135 million hit and a movie adored by the masses (as a theater manager told me after a packed screening back in the day, "This movie's terrible, but the audience gave it a standing ovation"). Certainly, the picture stinks on ice, but it panders so shamelessly in an effort to manipulate every conceivable human emotion that it was instantly embraced by easy-to-please filmgoers (I also recall that the woman who sat next to me at the advance screening identified herself as a "Joy Germ" and giggled and clapped throughout). Robin Williams (in a cloying performance) plays a medical student who demonstrates his belief in the adage "Laughter is the best medicine" by doing whatever it takes to bring smiles to the faces of the ill people around him — this includes dancing with bedpans on his feet and swimming in a pool filled with 12,000 pounds of wet noodles. But his unorthodox behavior stirs the wrath of the university's humorless dean (Bob Gunton), who you know is the bad guy because his face is often lit from underneath, thus giving him that menacing aura usually reserved for rapists and serial killers. Patch also annoys a fellow physician (Philip Seymour Hoffman) who's actually the most sensible character in the film but is treated by the hack filmmakers as a lout simply because he won't wear a clown nose like the insufferable Adams. Patch Adams is offensive in the way it trots out every hoary plot device, no matter how improbable, exploitative or downright moronic. But judge for yourself: You'll either laugh, cry and squeal with delight, or you'll groan, curse and dry-heave with uncontrollable abandon. Incidentally, the film is based on a real individual, Hunter "Patch" Adams — needless to say, he despises the picture. 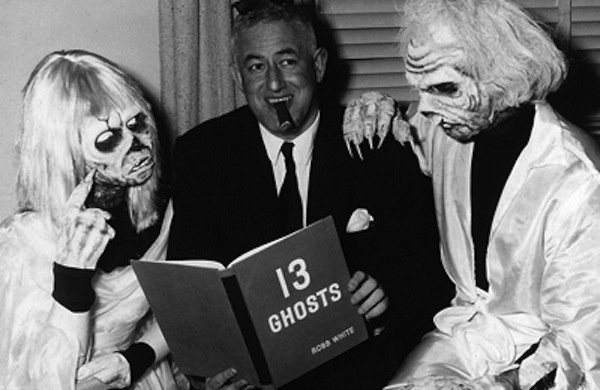 WILLIAM CASTLE DOUBLE FEATURE (1960-1963). A release closer to Halloween might have made more sense, but Mill Creek has opted to go ahead and release two separate double feature Blu-rays containing movies produced by the legendary filmmaker and showman.

13 Ghosts (1960) is slender but fun, as mild-mannered museum guide Cyrus Zorba (Donald Woods), wife Hilda (Rosemary DeCamp), teenage daughter Medea (Jo Morrow) and young Buck (Charles Herbert) inherit a strange mansion bequeathed to them by Cyrus' late uncle, Plato Zorba (are these great character names or what?). It turns out that not only is the house haunted, it also contains a large fortune stashed away by the deceased, demented relative. Margaret Hamilton, The Wizard of Oz's Wicked Witch of the West, appears as the estate's mysterious housekeeper; this is also the rare film to prominently feature a Ouija board.

Castle clearly was influenced by (and often mimicked) Alfred Hitchcock, and Homicidal (1961) is such a blatant rip-off of 1960's Psycho that a lawsuit probably wouldn't have been without merit. Yet while traveling along similar lines, Castle and scripter Robb White manage to include enough originality that the shock ending still has the power to catch many viewers off guard. Unlike Psycho, this film's central blonde (played by Joan Marshall) is villain rather than victim, yet there's still a squeaky-clean heroine, her dullard boyfriend, a crotchety old woman in a wheelchair, and a soft-spoken young man. To reveal more would be criminal. 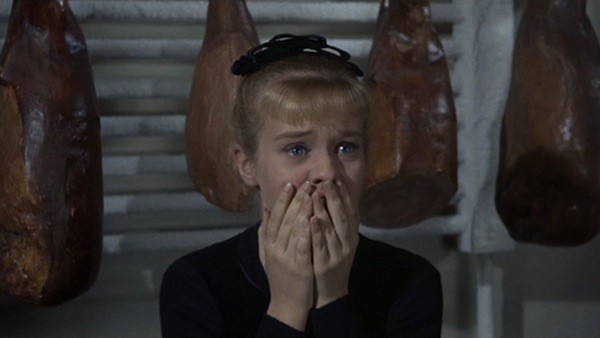 The period tale Mr. Sardonicus (1961) relates how an Eastern European peasant (Guy Rolfe) is forced to dig up his late father's grave in order to retrieve a winning lottery ticket. The gruesome endeavor leads to fortune but also brings on a curse that leaves the man's face frozen in a permanent, grotesque grin. Now a baron, Sardonicus summons his wife's (Audrey Dalton) former lover, a renowned London doctor (Ronald Lewis), to cure him of his affliction ... or else. This handsome but occasionally meandering drama admittedly makes creative use of several nasty leeches.

13 Frightened Girls (1963) actually reveals 14 girls in some group shots and 15 in others, but such sloppiness quickly becomes the norm in this daft espionage yarn that emerges as perhaps the worst film Castle ever made. A trio of decent actors (All About Eve's Hugh Marlowe, Jaws' Murray Hamilton, The Manchurian Candidate's Khigh Dhiegh) find themselves surrounded by rank amateurs in this story of a diplomat's perky teenage daughter (the dreadful Kathy Dunn) who uses her position of privilege to steal Cold War secrets in order to aid the U.S. This was originally set to be called The Candy Web (the heroine's name is Candy, you see), but it's a turkey under any moniker.

Each Double Feature edition is sold separately; one set contains 13 Ghosts and 13 Frightened Girls, while the other houses Homicidal and Mr. Sardonicus. There are no extras in either edition.