BARTON FINK (1991). Being the first film to win three top prizes at Cannes (Film, Director and Actor) couldn’t prevent Barton Fink from flopping when it finally opened stateside. Nevertheless, this remains one of the most fascinating pictures on the Coen Brothers ledger, with Joel and Ethan serving up a compelling seriocomedy that yields added pleasures with every repeat viewing. John Turturro stars as the title character, a self-absorbed New York playwright who ends up in Hollywood to write a Wallace Beery wrestling picture for a "B" studio run by a dictatorial blowhard (a funny Michael Lerner). Staying at a ramshackle hotel (cue Steve Buscemi as chatty Chet the bellboy), Barton ends up suffering from a paralyzing case of writer’s block. He also ends up befriending both a traveling salesman (an amazing John Goodman) and a Faulkner-like writer (John Mahoney), only to find his life soon turning into a surreal nightmare. A complete original, Barton Fink is edgy, innovative, and often ambiguous in its intentions. Although Roger Deakins’ exceptional cinematography won awards from all three major critics’ groups (NY, LA, National Society), the Academy elected to ignore it completely. The movie did pick up a trio of Oscar nominations for Best Supporting Actor (Lerner), Best Art Direction-Set Decoration (Dennis Gassner and Nancy Haigh, who won for their other 1991 feature, Bugsy), and Best Costume Design.

Blu-ray extras include interviews with Turturro and Lerner; deleted scenes; and the theatrical trailer.

8 HEADS IN A DUFFEL BAG (1997). With 8 Heads in a Duffel Bag, Joe Pesci seems to have been inspired by the monologue delivered by his character Tommy DeVito in 1990’s GoodFellas. “I'm funny how? I amuse you? I make you laugh; I'm here to fuckin' amuse you? How am I funny?” Pesci’s 8 Heads character, a gangster also named Tommy, is basically the comedic version of his Oscar-winning part in the Scorsese classic — this Tommy similarly has no problem hurting people, but he’s more likely to fret and fume and partake in exaggerated fits of exasperation. Tasked with delivering a bag crammed with human heads in order to prove that a mob hit has been carried out, he ends up in a dire predicament when a college kid named Charlie (Andy Comeau) accidentally grabs his luggage and carts it off to Mexico, thinking it contains his clothing. Charlie is naturally horrified when he unpacks the noggins, while Tommy just wants them back — this leads to whirlwind developments involving Charlie’s roommates (David Spade and Todd Louiso), his girlfriend (Kristy Swanson), and her disapproving parents (George Hamilton and Dyan Cannon). A frantic pace is no match for a scarcity of laughs, and while Pesci is consistently amusing, he receives little assistance from anyone else. Spade and Louiso have their moments but wear out their welcome; Comeau and Swanson are too vanilla for this sort of madcap romp; and Hamilton and Cannon are left adrift under the guidance of writer-director Tom Schulman.

GUARDIANS OF THE GALAXY VOL. 2 (2017). As expected, the entire gang from the 2014 smash is back, with Peter Quill (Chris Pratt), Gamora (Zoe Saldana), Drax (Dave Bautista), Rocket (voiced by Bradley Cooper) and Baby Groot (voiced by Vin Diesel) enjoying their newfound status as celestial celebrities. But after ticking off the members of a powerful race, the heroes-for-hire find themselves on the run, with Gamora’s sister Nebula (Karen Gillan) and Quill’s mentor Yondu (Michael Rooker) forced to join the motley crew along the way. Half of the gang end up on a planet alongside Peter’s long-lost father Ego (Kurt Russell) and his servant Mantis (Pom Klementieff); the others find themselves held prisoner after a mutiny by Yondu’s Ravagers. The jokey demeanor that informed the first picture remains, even if writer-director James Gunn forces too many gags. And as is the case with many superhero sagas, this one doesn’t know when to quit, with a generous 136-minute running time mostly felt during the CGI-choked finale. But the freshness of the characters remains intact, and the actors continue to interact in a manner that supports the story’s narrative spine involving the notion that family – no matter how one defines it – always comes first (in this respect, the series has much in common with Diesel’s other, similarly fast and furious franchise). Gunn’s scripting and Gillan’s performance bring unexpected poignancy to the part of Nebula, while Rooker’s excellent turn allows Yondu to emerge as the most unexpectedly complex character in the story. 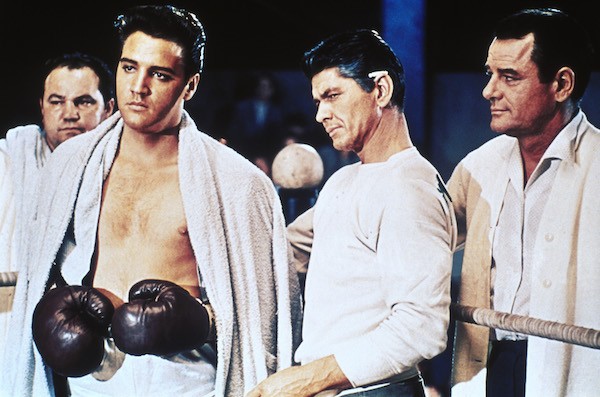 KID GALAHAD (1962). What do Woody Allen and Elvis Presley have in common? Both have been treated right by the Twilight Time label, which has seen fit to release many of these artists' best films on Blu-ray. While Allen fans have been offered such gems as The Purple Rose of Cairo, Zelig and Everything You Always Wanted to Know About Sex * (* But Were Afraid to Ask), devotees of The King have been able to enjoy Flaming Star and Follow That Dream, two of the grandly entertaining pictures he made before his vehicles became too beholden to rigid formula and too affected by spiraling quality control. Now joining the pair is Kid Galahad, which originally hit theaters four months after Follow That Dream, thus providing audiences with an irresistible one-two punch. The boxing terminology is apt, since this one finds Elvis playing Walter Gulick, a young pugilist whose gallantry toward women earns him the nickname Kid Galahad. With his easygoing demeanor and warbling of several catchy tunes, Presley could effortlessly carry this picture himself, but that’s actually not required thanks to the efforts of an excellent supporting cast: Gig Young as Galahad’s unscrupulous manager, Charles Bronson as his trainer, Joan Blackman as his love interest, and Lola Albright (who passed away this past March at the age of 92) as Young’s perpetually patient paramour. Incidentally, Kid Galahad is a remake of a same-named 1937 film starring Edward G. Robinson, Bette Davis, Humphrey Bogart and (as the title boxer) Wayne Morris. When will Warner Bros. finally bring that version to Blu-ray?

WHALE RIDER (2003). Currently appearing in supporting stints on two television shows (Game of Thrones and Manhunt: Unabomber), Keisha Castle-Hughes deservedly earned a Best Actress Academy Award nomination for her startling film debut in the New Zealand hit Whale Rider. Castle-Hughes stars as Pai, a 12-year-old girl who had survived a difficult birth that killed her mother and twin brother. Pai is a descendant of Paikea, who, as the legend goes, first arrived in what would become this Maori clan's village riding on the back of a whale. Pai displays all the characteristics that would enable her to one day become the village leader, but because she's female, her tradition-minded grandfather (Rawiri Paratene) dismisses her from consideration, showing controlled love for her as his flesh and blood but lashing out whenever she attempts to step outside what he perceives as her lot in life. Adapted from Witi Ihimaera's 1986 novel by writer-director Niki Caro (who earlier this year helmed the fine WWII drama The Zookeeper’s Wife), Whale Rider is above all a moving story about a young girl's efforts to not only find her place in the world but also receive the deserving respect of a patriarch whose own stubbornness blackens an otherwise noble spirit. As Pai, Castle-Hughes delivers a clear-headed performance that, like the film which embraces it, never succumbs to cloying sentiment but instead finds heartbreak and hope in a naturalistic manner.

Blu-ray extras include audio commentary by Caro; a behind-the-scenes featurette; and deleted scenes.

13 GOING ON 30 (2004). Kicking off in 1987, this charming comedy centers around 13-year-old Jenna Rink, an awkward girl whose only desire is to be "thirty, flirty and thriving." She magically gets her wish granted, waking up in 2004 at the age of 30 and not remembering anything that has transpired over the course of the last 17 years. For emotional support, she tracks down her best friend from childhood, now a freelance photographer (Mark Ruffalo), but as she begins to piece together her teenage and adult years, she realizes that she doesn't like the person she's become. Jennifer Garner is delightful as the grownup Jenna — she possesses the flair and instincts of a screwball comedienne, and it’s a shame movies haven’t been utilizing her more — and if her performance ultimately isn't quite as moving as Tom Hanks' in the thematically similar Big, that might be because the script by Josh Goldsmith and Cathy Yuspa (the husband-and-wife team behind What Women Want) doesn't delve as deeply into the dark side of being a child trapped inside an adult's body. (Netflix Streaming)