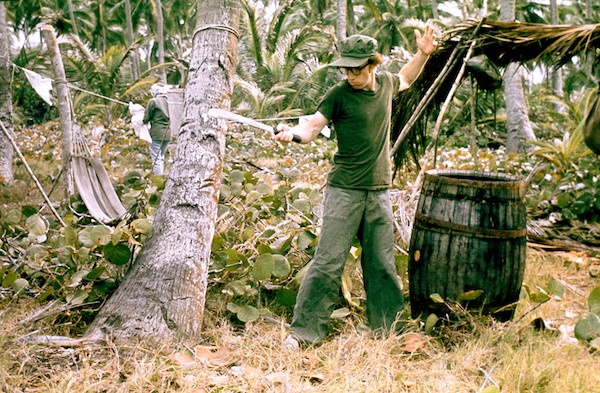 BANANAS (1971). The 1969 release Take the Money and Run was Woody Allen’s first movie as writer-director-star, but it was his sophomore effort that jump-started a highly lauded – and highly lucrative – run throughout the entirety of the 1970s. Bananas finds the comic auteur cast as Fielding Mellish, a bumbling schlep who ends up leaving the comfy confines of NYC in order to take part in a revolutionary uprising in the fictional Latin American country of San Marcos. The film gets off to an uproarious start with Howard Cosell covering a political assassination for ABC’s Wide World of Sports — from there, the focus shifts to Fielding as he woos a stateside activist (Louise Lasser, whose five-year marriage to Allen had ended in 1970), contends with subway thugs (including one played by an uncredited Sylvester Stallone in one of his earliest appearances), and discreetly tries to purchase a smut magazine. Once Fielding arrives in San Marcos, the shenanigans become even more outrageous, with our hapless hero eventually (and reluctantly) taking over as president of a country whose claims to fame are hernias and locusts. A sizable number of classic quips can be found contained in this picture – choosing a favorite is a daunting task, although I’d have to go with Lasser’s Nancy telling Fielding that he’s immature “emotionally, sexually, and intellectually,” to which he replies, “Yeah, but what other ways?” 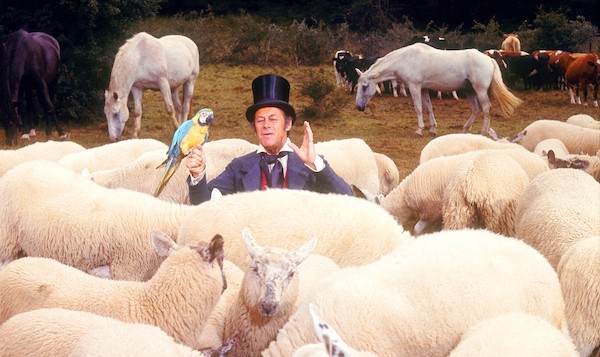 DOCTOR DOLITTLE (1967). Members of the Hollywood Foreign Press Association (aka givers of Golden Globes) have long been accused of exchanging votes for favors, but the members of the Academy of Motion Picture Arts and Sciences have also been found guilty of similarly sleazy behavior. As Exhibit A, consider Doctor Dolittle, a dreadful musical that bombed with audiences and critics when it debuted back in 1967. Nevertheless, the suits at 20th Century Fox sent out an in-house memo that read, “Each screening will be preceded by champagne or cocktails and [followed by] a midnight buffet supper. Doctor Dolittle is the studio’s prime target for Academy Award consideration.” The offer of free food worked beautifully, and Academy voters shamelessly nominated this debacle for Best Picture (thereby rubbing shoulders with the landmark likes of The Graduate and Bonnie and Clyde). Rex Harrison stars as the man who’s able to converse with all manner of beasts, but he’s so bored in the part that all he can offer is a dinner-theater reprisal of My Fair Lady’s Henry Higgins. A similar state of ennui also affects anyone unlucky enough to catch this laborious production, a boondoggle noticeably lacking in charm or wit. Doctor Dolittle nabbed a total of nine Oscar nominations, and while a couple were deserved (Best Cinematography and Best Art Direction-Set Decoration), its dubious victories were in the categories of Best Song (the wince-inducing ditty “Talk to the Animals”) and Best Special Effects (presumably for that tacky Great Pink Sea Snail).

Blu-ray extras consist of audio commentary by scripter-songwriter Leslie Bricusse and film historian Mike Matessino; the 1998 A&E Biography episode “Rex Harrison: The Man Who Would Be King”; the theatrical trailer; and an isolated music track. 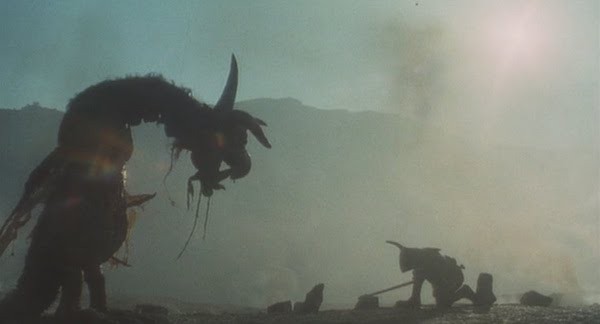 JABBERWOCKY (1977). The Monty Python gang enjoyed tremendous success with 1975’s Monty Python and the Holy Grail, and Jabberwocky finds several of the troupe members reuniting for another romp through muddy, medieval times. Terry Gilliam serves as co-writer (with Charles Alverson) and director, Michael Palin tackles the leading role, and Terry Jones pops up in a cameo – they all strive to create another comedy in the hallowed Python tradition, but the result is decidedly hit-and-miss. Using Lewis Carroll’s nonsensical poem as inspiration, this finds the dimwitted Dennis Cooper (Palin) leaving his small burg and venturing to the big city, where he hopes to find gainful employment. Instead, he ends up in one scrape after another, and this succession of events leads to him finally coming in contact with the hideous monster that’s been munching on the local populace. Gilliam enjoys exposing the idiocy of the working class and the hypocrisy of the ruling class, and he also doesn’t shy away from showcasing the era’s filth and squalor (for better or worse, you can almost smell the execrable aromas in the air). But the expected laughs don’t always materialize, and the script is too scattershot to maintain much momentum.

Blu-ray extras include audio commentary (from 2001) by Gilliam and Palin; a new making-of featurette; a new interview with Valerie Charlton, designer of the Jabberwocky creature; a 1998 audio interview with cinematographer Terry Bedford; and the original UK opening sequence. 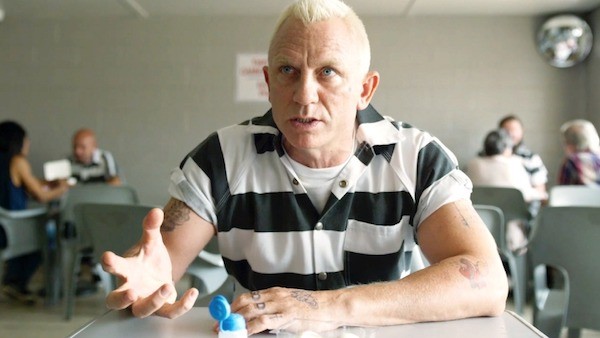 LOGAN LUCKY (2017). Steven Soderbergh, who was responsible for those largely middling Ocean’s flicks starring George Clooney and Brad Pitt, returns to the scene of the same type of crime with his latest effort, which similarly follows the planning and execution of a major heist. In this case, the seemingly impossible robbery is being attempted by a band of down-and-outers, among them siblings Jimmy, Clyde and Mellie Logan (Channing Tatum, Adam Driver and Riley Keough) and a loopy con named Joe Bang (Daniel Craig). Their target? The NASCAR coffers at Charlotte Motor Speedway, filled to the brim during the Coca-Cola 600 over Memorial Day Weekend. There are precious few characters here who don’t look and sound like they just got back from molesting Ned Beatty alongside the Georgia river (one of the few exceptions is an arrogant British race car driver played unconvincingly by Seth MacFarlane), and the script by Rebecca Blunt (suspected by many to be a pseudonym for Soderbergh) veers between treating these characters with care and treating them with condescension. That’s probably the proper way to frame these types of willfully myopic yokels, but it leads to too many passages buckled by an overbearing affectedness. Indeed, Logan Lucky isn’t that much different from last year’s Masterminds, which suffered horrible reviews while this one was overpraised upon its theatrical release. Honestly, the difference between the pair isn’t that pronounced, although this one definitely comes out on top thanks to a solid second half (due to some satisfying plot intricacies) and some sharper performances. Tatum is especially fun to watch as Jimmy Logan, although it’s Craig who steals the film as the live-wire Joe Bang.

The only Blu-ray extras are deleted scenes. 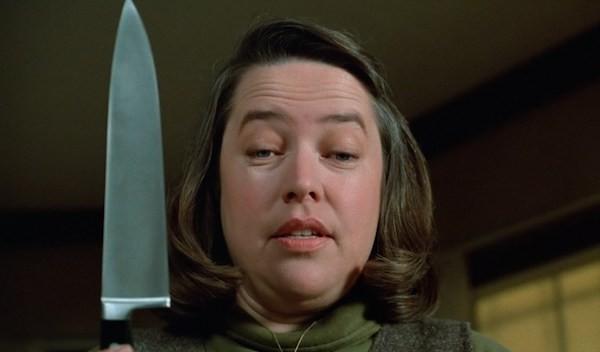 MISERY (1990). Based on Stephen King’s novella The Body, director Rod Reiner’s 1986 sleeper hit Stand By Me was so adored by the author that he agreed to allow Misery to be made into a movie as long as Reiner was involved. The result was another box office success, as well as the first (and, to date, only) Stephen King film to actually win an Academy Award. That would be the Best Actress Oscar given to Kathy Bates – she’s terrific as Annie Wilkes, the self-proclaimed Number One Fan of bestselling author Paul Sheldon (James Caan). After Paul’s car careens off the road during a particularly nasty snowstorm, it’s Annie who rescues him and nurses him back to health in the comfort of her home. But what Paul only gradually comes to realize is that Annie isn’t exactly normal, and that there’s a good chance he’ll never leave her house alive. Reiner’s direction and William Goldman’s script are serviceable, but what really puts Misery over the top are the performances. Bates alternates effortlessly between tender and terrifying, folksy and frightening; Caan is solid in a less showy role; Lauren Bacall adds some snap as Paul's concerned agent; and Richard Farnsworth offers a lovely turn as the local sheriff investigating Paul’s sudden disappearance. 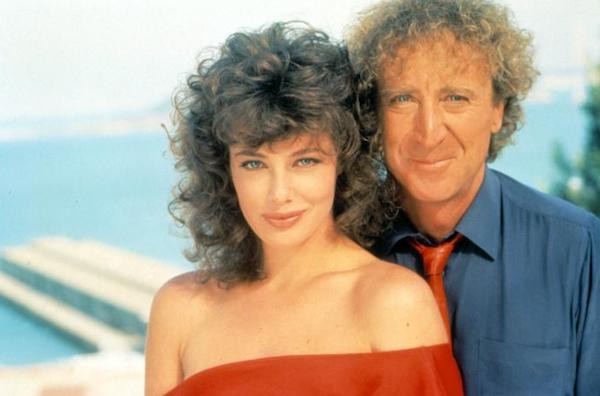 THE WOMAN IN RED (1984). For approximately a 10-year stretch running from the mid-1980s to the mid-90s, Hollywood was obsessed with remaking French farces, resulting in hits like Three Men and a Baby and The Birdcage and flops like The Man with One Red Shoe and Mixed Nuts. The Woman in Red fared well enough, emerging as a modest box office success and even winning an Academy Award (Best Original Song for Stevie Wonder’s chart-topping single “I Just Called to Say I Love You”). Based on the 1976 film Pardon Mon Affaire, this stars Gene Wilder (also serving as writer and director) as Teddy Pierce, an ad agency executive with a loving wife (Judith Ivey) and a couple of kids. Teddy opts to risk his domestic bliss after he spots supermodel Charlotte (Kelly LeBrock) gyrating over an air grate a la Marilyn Monroe – consumed with lust, he decides that he will do anything to meet and bed this beautiful woman. What follows is a rather tepid comedy of errors, as Teddy is caught in a number of awkward situations – not least being that his secretary (Gilda Radner, Wilder’s real-life wife) erroneously believes that he’s pursuing her. The talented Wilder isn’t particularly funny in this picture, although his charm prevents the material from ever getting too seamy or smarmy. Charles Grodin offers solid support as the most dependable of Teddy’s colleagues, although the material involving Joseph Bologna, cast as Teddy’s womanizing buddy, seems more suited to a John Cassavetes drama than this lightweight romp. 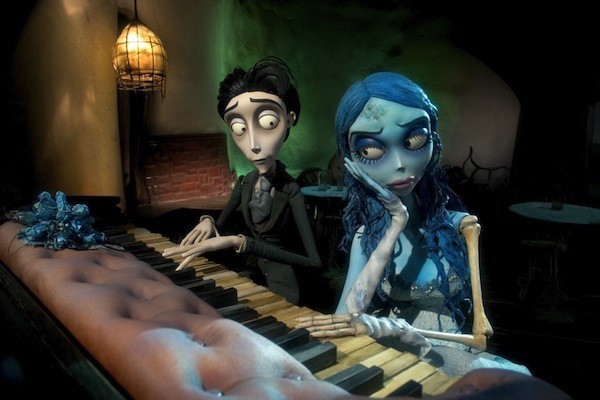 CORPSE BRIDE (2005). A fine mix of rot and romance, this Academy Award nominee for Best Animated Feature finds Tim Burton’s go-to guy Johnny Depp providing the voice of a shy Victorian lad who's set to marry a demure lass (Emily Watson). Instead, he accidentally ends up wed to the title character (Helena Bonham Carter), a lovely (if decaying) young woman who drags him to the Land of the Dead, which resembles nothing so much as a jazz joint populated by beer-swilling skeletons, men with hacked up bodies, and a buck-toothed maggot who sounds like Peter Lorre. With this picture, Burton returns to the stomping ground of his previous foray into stop-motion animation, 1993's The Nightmare Before Christmas. Christmas featured better songs, more interesting characters and a darker sensibility, yet this still qualifies as a marvel of imagination: While the movie is light on boisterous laughs, its visual wit never ceases to delight. (Netflix Streaming)