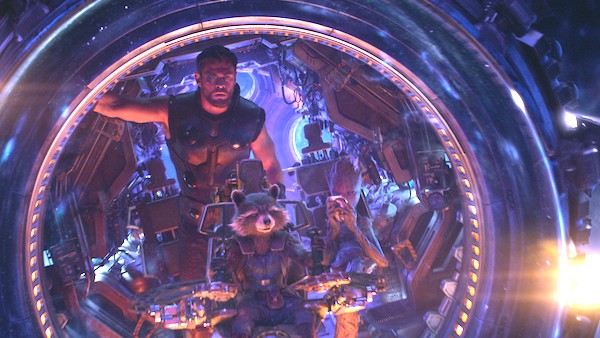 Death be not proud in Avengers: Infinity War, but it certainly is loud. This 19th entry in the Marvel Cinematic Universe — a hermetically sealed franchise that began with Iron Man back in 2008 and most recently added February’s Black Panther to its ranks — is full of sound and fury and Dolby-enhanced CGI battles. But only the haters would claim that it signifies nothing – instead, it’s the semi-culmination of all the pictures that have preceded it (I say semi because it’s only the first half of a two-parter that will conclude next summer). It’s also the darkest, the grimmest, and the most downbeat of all Marvel movies, with countless websites anticipating its solemnity by laying odds on which characters would meet their maker (be it God or Stan Lee) over the course of its 150-minute running time. So it’s not really a spoiler to note that a few characters die permanently, some die temporarily, and some live to fight another day.

The war being waged is against Thanos (Josh Brolin), a powerful being who has been collecting the Infinity Stones (see previous pictures for the scoop) with the same myopic determination as someone participating in the Pokemon GO phenomenon. Once he has accumulated all six baubles, Thanos will be able to rule the universe in any way he sees fit, and his way basically involves intergalactic genocide. Seeking to prevent him from obtaining all the stones are the Avengers and the Guardians of the Galaxy, with an occasional outlier thrown in for good measure. There are the three Chrises — Evans as Captain America, Hemsworth as Thor, and Pratt as Peter Quill — and the two Sherlocks — Robert Downey Jr. as Iron Man and Benedict Cumberbatch as Dr. Strange. Black Widow (Scarlett Johansson) and Black Panther (Chadwick Boseman) are also on hand. Even your friendly neighborhood Spider-Man (Tom Holland) takes part in the melee.

Clearly, heroes aren’t hard to find in Avengers: Infinity War – indeed, there are over two dozen protagonists jockeying for sizable screen time. While past Marvel team-ups have been exemplary at allowing everyone a moment in the spotlight – the first Avengers film back in 2012 was particularly a thing of beauty when it came to significant time-shares – this one doesn’t fare nearly as well, with many favorites ultimately lost in the perpetual whirl of motion. This is the It’s a Mad, Mad, Mad, Mad World of Marvel movies, with Thanos subbing for Spencer Tracy. 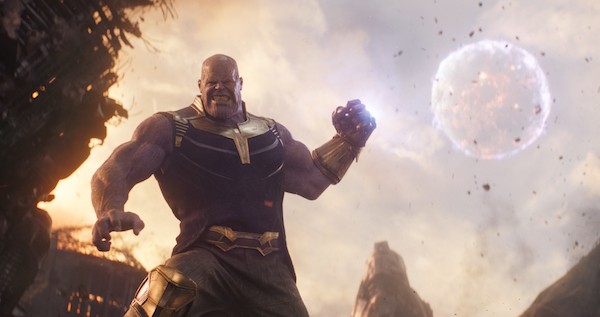 Much of the enjoyment comes in the cross-pollination occurring when these heroes split up for various missions. Thor finds himself palling around with Rocket (Bradley Cooper), and it never grows old hearing the God of Thunder refer to the raccoon as “rabbit.” Iron Man and Dr. Strange make for an antagonistic pair, with Spider-Man occasionally interrupting their bickering with amusing pop-culture references. The dollops of humor found in these interludes are a welcome respite from the heavy drama, alleviating the mood without ever breaking it. The same, however, can’t be said for the more strained and stretched bits of comedy, most of which — naturally enough — come courtesy of the Guardians (particularly Drax, again played by Dave Bautista). This brand of humor worked well within the confines of their own films but feels tonally jarring in this picture.

Overall, though, Avengers: Infinity War is rousing entertainment — it’s both thrilling and chilling, marked with pockets of genuine pathos. If some pacing issues (the visit to Peter Dinklage’s place of employment could easily have been truncated) and the occasional bloat prevent it from quite reaching the upper echelons of the MCU, there’s still more than enough here to keep viewers sated, saturated, and salivating over what’s certain to be a poignant and potent Part Deux.