The marvel that was 2012's The Avengers receives a letdown of a sequel in Avengers: Age of Ultron, the sort of hype-driven CGI extravaganza that will leave impressionable fanboy types feeling like they have just stared into the face of God while causing more discernible moviegoers to chalk this up as a mild disappointment as well as a blown opportunity.

Make no mistake: This new picture is worth seeing, what with the return of that formidable cast and isolated scenes as impressive as other choice bits seen in past Marvel Cinematic Universe adventures. But what writer-director Joss Whedon (sharing scripting duties with Zak Penn) accomplished with the first Avengers flick almost qualified as alchemy, and that sense of magic is largely missing from a follow-up that subscribes to the Bigger Is Better theory. The irony is that its predecessor was already Bigger and Better, with Whedon corralling a sizable flock of superheroes and allowing them all to shine as characters (Jeremy Renner's Clint Barton/Hawkeye arguably excepted) while also putting them through the paces in some extraordinary battle sequences.

That's the first shock that greets us in this new picture. After years of incoherent skirmishes in the various Transformers films, what a pleasure it was to watch The Avengers and realize that Whedon understood how to choreograph fights with a real sense of spatial dynamics and logical maneuverings, all with the invaluable assistance of superb special effects. The pre-credits melee that opens A: AoU, on the other hand, is a visual eyesore, a frenetic jumble further crippled by effects that never once look believable. It's an inexplicable reversal of expectations, and my only conclusion is that Whedon was out with the flu during the shooting and CGIing of this sequence, and some hapless grad school intern was grabbed on the fly to take the helm. Or maybe Brett Ratner was tapped to lend a hand, since this picture most resembles X-Men: The Last Stand in its desire to include everything that popped into its creators' heads, regardless of whether there was enough running time to adequately cover all material.

After this shaky start, we soon reach the meat of the story, which finds Tony Stark/Iron Man (Robert Downey Jr.), with the reluctant aid of Bruce Banner/Hulk (Mark Ruffalo), going the Dr. Frankenstein route and attempting to create life — in this case, an AI he hopes will serve as a global peacekeeper and thus allow the members of the Avengers to kick back and spend their time taking extended vacations, sipping martinis and binge-watching Daredevil on Netflix. But instead of a Gandhi/RoboCop hybrid, Stark ends up with Ultron, a maleficent being with the goal of wiping out the entire human race. Ultron is voiced by a purring James Spader, whose wisecracks — not as polished as his pop Tony's bon mots — often make him sound less like a megalomaniacal destroyer of worlds and more like a Borsch Belt comedian trying out new material. Ultron was a far more imposing villain on the pages of the comic book (side note: I was a subscriber to The Avengers — and The Uncanny X-Men and Justice League of America — throughout my teen years); on the 2015 cinema scene, he's merely a Bond baddie wannabe, not nearly as mysterious, interesting or potentially menacing as Alicia Vikander's AI Ava in Ex Machina. 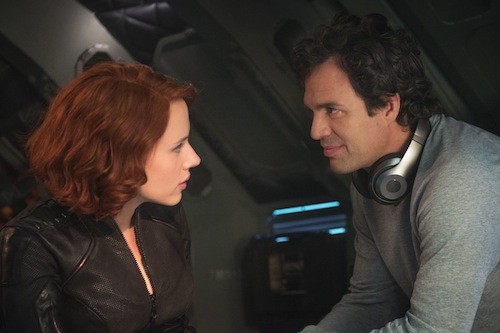 Along with Stark, Banner and Barton, the rest of the Avengers — Steve Rogers/Captain America (Chris Evans), Thor (Chris Hemsworth) and Natasha Romanoff/Black Widow (Scarlett Johansson) — are of course on hand to combat any and all threats, and as with the first film, the best moments are those in which the characters are allowed to relate to one another, whether in casual conversation, via jokey exchanges or through verbal assaults. These interludes allow for further tensions between Tony and Steve, unintentionally humorous asides from Thor, and even a budding romance between Bruce and Natasha. Tony still gets off some sharp zingers (as in describing a day as "Eugene O'Neill long"), and one irresistible bit finds each hero attempting to lift Thor's mighty Mjolnir, a gag that receives the perfect punchline later in the film.

This is all good stuff, but for Whedon — or, more likely, for studio bean counters — it's simply not enough. So cue the introduction of twins Wanda Maximoff/Scarlet Witch (Elizabeth Olsen) and Pietro Maximoff/Quicksilver (Aaron Taylor-Johnson), two kids (described as "He's fast and she's weird") who aren't always sure whether to align themselves with Ultron or with our team of do-gooders. Evan Peters was so wonderful as Quicksilver in last summer's X-Men: Days of Future Past that there was grousing from several quarters (including this one) that he wouldn't be playing the role in this picture, with the honors instead going to the one-note Johnson (Savages, Godzilla). After viewing A: AoU, it's now clear that this turned out not to be a loss: This Quicksilver is an absolute dullard with next to no personality, and the role is so vapid and colorless that anyone could have handled the assignment with no noticeable fallout, from Aaron Taylor-Johnson to Justin Bieber to Kevin James to Kim Jong-un. As the Scarlet Witch, Olsen has a little more to do and completes her assignment in satisfying style, though we'll have to wait for future installments to really gauge her effectiveness.

But wait! There's more! There's the introduction of yet one more superhero (nicely played by Paul Bettany) and one more supervillain (sneeringly played by Andy Serkis). There's a sizable appearance by Iron Man sidekick James Rhodes/War Machine (Don Cheadle). There's the expected drop-in by Nick Fury (Samuel L. Jackson), delivering his standard rallying speech like Henry V at the Battle of Agincourt. There are a few surprises that won't be spoiled here, from the usual end-credits coda to a wide mix of familiar faces (I will allow that the requisite Stan Lee cameo is a keeper). And there's also Stark's Iron Men, Ultron's minions, Stark's Hulkbuster, Loki's scepter, Natasha's nightmares, and presumably even a partridge in a pear tree. But most of all, there's overkill, with characters and subplots being woefully truncated and sloppily filmed battle sequences proving to be more irksome than exhilarating. It's all fine and dandy for the ADD set, but more careful planning would have been appreciated when it came to assembling this Avengers outing.