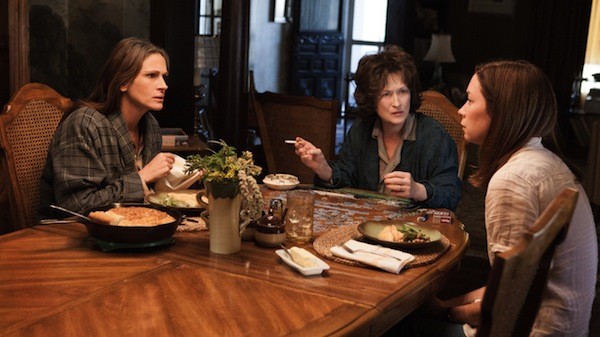 It would be correct to state that Meryl Streep is one of the great actresses of our (all?) time. But it would be incorrect to state that it's impossible to steal a film from her. And in August: Osage County, adapted from Tracy Letts' play (a Pulitzer and Tony Award winner), she's battling against plenty of top talent attempting to usurp her throne. In the end, one of them manages to pull off the coup.

As befits its stage origins, virtually all of the action occurs inside one residence: the Oklahoma home of poet Beverley Weston (Sam Shepard) and his wife Violet (Streep), whose steady supply of pills (to deal with her mouth cancer) has made her rude, combative and all-around unpleasant. When Beverley goes missing, it's suggested that he might have committed suicide, and over the course of several days, various family members show up to provide support. Beverley's brother (Chris Cooper) and his wife (Margo Martindale) are on the scene, as are the Westons' three daughters: Barbara (Julia Roberts), arriving with her estranged husband (Ewan McGregor) and their teenage daughter (Abigail Breslin) in tow; Ivy (Julianne Nicholson), secretly carrying on an affair with her stammering cousin (Benedict Cumberbatch); and Karen (Juliette Lewis), who brings along her skeevy fiancé (Dermot Mulroney). With so much bad blood and family secrets suddenly contained under one roof, it's no wonder the clan members are all at each other's throats, with the Westons' maid (Misty Upham) silently watching the proceedings from a safe distance.

A:OC doubtless works better in the theater, where its supposedly shocking twists are par for the course and where the restrictive mise-en-scène is expected (director John Wells does little to open this up for the screen). But as a formidable acting showcase, look no further. The British thespians (McGregor and Cumberbatch) fare the worst — not because of their performances (they're adept at playing Americans), but because their characters are the least developed. But it's a joy to watch the others delve into their meaty roles: Nicholson, who's criminally underused in major movies, is touching as the wallflower among the sisters, and I never tire of the folksy nature of either Shepard or Cooper (casting them as brothers was particularly inspired). As for Streep, she acts up her usual storm; it's a fiery, scenery-masticating turn, but it doesn't rank among her classics, and I won't be surprised if many dismiss it as too studied (as I did with her Oscar-winning work as The Iron Lady's Margaret Thatcher). No, the best performance in the film comes from Roberts, who hasn't been this good in over a decade — she's the real star of the movie, in screen time as well as character arc (it's absurd that she's being pushed — and accepted — in the Supporting Actress category). I expect both women will be nominated for Academy Awards, but it's telling that the BAFTAs (aka the British Oscars) recently nominated Roberts but not Streep. Our English friends across the pond are correct on this one: The queen is dead, long live the queen?