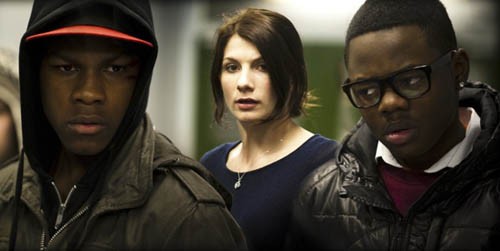 The new science fiction film Attack the Block opens with a gang of South London thugs mugging a woman (not physically harming her, but stealing her possessions) before having a run-in with a nasty critter from outer space. Those of us empathic to the plights of victims (and, I'm guessing, those still reeling from the recent London riots) will hope the malevolent e.t. will make mincemeat of these U.K. "yoofs" and are a bit disappointed when they kill the creature and assert themselves as the film's protagonists. It's easy to get behind the squeaky-clean kids saving the world in Super 8, but these junior criminals?

But sprint past those opening sequences and what emerges is a low-budget firecracker that's as adept at tackling social issues as it is at providing sci-fi thrills. With Hollywood fumbling its alien-invasion flicks at least three-quarters of the time (Cowboys & Aliens, the latest Transformers, and does anyone even remember Battle: Los Angeles?), it's nice to see that the rest of the global community can pick up some of the slack, with South Africa and New Zealand contributing District 9 and now the United Kingdom offering up this film. Like District 9, Attack the Block employs its fantastic tale to wrestle with issues of race and class structure — the sort of deep thought lost on Hollywood kingpins like Michael Bay, whose idea of sensitive racial exploration was to create two Amos 'n' Andy robots for the second Transformers flick.

After gang leader Moses (John Boyega) and his four friends take down the alien, they find that their neighborhood is suddenly the target of more of these marauding monsters (a cool design, they look like black furballs with glowing teeth). Sam (Jodie Whittaker), the victim of their mugging, initially tries to have them arrested but is soon forced to reluctantly team up with them to ward off the extraterrestrial intruders. But Sam's anger doesn't suddenly dissipate in the face of otherworldly evil, and the beauty of the movie is how she constantly reminds these street toughs that she's still pissed, that what they did was inexcusable, and that actions have consequences. As embodied by Whittaker, Sam is a wonderful female character: intelligent, tough, resourceful, and a far cry from Tinseltown's action bimbos du jour.

Yet Sam is just one of many memorable characters, as writer-director Joe Cornish creates a wide variety of distinct personalities. The five inner-city lads, invisible to the world, eventually make their presence known in a positive manner: They mature, they accept responsibility, and they're doing it in a fantasy flick that's perpetually exciting, amusing and out of this world.