The market manager is leaving to start a food innovation district 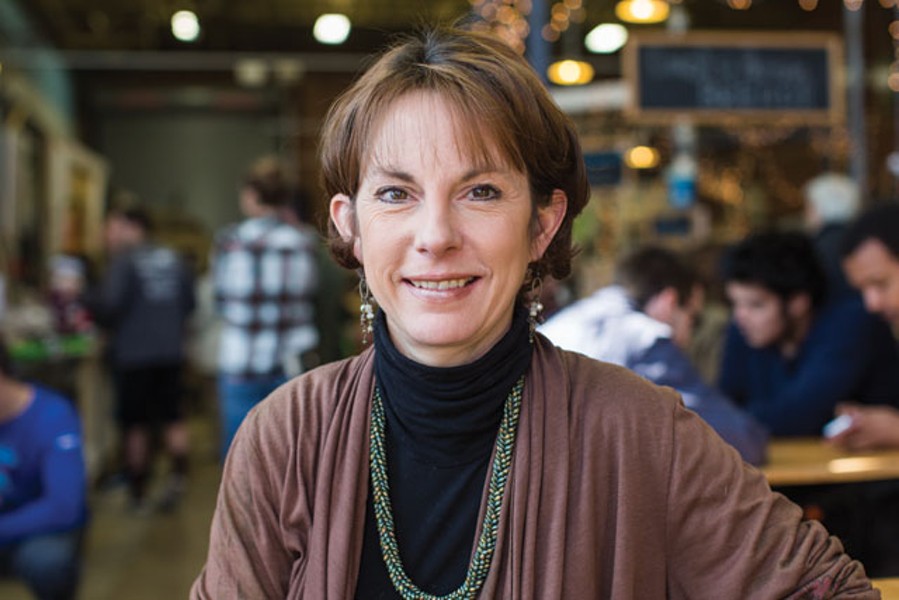 On the morning of March 3, Lynn Caldwell is calm and collected. She's hosting a group of schoolchildren at Atherton Market, the community market she has managed for the past five years. But I'm surprised to find her working; later that evening, she's taking the stage to make a case for the next step in local food for Charlotte.

Caldwell was a finalist in SEED20, a grant program led by Social Venture Partners that awards nonprofits, through a public pitching process, the funds to realize their vision. During the seven-week program, she worked with her peers, business mentors and coaches to shape and streamline her idea into an all-important three-minute pitch.

That night, the who's who of nearly every sector fills the Knight Theater auditorium. Caldwell and 10 others are vying for a chance to win one of five awards that total $55,000 in funds and resources.

Caldwell is one of the last to go. She walks out on stage and strides confidently up to the mic, a tiny force in a retro black dress and knee-high boots. Silence covers the audience. A sea of people eagerly wait for Caldwell to speak.

"We consume more than half a billion dollars in produce that isn't grown here," she begins.

Caldwell continues, in well-rehearsed theatrical fashion, to tell the crowd that if we had a food innovation district equipped with a food hub, a productive urban farm along with educational and business support, every dollar spent on local food would keep more than 70 cents in the local economy.

She closes with a big finish, voice projecting to the rafters, arms open wide. "Are you HUNGRY?"

Despite the roar of applause and a sound case, Caldwell was not selected for an award that night. No matter. Her eye is still on the prize. She will leave her position as the manager of Atherton Market at the end of April to pursue the next steps in developing a food innovation district with interested investors and a targeted location in North End.

IT'S SATURDAY MORNING in South End, a few weeks before the SEED20 competition. Shortly after opening its doors at 9 a.m., Atherton Market begins its busiest day of the week. Market-goers slowly trickle in while vendors ready their booths for business, hauling in fresh produce and arranging their displays for buyers. The market, like everyone else, is waiting for the coffee to kick in. By 10 o'clock, the place will reach full throttle — eager shoppers buzzing from booth to booth, disposable bags slung over their shoulders; young parents navigating strollers through the tight lattice of people; dogs barking to greet their fellow four-legged friends; and a community engaging with one another.

Among the crowd, you will see some of Charlotte's best chefs — Luca Annunziata (Passion8), Paul Verica (Heritage), Tim Groody (Fork!) and Clark Barlowe (Heirloom) — picking up their weekly haul from area farmers. Leaders of local food organizations catch up with their peers, visits that often equate to a market stay that extends into the noon hour.

Here is where the local food community finds its social center, and it's due largely in part to one woman. 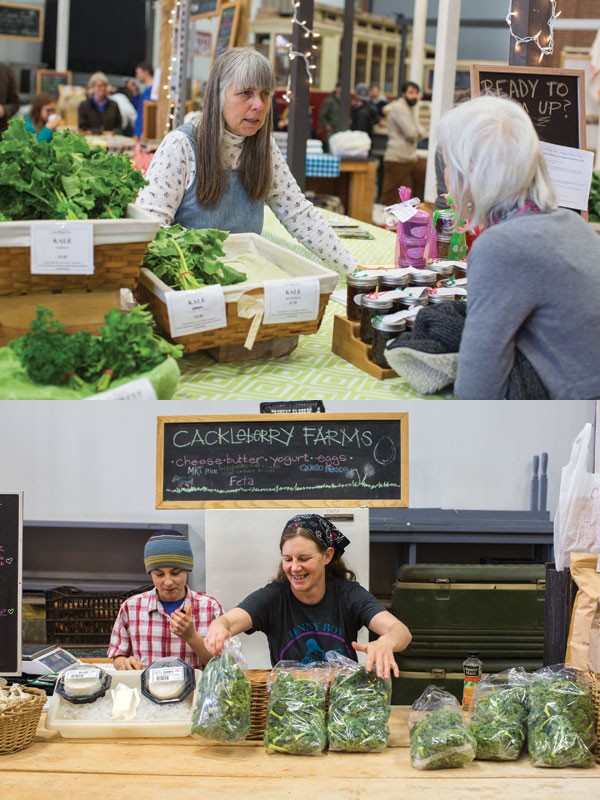 Caldwell, 48, weaves her way in and out of this weekly dance with aplomb. Her measured intensity is a striking contrast to the earth tones that she wears. Today, it's a light, airy cardigan and trademark cowboy boots, her hair neatly tucked behind her ears. She makes her rounds to vendors, stopping every few steps to pet a dog and say hello to familiar faces, some of whom she's known for years.

Almost immediately, as if someone's flipped a switch, Caldwell's brown eyes lock onto Duncan's, and she launches into a spirited update about the most recent conversation with her SEED20 coach, what tweaks she's made to her pitch and how she is working to articulate her goals to an audience.

To say she is immersed in this dream would be an understatement, but who wouldn't be jazzed about the culmination of an idea that began taking shape in 2006.

It all started in a parking lot, really.

When Caldwell moved back to Charlotte from Seattle in 1999, she realized something was missing. "In Seattle, there were [farmers] markets in every community," she says, "and when we moved back here, I couldn't find the equivalent."

A brief stint apprenticing on an urban farm in Plaza Midwood helped Caldwell realize she wasn't cut out to be a farmer: "I'm too much of a girl; there were too many bugs." But the experience left her with an immense respect for dedicated growers and a burgeoning desire to help them.

Inspired by a workshop she attended in Flat Rock with renowned market manager and author Nina Planck, who developed the Union Square Greenmarket in New York City, coupled with her longing for a fresh market in Charlotte proper, Caldwell decided to create something similar.

In June 2006, she launched the Charlotte Tailgate Farmers Market in Plaza Midwood with a handful of vendors, a few folding tables and a small community of individuals willing to help, including Chuck Barger, owner of the Common Market.

"At first, it was people selling produce out of boxes and I remember thinking, 'What is she doing and why is she doing it?'" Barger says. "But I was drawn to her because of her passion and vision, that she thought it was important for the community."

Mary Roberts of Windcrest Farms was one of the first vendors at the Tailgate Market. She's now a supplier at Atherton Market. "We literally had folding tables on the sidewalk," she says.

Caldwell grew that market and eventually moved it to South End, first on the patio at Common Market and then to the adjacent lot where Food Truck Fridays is held off Camden and Park roads.

For Caldwell, the Tailgate Market, which she managed from 2006 to 2009, was not a real economic generator; rather, it was a soapbox for local food saying, "This is really, really important." That caught the eye of the folks at retail developer Edens, who were interested in transforming a space in South End into a community market.

It took some convincing, but Caldwell eventually took the job as market manager, and Atherton Market opened with 15 vendors in May 2010. Today, 37 vendors populate the market, some seasonal and some permanent. (Pickleville Pickles, anyone?)

"WHAT I LOVE to do most," Caldwell says, "is connect people. There's a lot of power in that. Atherton Market happened through relationships and the power of building networks."

Among her qualifications, if you haven't already guessed, is the ability to make authentic connections. Caldwell frequently meets with people at market to share resources and connect them with others. On this particular Saturday, she sits with a young girl who recently created a nonprofit centered around providing access to local food for marginalized communities. Caldwell directs her to organizations she thinks might be of help.

These kinds of meetings are typical for Caldwell and have amounted to countless hours in conversation with farmers, food entrepreneurs, nonprofits and small businesses, affording her the unique perspective of seeing the need for something bigger.

"A food innovation district would take all the missing pieces of our food system and put them all in one place," says Caldwell.

According to a report written by Michigan State University, "a food innovation district is a geographic concentration of food oriented businesses, services and community activities that local governments support through planning and economic development initiatives to promote a positive environment, spur regional food system development and increase access to local food."

Michigan boasts a successful model in the Detroit Eastern Market, a 43-acre district featuring a public market with over 250 independent vendors, with merchants processing, wholesaling and retailing food. The district creates synergy among like-minded businesses providing a place to share resources and collaborate.

The closest thing to such a collaborative place in the Carolinas is Blue Ridge Ventures, an 11,000-square-foot shared used kitchen and manufacturing facility just west of Asheville. Blue Ridge Ventures provides educational resources and business support to farmers, food entrepreneurs and other food-oriented businesses to bring a product from idea to market.

But that is only one arm of Caldwell's big idea.

"When I began thinking about my next 'thing,' I couldn't decide if I wanted to do a food hub, a production kitchen or if I wanted to grow food in urban areas," she says. "Then I thought, why can't we do all of it?"

The Charlotte Food Innovation District, as Caldwell envisions it, would offer a space that would allow farmers to aggregate, distribute and market their products. This would help create scale for small to mid-size farmers and offer a better chance at working with institutions and restaurants interested in bringing local food into their establishments. Second, the district would house a culinary business incubator, similar to Blue Ridge Ventures, offering commercial kitchen space and business support for food entrepreneurs. Finally, Caldwell would incorporate an urban farming component where the community could participate in educational workshops for a more sustainable lifestyle.

Caldwell offers this as food for thought: A grocery store could only feed its regular customers for a total of three days if the trucks stopped delivering food to its back doors.

Jeff Rieves, a self-proclaimed "agri-preneur" and former extension agent for the Union County Agricultural Extension office, says local food is an effective economic driver, but the key to advancing a food culture is investment and infrastructure.

"In her efforts to build markets, she has brought a lot of visibility to local food culture," says Rieves. "But we need people willing to invest and we need more places to process local food. Lynn is making this viable in ways I haven't seen anyone else do."

What Charlotte does have are commercial kitchen facilities like Carolina Commercial Kitchen and The City Kitch, which support small food businesses by offering storage, equipment usage and other supportive services.

In Uptown, Packard Place has some similarities to what Caldwell envisions. The creative space is a hub for startups focused mostly on technology and the business sector. Companies like RevTech Labs offer mentorship and support for tech startups. Queen City Forward, also in the Church Street building, performs a similar service for social entrepreneurs with ideas that work for social and environmental good.

Caldwell was initially asked to sit on a panel for the conference but quickly became a participant and finalist for the challenge, ultimately taking home a second place prize of $3,000 and community support for her vision. The challenge was so energizing that Caldwell looked toward SEED20, a similar competition now in its fourth year.

In her pursuit to fulfill her vision, Caldwell has gained some attention, including that of a few serious investors who are on board to move the project along. A site has been identified for the Charlotte Food Innovation District, and though Caldwell does not have additional funds from SEED20, she has enough momentum to take action.

"It takes big ideas to drive changes," says Thom Duncan. "Lynn is an incredibly determined person who has always had her goal in front. She cares about the outcome, not about becoming somebody special. And that," he says, "is what makes her somebody special."

Caldwell says she never thought her idea was not possible. Her experiences developing community, interacting with people and forming relationships from shoddy parking lots to a fully operational indoor market open five days a week have readied her for bigger impact. She thinks Charlotte is ready, too.

Correction: This story has been updated from the print edition to clarify the services offered at Carolina Commercial Kitchen and The City Kitch offers.