As Charlotte institutions fell by the wayside in 2016, Open Kitchen remains... well, open 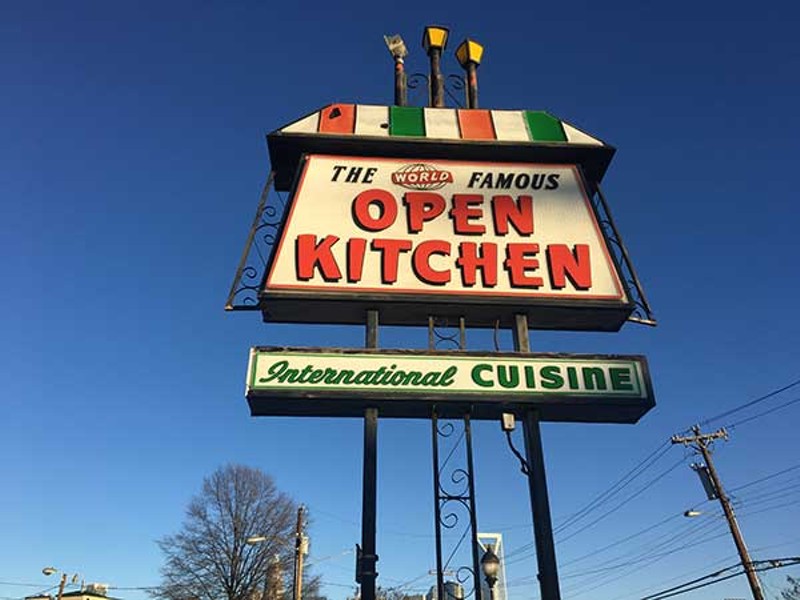 Longtime Charlotteans are in collective mourning over the closings of so many QC institutions. In the past year alone, the doors shut at Tommy's Pub in Plaza-Midwood, the Double Door Inn in Elizabeth and Amos' Southend will soon follow suit. But one modest establishment that predates all of them, and likely will outlive more recent hotspots, is Open Kitchen, a mostly Italian restaurant on Morehead Street just west of Bank of America Stadium.

Founded in 1952 by Greek brothers Steve and Speros Kokenes, Open Kitchen was the first restaurant in the Charlotte area to offer "exotic" fare like pizza and pasta. And through the highs and lows of the West Morehead corridor that runs between Wesley Heights and Bryant Park, the Kokenes brothers' unassuming eatery, with its Little Italy-style red-checkered tablecloths and old-school signage, has stood firm.

The threat of the kind of development that's pushed other longtime establishments out of their neighborhoods is not lost on Steve Kokenes' daughter Christina Skiouris, who was born around the time her dad opened the restaurant. But for now, she's not worried — and her son, Stephanos, says he can't imagine ever closing the doors of the family business. "I love this place," he says. "I grew up here."

CL recently sat down with Christina Skiouris at one of those red-checkered tables, surrounded by rich red brick walls filled with photos and other memorabilia, to suss out the magic behind Open Kitchen's longevity.

Creative Loafing: With the loss of so many major Charlotte mainstays — and even nearer-by places like beloved soul food restaurant The Coffee Cup a few years ago — how do you keep Open Kitchen. . . well, open?

Skiouris: I really don't know. It could happen here. It's not our land. But we've been here for 64 years and it's been the same for all that time. And the owners like us and we like them. They understand. . . [pauses and smiles]. I think. I'm speaking for them here, but I think they understand that we're a well-established place that people really love. It could go, though, and that would be very sad.

Being that we're not corporate – we're a family – there's nobody over our backs saying, "Your percentage of profits has to be this or that or it's not worth doing." Because through the years it hasn't always been worth doing. It's been up and down and up and down, but you just keep doing it because it's your life.

You were a baby when Open Kitchen was in its early prime. What are the changes you've seen, not just in the food, but in the clientele and general vibe?

The neighborhood has gone through peaks and valleys, but the clientele is pretty much the same. It's always been families, a lot of daytime business people from downtown, nighttime couples on dates. You have to remember, this was the first restaurant in the entire area to have Italian food, and that was a big deal in 1952. We still hear from people today who tell us, "I had my first pizza here."

It's hard to imagine Charlotte not having a variety of ethnic options, let alone not having Italian food. What inspired your father to take a gamble on "international foods," as they called it back in the '50s? 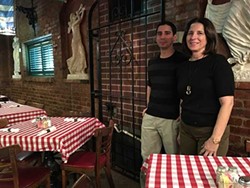 Well, my mother was from Washington, D.C., and when she and my father got married they moved to Washington. And then my uncle, Speris, 10 years later, wanted to open a restaurant and he wanted my father to be partners with him. It was after [World War II], and Italian had become a big thing in Washington. So my dad and my uncle went to all these Italian restaurants in Washington and ate. My father had that ability to just taste something and immediately go, "That's got this ingredient and that ingredient." So they came up with their own recipes and he moved back down here, and that's how it started.

How has the menu changed?

The Italian stuff is the same — the lasagna, the meat sauce, the marinara. We still have the same handwritten recipes that my father came up with. It's all the same. And that's a good thing. There used to be a lot more American and Southern-type food. But we don't do as much of that anymore. We still have a burger, a chicken sandwich, but that's about it. I mean, today our lunch special was country-style steak, but we hadn't had that in years. It was only because we wanted to eat it.

Is that how you choose your specials?

Pretty much. We'll say, "What do you feel like having?" And we wanted country-style steak today. But we've phased out most of the American stuff and added even more Italian.

When you were a kid, your father and uncle must have had you and your brothers working in here early on, no?

They used to make us come in and help put together pizza boxes. We learned how to do that as children. But I only started working here full time about 20 years ago. We had another restaurant, Gus's Original Forty Niner, out at UNCC. I worked out there from the time I was 18.

You mentioned that Open Kitchen was a dating hotspot back in the '50s car-culture era. Is it still?

Yeah, it still is — even more so since the neighborhood's coming back. The stadium brought the development back and it's just continued — the growth has exploded from here to Wilkinson. And that brings a lot of young people. A lot them come because their parents told them about how it was years ago; then they bring their children and that's how we keep it going. Newer people come in because of our history. People come here instead of going to a chain restaurant or something like that.

You have tons of sports pennants, political buttons, and photos on the walls of local luminaries and even national stars who've passed through — like Pat Boone, Charles Kuralt, Vincent Price, and the dude from WKRP in Cincinnati. What's the most notable celebrity you've had in here?

Buddy Hackett [a popular Borscht Belt comic from the '50s to the '70s] came in one time. He had friends or something who lived in Mount Holly. And when he came in, he went table to table, telling jokes and talking to people. And nobody bothered him after that. [Laughs] I guess that's the key if you're a celebrity: Come in, talk to everybody, sit down and have your dinner — and then no one will bother you.

Other than the fact that Open Kitchen has been in your family all your life, what keeps you going?

It's still exciting when people come in and say, "I've been in Charlotte for seven years and I just heard of you all and I came in and this is exactly the place I've been looking for." That makes you feel good. People come in here and you get to know them. It's like family. And our staff stays very steady — one has been here for over 20 years, and a couple more have been here 15 years. People like that. It's not some corporate, "Hi, I'm Tiffany, and I'll be your waitress" kind of place. And we don't have a hundred TVs in here. We have one. One TV. That's all.

Ever had an Italian chef?