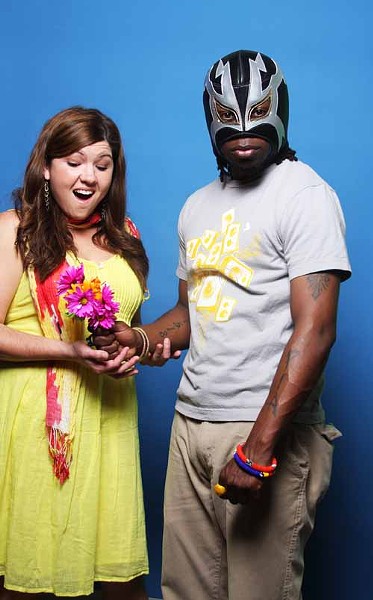 It seems like a planned happening. But it's totally a coincidence that the film Kick-Ass -- about a regular kid who tries to be a superhero despite the fact that he has no superhuman abilities or skills -- is hitting theaters at the same time that real-life superhero/teacher/artist de'Angelo Dia is hitting the streets of Charlotte once again.

Dia has been playing the role of El Negrito -- a name that he says, translated from Spanish, means the "charismatic or lucky man of color" -- for months. The character was spawned from a few things: an early love of comic books; a two-year stint teaching English in Mexico, where he discovered lucha libre-style masked wrestling; and a desire to do good works.

"The idea came from me wanting to do random acts of kindness," he says, "in the hopes that those acts of kindness would inspire other people. I delivered food to the homeless at the Urban Ministry, [organized] a canned food drive, I bagged groceries at a grocery store (I didn't work there or anything), and I promoted voter registration with my mask on."

"Wearing the mask," he adds, "if it did nothing else, it attracted people to at least look at me and see what I'm talking about."

Over the last few months, his alter ego has been on hiatus while he went to Florida to help with Haitian earthquake relief efforts (see photos from that project at The Mint Museum on March 30, 6 p.m.-8 p.m.) and as he prepared to work as a Summer Affiliate Artist-in-Residence at the McColl Center. Through a planned exhibit at the Center titled Black Face, White Mask, Dia says he'll use his super persona to address the themes of "blaxploitation in comics ... the complexity of being the 'token,' reflective of my many situations of being the only black ... what is a hero? ... via photography and performance art. With myself as the main character."

The artistic representations of him in El Negrito mode -- large vinyl images that have been displayed around town at venues like Dialect Gallery -- are his way of promoting heroic images of minorities, which are rarely seen in popular culture. "As opposed to looking for a black character that had some stability, I just figured I'd create my own."

The most surprising thing he discovered once he started his mission as a costumed do-gooder? He wasn't alone.

"There's another character actually running around Charlotte doing something similar named Guadalupe," says Dia (who actually registered with the World Superhero Registry). "And now that I put stuff online, I didn't realize the amount of people around the world fighting crime. It's definitely been interesting."

Keep up with this local hero's upcoming exploits and art at his Web site at Dia1518.com.

• ART: Fast food gets the royal treatment in Fried