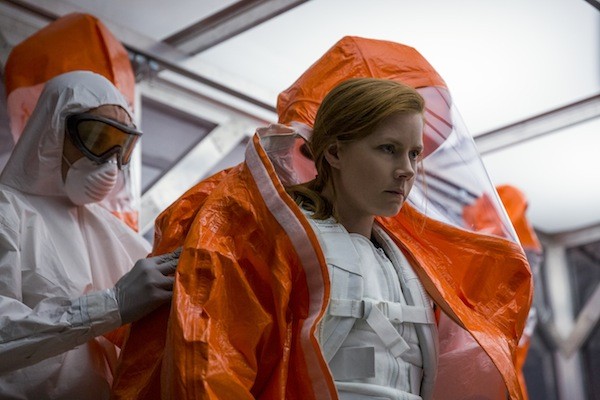 ARRIVAL (2016). The best picture of 2016, Arrival deservedly earned eight Oscar nominations, although its snubs in the categories of Best Original Score (for nitpicky reasons, it was deemed ineligible), Best Visual Effects (WTF) and particularly Best Actress (WTF!!) have been rightly criticized as Academy idiocy. A motion picture that turns out to be far more focused on humanity than on otherworldly visitors, it's a transcendent viewing experience that gets under the skin and into the heart. As a bonus, it's also the right movie at the right time: In a post-election world in which millions of gullible Americans have embraced transparent evil, ignorance and bigotry, here's a welcoming film that celebrates the best among us, those who gaze open-eyed at the horizon and invite the unknown rather than recoil from it (or, worse, seek to repel it with walls, weaponry or what-have-you). Presented in a fragmented manner that perpetually keeps viewers off balance, the film finds Amy Adams delivering a tremendous performance as a linguist tasked with communicating with extra-terrestrial visitors. Arrival is based on Ted Chiang's short piece "Story of Your Life," the type of work that sounds unfilmable. Yet scripter Eric Heisserer has contributed a screenplay that's both literate and lyrical, one that moves with grace and provides plenty of catharsis along the way. Director Denis Villeneuve never overplays his hand, and he requests the same from others working on this production. Arrival stirs memories of several heady sci-fi outings, among them Gravity, Interstellar, Contact and, of course, Close Encounters of the Third Kind — in many ways, though, it’s in a class by its beautiful self. 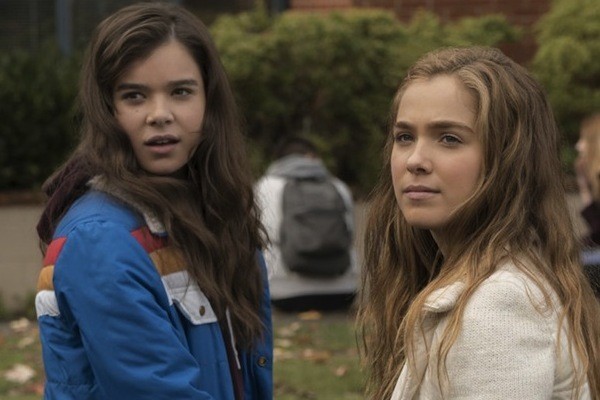 THE EDGE OF SEVENTEEN (2016). One of the 10 best films of 2016 (see the complete Best & Worst list here), The Edge of Seventeen fared distressingly poor at the box office, meaning its only potential salvation will be belated cult status from home viewers. It certainly deserves it: A sparkling gem that joins The Fault in Our Stars and An Education as one of the brightest coming-of-age films of recent vintage, this finds True Grit's Hailee Steinfeld delivering a powerhouse performance as Nadine, a high school outcast whose only friend is the lovely Krista (Haley Lu Richardson). Nadine also has a brother, Darian (Blake Jenner), who's described by everyone as perfect, leading to Nadine feeling even more insecure about herself (as one teen notes, they're like the movie Twins, with Darian as Schwarzenegger and Nadine as DeVito). When Krista and Darian unexpectedly begin dating, Nadine feels betrayed and spirals further out of control, with her frazzled mom (Kyra Sedgwick) and her sarcastic teacher (Woody Harrelson) only able to do so much to calm her down. The Edge of Seventeen marks Kelly Fremon Craig's debut as director and her sophomore session as screenwriter — based on the evidence here, she's clearly a welcome newcomer to the cinema scene, creating characters who feel painfully real and coaxing impressive turns from all the youngsters (Hayden Szeto is especially noteworthy as the nerdy Erwin). Of course, when it comes to veterans, it's always good to have Harrelson in your corner — as in The Hunger Games franchise, he's again a mischievous delight, taking advantage of the scattered scenes that Craig has gifted to him. He provides the humor, the teens provide the heart, and Craig provides a must-see movie.

Blu-ray extras consist of deleted scenes and a gag reel. 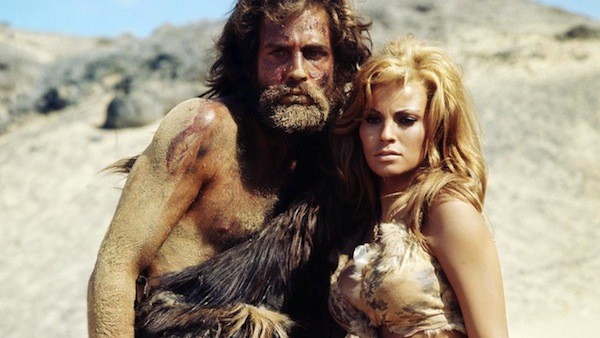 ONE MILLION YEARS B.C. (1966). It’s a shame the 1940 box office hit One Million B.C. has never been available on either DVD or Blu-ray, as the presence of Lon Chaney Jr. in its cast and Hal Roach (producer of the Our Gang shorts) behind the camera makes it worthy of home-entertainment enshrinement. On the other hand, it’s never been hard to track down its 1966 remake, which proved to be a commercial smash for Hammer Films and catapulted Raquel Welch to superstardom. The action is set among the Rock people, who are greedy, murderous, and slow-witted, and the Shell people, who are generous, friendly, and intelligent (in modern parlance, the Rock people are like conservatives while the Shell people are similar to liberals). Tumak (John Richardson) is a Rocker who’s banished from his tribe, and it’s only after he meets Loana (Welch) and the rest of the Shell people that he begins to behave decently. But encounters with Tumak’s brother (Percy Herbert) brings out the worst in everyone, and what about that volcano percolating in the background? Featuring dinosaur effects by Ray Harryhausen, One Million Years B.C. was highly influential in its day, with its success prompting Hammer to produce a few more prehistoric sagas (none nearly as successful) and its kitschy elements lending themselves to parody in later pictures (most notably the 1981 comedies Caveman and History of the World: Part I). The pin-up poster featuring Welch in a publicity shot from the film was one of the top-selling posters of its kind until the Farrah Fawcett one set a new record in the mid-70s.

Kino’s Blu-ray edition of One Million Years B.C. contains both the 100-minute international cut and the 91-minute U.S. cut. Extras consist of audio commentary by film historian Tim Lucas; separate interviews with Harryhausen, Welch and co-star Martine Beswick; an animated montage of posters and images; and the theatrical trailers.

THE SURVIVOR (1981). As a teen, I would devour the early novels of bestselling horror author James Herbert, whose output during the 1970s and ‘80s was every bit as prolific as that of Stephen King. The Rats, The Fog (no relation to the John Carpenter film) and The Spear were among the most memorable, but The Survivor was the first to actually make it to the screen (sadly, only four of his two dozen novels have thus far been turned into movies). Herbert called this Australian adaptation of his novel “terrible ... absolute rubbish,” and he’s not far off the mark. David Hemmings, the fine English actor (Blow-Up, Juggernaut, Gladiator) who sometimes dabbled behind the camera, serves as director for this unfortunate endeavor, and neither he nor scripter David Ambrose are able to inject anything approaching the requisite measure of mystery or suspense. Robert Powell (formerly the title figure in TV’s Jesus of Nazareth) plays Keller, a pilot who’s the only person to walk away from a airplane crash that kills 300 passengers and crew members. As the airline tries to figure out what caused the disaster, a woman with psychic abilities (a wasted Jenny Agutter) informs Keller that the crash victims are attempting to contact him. Joseph Cotton, whose credits include Citizen Kane, Shadow of a Doubt and The Third Man, appears briefly as a priest; sadly, this limp effort marked his final film appearance.

Blu-ray extras include a discussion of Herbert; an archival David Frost interview with Hemmings; and a trailer highlighting other films produced by Antony I. Ginnane, including 1976’s X-rated Fantasm (starring John Holmes), its 1977 sequel Fantasm Comes Again, and the 1978 horror yarn Patrick. The Blu-ray is also supposed to include vintage TV interviews with Hemmings and Powell, but clicking on the menu only brings up the aforementioned interview with Frost and Hemmings. 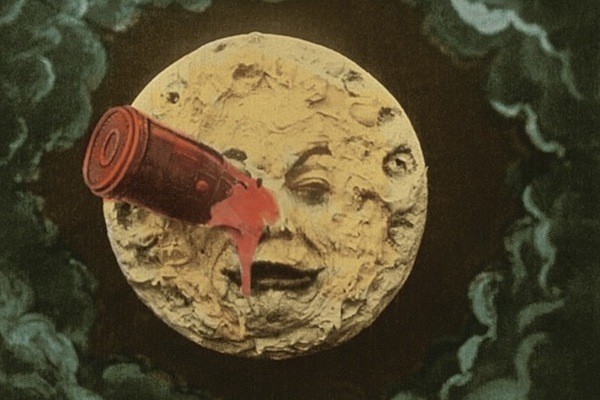 A TRIP TO THE MOON (1902). Anyone who marveled at Martin Scorsese's 2011 Oscar winner Hugo, which partly told the story of silent-film pioneer Georges Méliès (played in that picture by Ben Kingsley), got to see recreations of — and snatches from — the silent-film pioneer's most famous work, A Trip to the Moon. Now here's an opportunity to see the genuine article, unedited. Running a mere 15 minutes, A Trip to the Moon is a treat for cineastes and sci-fi fans alike, with Méliès borrowing from both Jules Verne and H.G. Wells to relate his tale about six dapper gentlemen who climb into their rocketship and head to the moon, where they encounter hostile creatures who explode in a burst of smoke when walloped. Méliès was the inventor of special effects, and he employs them liberally in this charming yarn, a true milestone in the history of cinema. (Netflix Streaming)

View from the Couch film review View From The Couch Blu-ray DVD Matt Brunson Arrival The Edge of Seventeen One Million Years B.C. The Survivor A Trip to the Moon