Anna Karenina: From Russia with love

The decision by director Joe Wright and screenwriter Tom Stoppard to add experimental artifice to their screen version of Leo Tolstoy's Anna Karenina will strike open-minded viewers as a harmless exercise in gilding the lily. Those less charitable, however, will see it as nothing short of a bloody disembowelment. 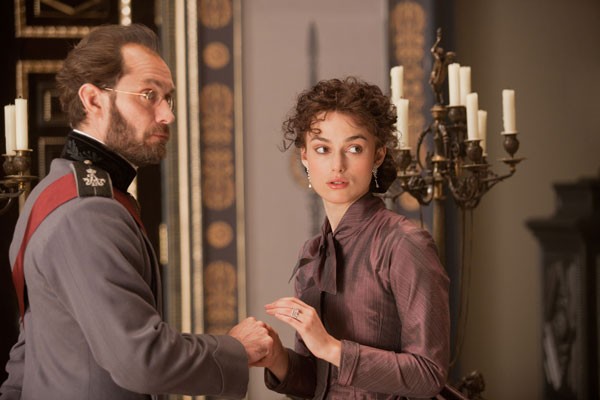 The truth actually rests somewhere in between. Tolstoy's literary classic hardly needs dressing up for the cinema — the frequent tag team of director Clarence Brown and star Greta Garbo proved that back in 1935 — yet Wright and Stoppard elected to have some fun with the source material, primarily by using a theater stage as the backdrop to much of the action. The device — a comment on the manner in which members of high society all have roles they're expected to play — isn't exactly subtle, but it does allow for some ingenuity: When a character decides to head to the countryside, a door is flung open and cinematographer Seamus McGarvey immediately presents us with an enrapturing, expansive outside.

Keira Knightley, who has teamed with Wright on Pride & Prejudice (earning a Best Actress Oscar nomination) and Atonement, delivers an impassioned performance as Anna, the 19th-century Russian belle who's married to the stuffy government official Karenin (Jude Law). Anna's brother Oblonsky (a spirited turn by Matthew Macfadyen) has been stepping out on his faithful spouse Dolly (Kelly Macdonald), a development that barely causes a ripple in this patriarchal society. But when Anna enters into a torrid affair with the dashing Count Vronsky (Aaron Taylor-Johnson), she finds herself ostracized by a hypocritically intolerant society.

The idea of an upper class as its own self-contained theatrical world hardly needs embellishment on the screen (Martin Scorsese's masterful The Age of Innocence is but one example of playing it straight), yet the fanciful notions instigated by Wright often engage the senses, whether through the use of miniature models (including those plot-central trains) or the choreography of the ballroom sequences (dancing couples remain frozen until Anna and Vronsky waltz by them). Unfortunately, Wright doesn't know when to give it a rest, and this frivolity becomes detrimental during the final act, when the tale's tragic developments should be allowed to flourish without any surface distractions.

Were Law a decade younger, he would have been the obvious choice to play the silky Count Vronsky and he would have been excellent in the role; instead, he's assigned the part of Karenin and does quite well. It's a credit to Law, Knightley and the entire supporting roster that their potency allows us to, if not accept, at least resign ourselves to the grotesque miscasting in the pivotal role of Vronsky. Taylor-Johnson, last seen as the beatific pot grower Ben in Oliver Stone's Savages, turns the irresistible and robust Count into a jejune milquetoast who's about as exciting as the narrator in an industrial film on cattle-prod manufacturing. A supercilious dandy, he's seemingly more enamored with his own silly mustache than with Anna.

Still, it would be unfair to, ahem, throw the whole movie under the train because of one casting error and a few ill-advised directorial choices. Anna Karenina may not be by the book, exactly, but it manages to emerge as a satisfying hybrid of stage and screen.