Angels in America was always going to be a watershed cultural event when it arrived in Charlotte in 1996. Tony Kushner's gay fantasia, seven hours long and presented on Broadway in two parts, had won the Pulitzer Prize and an unprecedented two Tony Awards for best play. Charlotte Repertory Theatre's production of Angels was by far the biggest in the company's history, setting attendance records that would never be broken.

Trouble was, an overblown religious crusade led by the Rev. Joe Chambers turned the arrival of Angels into a watershed political event of colossal, embarrassing proportions.

The lightning rods for local politicians — including the "Gang of Five" county commissioners and District Attorney Peter Gilchrist — were the curse words liberally sprinkled throughout the script and, incredibly enough, eight seconds of frontal nudity when protagonist Prior Walter is examined in a hospital. That brief nudity threatened to shut Angels down before it could open, while the objectionable language threatened the financial lifeline — and freedom of speech — of local cultural organizations for years to come.

The core of the religious right's argument was that Kushner's work was government-funded by the National Endowment for the Arts. Local right-wing politicians also were vexed that taxpayer money went to Charlotte Rep to produce such a controversial work. The whole embarrassing brouhaha went nuclear, blown up to national proportions in a memorable face-off on Good Morning America between Mayor Pat McCrory and Charlotte Rep managing director Keith Martin.

My 1996 cover story vividly described how daring the play would be, zeroing in on a scene in which Prior is romanced by Louis Ironson, who sinks his hand into the crotch of Prior's pants. The piece also revealed how far Charlotte Repertory Theatre had risen in the regional theater firmament. Rep was one of only six American companies granted the rights to produce parts of Kushner's epic. The story also explored the unprecedented size of the enterprise: the $215,000 budget, the 77-day contract with the actors, the banner advertising across College Street, the billboard on Tyvola. 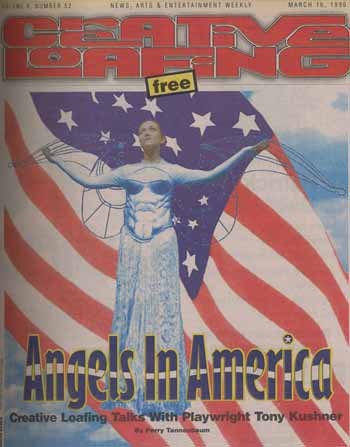 What I chiefly remember of the Angels in America controversy is that it marked a loss of innocence, both for myself as a local arts reporter and for Creative Loafing as a publication. I was alarmed that Charlotte Rep's managing director had embraced the strategy of launching a massive effort to educate the community and reassure everyone that there was nothing to be concerned about! I was even more alarmed when all this reassurance became front-page news in the Charlotte Observer, further sensationalizing the event. When the shit broke loose with the Rev. Chambers' Concerned Charlotteans, Mayor McCrory, DA Gilchrist, and the Performing Arts Center's Judith Allen, a smug little "I told you so" button clicked in my brain. To me, acting as if there was nothing to be concerned about would have worked far better than shouting it.

When CL reporter Vance Cariaga interviewed Chambers, the good reverend confirmed that his determination to protest the production was based strictly on its NEA funding. Otherwise, he said, he would have left it alone.

In retrospect, the controversy was the beginning of the end for the primary public combatants. Charlotte's "Gang of Five" was dissolved by a fed-up electorate and Charlotte Rep imploded after turning against Martin and company founder Steve Umberger – both of whom had staunchly refused to change a single word of Kushner's Angels in America script.