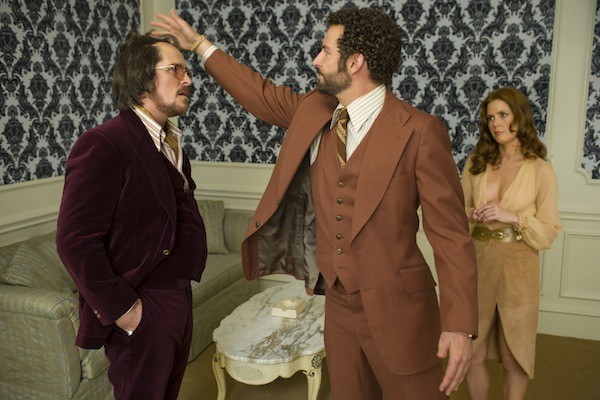 AMERICAN HUSTLE (2013). Second only to Inside Llewyn Davis as the best film of 2013, writer-director David O. Russell's American Hustle is a movie that in its best moments recalls Martin Scorsese's gangster classic GoodFellas, with a bit of P.T. Anderson's Boogie Nights thrown in to sweeten the pot. The film uses as its anchor the Abscam sting operation that took place in the late 1970s and early 1980s, when the FBI managed to nab several politicians on charges of bribery. The bureau employed a con man named Melvin Weinberg to assist in prepping the investigation, and that's where Christian Bale comes in. He plays Irving Rosenfeld, the fictionalized version of Weinberg. In a fantastic opening scene, we watch as Irving patiently and meticulously gets his comb-over (complete with fake puff of hair) just right, signaling that this will be a movie in which surface appearances count for a lot but can just as easily be wrecked (as happens to that comb-over). Irving works alone on his cons, but that changes after he meets and falls for Sydney Prosser (Amy Adams), whose classiness and sex appeal allow him to succeed like never before. But zealous FBI agent Richie DiMaso (Bradley Cooper) manages to bust Sydney, which enables him to blackmail the couple: Snag some bad guys for the agency and the lovebirds can walk away. It sounds like a sweet deal, but it grows increasingly complicated as it progresses, with Richie electing to go after bigger game, Irving worrying about his new friendship with a beloved Jersey mayor (Jeremy Renner) and Irving's unpredictable wife Rosalyn (Jennifer Lawrence) threatening to gum up the works. There's more — so much more — and it's all delivered by Russell and co-writer Eric Singer in scintillating fashion. The entire cast is superb — Bale's baleful glares at Richie and exasperated ones at Rosalyn suggest he might have had a place in silent cinema — although it's the ladies who take top honors. Adams, generally cast as sweet, soulful women, gets to be sexy, smart, duplicitous and even piteous, and she nails every facet of this fascinating character. As for Lawrence, she continues her big-screen conquest, building on her triumphs with a hysterical (in both senses of the word) turn as a blowsy wife who fancies herself the heroine of this sordid saga. This earned 10 Academy Award nominations, including Best Picture.

Blu-ray extras consist of a making-of featurette and deleted and extended scenes.

FROZEN (2013). Using Hans Christian Andersen's The Snow Queen as its loose source, this Disney delight dares to crinkle the studio's patented formula a tad by presenting audiences with not one but two female leads — neither of whom make it her main mission in life to snag a fellow. Instead, Frozen is ultimately a tale of sisterly love, as young Anna can't understand why she's forced to spend much of her childhood segregated from her older sibling Elsa. What she doesn't know is that Elsa can't touch anything without it frosting over — she's like a combination of X-Men sweethearts Rogue and Iceman — and the girls have been separated for what's believed to be in the best interests of both. But on the day that Elsa (now voiced by Idina Menzel) is declared queen, her powers inadvertently freeze the entire town, leading her to dash into the icelands while the villagers clamor for her head. But not Anna (Kristen Bell), who, with the encouragement of a dashing suitor named Hans (Santino Fontana), hightails it after her sister. This being a Disney toon, she naturally picks up some companions along the way, including the hulking outdoorsman Kristoff (Jonathan Groff), his reindeer sidekick Sven and the perpetually perky snowman Olaf (Josh Gad), who amusingly has it in his icy head that he would love the summer months. As is often the case with CGI cartoons, the backgrounds are rendered in more convincing detail than the human characters' expressions; here, the animation team kicks it up a notch, creating a wintry wonderland that's dazzling to behold. The romance is more complicated than in most Disney flicks, with Anna-Hans-Kristoff basically serving as the animated equivalent to Catniss-Peeta-Gale or Bella-Edward-Jacob. Sven and especially Olaf provide the requisite humor, while songwriters Robert Lopez (Avenue Q, The Book of Mormon) and his wife Kristen Anderson-Lopez provide some potent musical numbers. It's all in the service of a crowd-pleaser that iced last year's animated competition. This earned Oscars for Best Animated Feature and Best Original Song ("Let it Go").

Blu-ray extras include a making-of featurette; various music videos for "Let It Go" (including the official version by Demi Lovato and ones sung in Spanish and Italian); and the so-so, Oscar-nominated Mickey Mouse short Get a Horse! 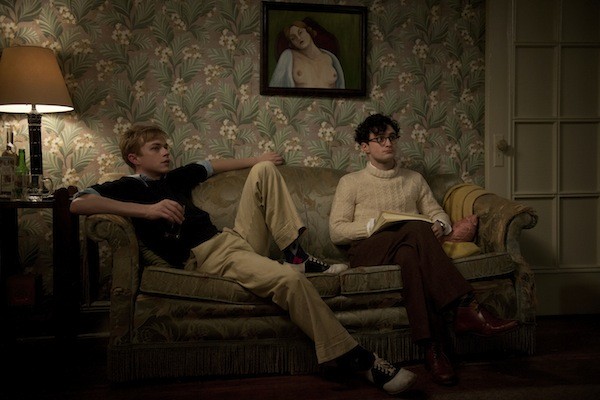 KILL YOUR DARLINGS (2013). The Beat goes on with Kill Your Darlings, which finds former Harry Potter star Daniel Radcliffe gripping a different sort of wand as he essays the role of American poet Allen Ginsberg. The latest in the recent string of films focusing on various members of the Beat Generation (following Howl, On the Road and Big Sur), this one's set in 1944, as a boyish Ginsberg arrives at Columbia University and immediately falls for the loquacious Lucien Carr (Dane DeHaan). Hanging out with fellow writers — and fellow rebels — Jack Kerouac (a robust Jack Huston) and William S. Burroughs (a drolly amusing Ben Foster), the pair forge ahead with their so-named "New Vision" literary movement; they encounter many distractions, though, especially the stalking of Carr by his mentor David Kammerer (Dexter's Michael C. Hall), an older man whose longtime infatuation with the lad eventually leads to a fatal stabbing. Writer-director John Krokidas and co-scripter Austin Bunn, former college roommates making their joint feature-film debut, have crafted an interesting if patchy film that at least fares better than the woeful On the Road in allowing these iconic figures to come alive on screen. Radcliffe fights hard to shed his wizard image and only partially succeeds, but there's nothing wrong with DeHaan's vibrant performance as the tortured Carr. Yet ultimately, the film is too mannered, too restrained, to really catch fire. Even with all these revolutionary writers at its center, it chooses to whisper when it should howl. 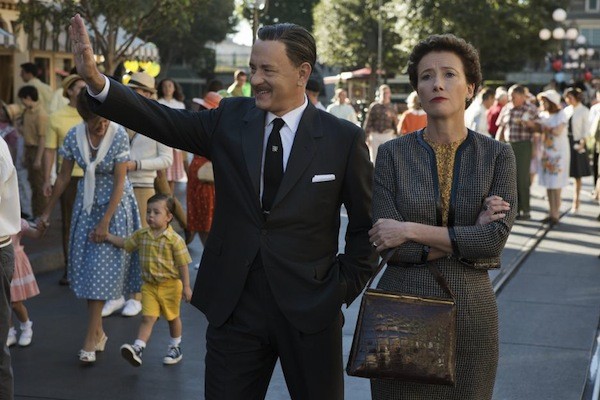 SAVING MR. BANKS (2013). The 1964 film version of author P.L. Travers' Mary Poppins finds the title character (played by Julie Andrews) describing herself as "practically perfect in every way." The most one can say about Saving Mr. Banks is that it's "practically pleasant in every way" — at least the sections that follow how, in 1961, Walt Disney (Tom Hanks) finally succeeded in his 20-year attempt to get Travers (Emma Thompson) to meet with him to discuss bringing Mary Poppins to the screen. Travers had long refused to allow her cherished character to become cheapened in a Hollywood production, but with her finances growing tight, she has little choice but to at least entertain the possibility of a motion picture adaptation. Yet as soon as she sets foot in Los Angeles, she becomes impossible, and Disney does everything in his power to please her. As history has proven, the film did get made, it was a huge critical and commercial success, and Disney and Travers allowed all their differences to melt away and lived happily ever after. Or so this movie would have one believe — in truth, Travers was so offended by the film and by Disney's treatment of her that she refused to ever do business with him again. Of course, this wouldn't be an apt ending for a cheery flick from — you guessed it — Walt Disney Pictures, so the sour notes are relegated to the distant past, in flashback sequences that show Travers as a young girl (Annie Rose Buckley) living in Australia with a loving but alcoholic father (Colin Farrell) and a weak-spirited mother (Ruth Wilson). These segments are meant to provide the psychological explanation for Travers' later actions, but it's facile material and takes time away from the more entertaining segments that find the author contending with all the California dreamin'. Thompson is fine as Travers, but the one-note nature of the part hardly makes it a stretch for the actress. And Hanks is suitably avuncular as everyone's Uncle Walt, though it's hard for him to disappear in the role of so familiar a person. After all, Disney was more camera-friendly than any studio mogul in history — and not just because he hosted over 300 episodes of The Wonderful World of Disney — and it's easier to believe Hanks saving Private Ryan than saving Mr. Banks.

Blu-ray extras include deleted scenes; a featurette examining the Walt Disney studio from the time of Mary Poppins to today; and a look at the cast and crew singing "Let's Go Fly a Kite."