American Animals, The Day of the Jackal, Exorcist II: The Heretic among new home entertainment titles | View from the Couch | Creative Loafing Charlotte

American Animals, The Day of the Jackal, Exorcist II: The Heretic among new home entertainment titles 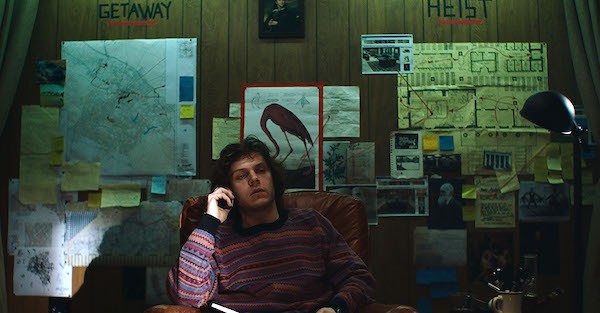 AMERICAN ANIMALS (2018). There are many reasons why Clint Eastwood’s The 15:17 to Paris remains one of the worst films to be released thus far this year, but chief among them is that the decision to cast the real-life heroes as themselves backfired spectacularly, since all three proved to be wretched actors. Writer-director Bart Layton’s American Animals occasionally includes sequences featuring the actual folks who took part in the real-life heist documented in this movie, and the takeaway is that these young men are natural enough in front of the camera that they might actually have pulled off what Clint’s crew couldn’t. Nevertheless, they wouldn’t have been better than the actors playing them for the vast majority of the film – specifically, Even Peters (the good Quicksilver from the X-Men flicks, not the lame Quicksilver from that Avengers romp), The Killing of a Sacred Deer’s Barry Keoghan, Blake Jenner and Jared Abrahamson. All four are spot-on in this inventively staged drama (with ample comedic undertones) about four young men who plot to steal several rare books (including texts by John James Audubon and Charles Darwin) from Transylvania College in Lexington, Kentucky. Like the serial killer yarn Beast, another recent Blu-ray release from Lionsgate, here’s a movie that takes a tattered genre and manages to add some fresh elements to it. Incidentally, the film was largely shot here in Charlotte (look for our skyline pretending to be the Lexington skyline), while the college sequences were filmed at Davidson College.

Blu-ray extras include audio commentary by Layton and cast; a deleted scene; and a still gallery. 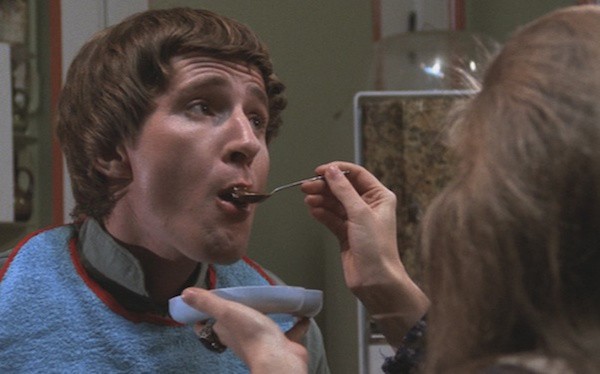 THE BABY (1972). Even by the standards of early-‘70s cinema, The Baby is one odd puppy. Yet contrary to popular belief, the movie is neither a full-on horror film nor a sexploitation romp (both suggested by the original poster back in the day) — instead, it’s actually a psychological drama about disturbed individuals, only turning into anything resembling a gory thriller during the home stretch. The titular infant is actually 21 years old — known only as “Baby” (played by David Mooney, here billed as David Manzy), he’s been kept in diapers his entire life by his domineering mother (Ruth Roman) and two sisters (Marianna Hill and Suzanne Zenor), all of whom have also prevented him from learning how to speak, walk, or anything else that would allow him to function on his own. The last social worker who worked on his case has mysteriously disappeared, so enter Ann Gentry (Anjanette Comer), who takes an immediate liking to Baby and will do anything to liberate him from the clutches of his deranged family. A terrific twist ending is what puts this one over the top. Cineastes will recognize Roman as the female lead in Hitchcock’s Strangers on a Train; here, she’s fine in the sort of late-career role generally essayed during this period by the likes of Bette Davis and Joan Crawford.

THE BRIDE (1985). The Bride might be inspired by Mary Shelley, but its nature instead seems to draw from Robert Louis Stevenson. Aping the latter’s Dr. Jekyll and Mr. Hyde, this feels like two separate movies battling for the upper hand, with the end result basically being a tie. On one hand, there’s the tale of Baron Charles Frankenstein (Sting), who has created a beautiful bride, Eva (Jennifer Beals), for his misshapen monster (Clancy Brown) and, after he believes the creature to be dead, elects to mold Eva into an intelligent and independent woman. This half of the movie botches an intriguing idea, and it’s further crippled by lackluster performances. While Sting is too sleepy for his role, he at least conveys the appropriate amount of arrogance – unfortunately, Beals is woefully miscast in the pivotal role, while Cary Elwes is a drag as the soldier who comes between the Baron and the bride. On the other hand, there’s the story of what happens to the monster after he escapes from the Baron’s clutches. This half of the film focuses on the relationship between the gentle giant and his diminutive new friend Rinaldo (David Rappaport), and it tracks their exploits as they decide to join a traveling circus. These interludes are genuinely moving and heartwarming, further bolstered by excellent turns by Rappaport and especially Brown. Look for Mike Leigh regular Timothy Spall in what’s basically this film’s equivalent of the traditional Igor role.

Blu-ray extras include audio commentary by director Franc Roddam and new interviews with Roddam and Brown.

THE DAY OF THE JACKAL (1973). Author Frederick Forsyth struck gold right out of the gate with his first fictional work, the 1971 international bestseller The Day of the Jackal, and then had the good fortune to watch it transformed into a motion picture that (unlike too many page-to-screen efforts) steadfastly avoided botching the source material. A largely faithful adaptation of Forsyth’s novel, this absorbing thriller starts with a real-life focal point — the repeated attempts of the right-wing terrorist organization OAS to assassinate French president Charles de Gaulle after he granted independence to Algeria — and then spins off a harrowing tale of the OAS hiring an outsider to pull off the murder. Their choice is an English assassin known only as The Jackal (Edward Fox), and the film pivots between detailing his preparations for the hit and following French and British government officials as they try to ascertain his identity before it’s too late. Fox is perfectly cast as the ice-cold killer, and he’s beautifully matched by the great Michael Lonsdale (best known stateside as the villainous Drax in the Bond outing Moonraker) as the disheveled French detective who’s perpetually attempting to guess the hit man’s next move. Director Fred Zinnemann, scripter Kenneth Ross, and editor Ralph Kemplen (earning this film’s sole Oscar nomination) all deserve high marks for ratcheting up the tension in a movie whose outcome is never in doubt (after all, de Gaulle died years later at home, at the age of 79).

Blu-ray extras include vintage behind-the-scenes footage; an archival set interview with Zinnemann; an interview with author Neil Sinyard (Fred Zinnemann: Films of Character and Conscience); and the theatrical trailer.

EXORCIST II: THE HERETIC (1977). This sequel to the 1973 smash The Exorcist is a movie that continues to live in infamy. Director John Boorman, whose filmography includes such superb efforts as Deliverance and Excalibur, loses his way on this ghastly endeavor, hindered in no small part by a script from William Goodhart that, in the writer’s partial defense, was heavily rewritten even after production was underway. Linda Blair returns from the classic original, as her character of Regan MacNeil has seemingly suppressed all memories of her demonic possession and subsequent exorcism. But the devil is still in the details, meaning that it’s up to a doubting priest (Richard Burton) and a concerned psychiatrist (Louise Fletcher) to save their teenage charge. Exorcist II: The Heretic is a perfect mix of tedium and hilarity, and it’s easy to understand why audiences back in the day actually threw items at the screen (you’ll doubtless fight similar urges). The risible bits include any sequence involving the mind-melding “synchronizer,” the National Geographic interludes featuring locusts (and look for James Earl Jones as a medicine man who sports a giant locust ornament on his head), Regan’s locust dance, Burton’s atypically awful performance, and — my fave — the sight of “good” Regan huddled against a wall as the “bad” Regan grapples with Burton’s priest on a violently shaking bed as the house collapses around them. Father, forgive them.

The new Shout! Factory Blu-ray edition of Exorcist II: The Heretic contains two cuts: the original theatrical version at 117 minutes (pulled days after release and shortened by Boorman) and a 102-minute version (note that a major character survives in one version and dies in the other!). Extras include audio commentary by Boorman; a new interview with Blair; trailers; and a still gallery. 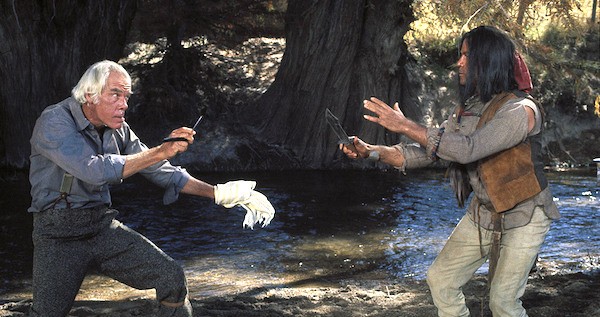 THE GREAT SCOUT AND CATHOUSE THURSDAY (1976). Little Matthew Brunson first saw The Great Scout and Cathouse Thursday at the age of 13 — it premiered in Portugal, where I was living at the time, two full years after its U.S. theatrical bow (there, it was called Turmoil in the Wild West). Coupled with her role in the TV miniseries Rich Man, Poor Man (which appeared around the same time), the picture led to my teenage crush on Kay Lenz; it also featured British actor Oliver Reed as a Harvard-educated Native American with a master plan to spread the clap among the white man, the sort of casting-and-character-combo one doesn't forget over the ensuing decades. Finally revisiting the film after a handful of viewings during my teens, I can't say that the picture is a success, but fans of bawdy comedies will appreciate at least some of its choices. Lee Marvin hams it up as the great scout of the title, seeking revenge on the slimy politician (Robert Culp) who betrayed him years earlier; Lenz sweetly plays Thursday, a teen prostitute who falls for Marvin's grizzled old coot; and Strother Martin portrays another in his long line of unkempt eccentrics, here handed most of the script's insults — for instance, when informed that a presidential candidate plans to give women the right to vote, he snorts, "He might as well give them the right to pee standing up; they still won't know what to do with it.” (Yup, this character is clearly a forefather to today’s misogynistic Republican Congress and White House.)

The only Blu-ray extras are theatrical trailers for other Kino titles. 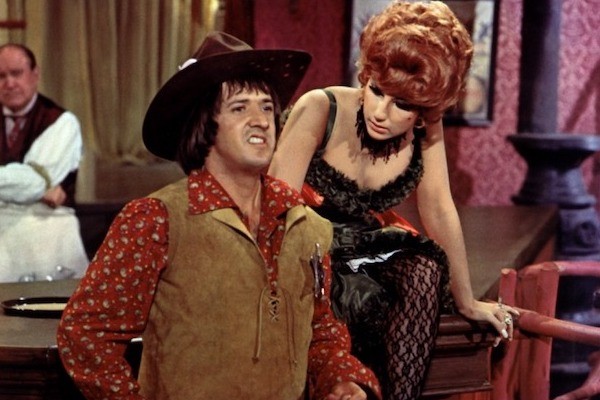 GOOD TIMES (1967). William Friedkin (The Exorcist, The French Connection) made his feature directorial debut with this simplistic comedy that also marked the big-screen debuts of Sonny Bono and Cher. While billed as a Sonny & Cher affair, the movie actually feels like a vanity piece for Sonny, with Cher largely looking bored in the background until she’s asked to come forward to sing a few tunes. As for Sonny’s acting talents, let’s just say he makes Ringo Starr look like Daniel Day-Lewis by comparison. The plot centers on the duo’s efforts to make a movie being produced by an unscrupulous businessman (George Sanders). While trying to come up with a plot, Sonny imagines himself cast as a cowboy, a private eye, and Tarzan. Hilarity doesn’t exactly ensue, but this disposable tissue nevertheless has its moments. 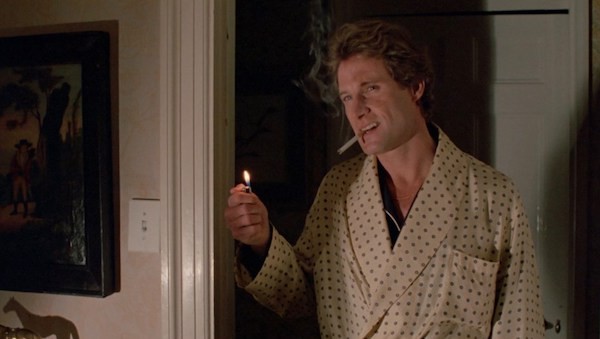 SCREAM FOR HELP (1984). Michael Winner helmed a few nifty flicks in the 1970s (Death Wish, The Sentinel) before suffering a career fallout in the 80s. Stuck in between the latter likes of The Wicked Lady and Death Wish 3 is Scream for Help, a film so forgotten by time that it made the jump from VHS in the mid-80s to Blu-ray in 2018, with no DVD stop in between. Its anonymity is understandable, since it’s absolutely awful – albeit in that drink-a-beer-every-time-someone-does-something-stupid kind of way. A teenage girl (Rachael Kelly) is convinced that her stepdad (David Brooks) is planning to murder her mom (Marie Masters), but she can’t convince anyone except maybe the horndog teenage boy (Corey Parker) who hangs around her. Awful acting, stillborn direction, inane dialogue, inert pacing — it’s a buffet of badness.

Blu-ray extras include new interviews with Brooks and screenwriter Tom Holland, and the theatrical trailer.

View from the Couch film review View From The Couch Blu-ray DVD Matt Brunson American Animals The Baby The Bride The Day of the Jackal Exorcist II: The Heretic The Great Scout and Cathouse Thursday Good Times Scream for Help