Alvin Jacobs, Jr., Documents the Problems and the Progress

Sitting with Alvin C. Jacobs, Jr., outside of Smelly Cat Coffeehouse in NoDa on a warm October morning, it's easy to see how just a handful of years ago his focus was on fashion.

He's dressed head to toe in denim, and is one of the few guys who can pull that look off while making it appear both flawless and effortless. When I ask if I can snap a few pics while he talks, all it takes is an instinctive tug at his collar and a pull at his sleeve and he's camera ready.

As we talk, though, it becomes clear that this "image activist" is now concerned with anything but his own image. Over the last five years, Jacobs' work has put things into perspective for him, as he's traveled across the country documenting the fight against police brutality and other social justice issues, shooting gripping photographs from New York City to Ferguson to New Orleans.

"There are some people behind this that you don't always hear about, because they're not all up in the videos, dancing," he says, grinning as he sees I've picked up on his Suge Knight, '95 Source Awards reference. "I became an individual that rose to prominence because of the work."

Jacobs talks to me about what got him started in the work, and what it was like when the Charlotte Uprising brought his work home.

Creative Loafing: You moved to Charlotte in 2012. What brought you here?

Has it lived up to that reputation?

I understand who they asked, whose opinion was respected, and I see that relationship play out every day here in Charlotte. If you're already of means, there's nothing that you can't do here. I'm quite sure that they didn't ask anyone who was marginalized or disenfranchised; they asked individuals who already had everything figured out. And to me, that's an important component to our community, there's some pieces missing.

I don't have it all figured out. There are still some rungs on the ladder. So my experience in Charlotte is different. It's not disheartening, it's not the worst situation in the world ... and as far as Charlotte ... I'm really glad I'm here.

When did you become socially conscious to the point where you wanted to basically commit your life to documenting the struggle for social justice?

So around then, I just started paying attention to what was really going on. And I don't want to say it's been downhill ever since, but you can't close your eyes anymore. I started reading more, I started researching more, I started responding differently to my environment. Now, more importantly than ever, with the information that has been made available, it's up to me to do something about what I know now.

I can ignore it. I can say it has nothing to do with me. I can pretend I don't see it, but it's there. And now that I've been made privy to some of the solutions, it's like a lever I don't want to turn off. It feels like you're doing yourself a favor by not paying attention, but you're really doing your community a disservice. And that's your responsibility now.

How has that affected your life?

In activism, you're constantly dealing with what's wrong. You can do everything in your power to realize solutions, but you realize you don't have that power, so you become cynical, and it's frustrating. You're garnered with all this information all the time, and you're looked upon as the individual that can change it, that can fix it, or at the very least, bring attention to it.

Well, there's no off time with that, it's always on. The first thing you do when you wake up in the morning, you're looking at news and you're just taking all this information in to see how you're going to respond throughout the day. I just realized that this morning, like, I've got to start doing something different.

When did you start to become passionate about photography?

It's been about seven years. It started out as a means of expression. There were a lot of circles I was in where photography made sense.

I wanted that, I needed that. I wanted to have something to offer to the community. Not just some idea, not just a thought.

So it was purposeful for you to get into photography to help your community?

Well, wanting that wasn't the thing in the beginning, because I didn't know what I was doing for a while. I had the equipment, I had the opportunity to learn, but I didn't quite have the understanding of the analysis — critical or otherwise — that enabled me to be in the right place at the right time. But I was already in the right place at the right time. So I stopped my concentration in fashion and editorial and commercial, and really just started getting out in the world, getting out in the streets, and it changed my entire perspective of the world, even in my little bitty community, and it clicked.

To this day I haven't sold any images I took, because it wasn't about making a living from it, it was about showing up in history. And that has been pushing me throughout. That's where the integrity comes in, because I'm not orchestrating the images, I'm not telling people what to do. I'm documenting, reflecting what's taking place in front of me.

So you're not a working photojournalist in a sense that you take pictures to get paid?

I thought I was a photojournalist until I was asked, "Well, have you ever been on assignment?" And I was like, "No." They said, "If you've done this on your own accord, you've just decided that this is what you want to do, that's not even that, you're a documentarian." I'm like, "OK, wow." Or they've called me an image activist? OK, sure, let's do it.

Is that the reason that you created the To Speak No Evil website?

When I was in Ferguson, I didn't want to just deliver photos. I didn't want to just put them out there, and no one knew who they were. If I worked for AP, or Washington Post, then that would be the channel or the platform, but I didn't have that. So I'm like, "You know what, I need a brand." It's just an independent photojournalism site with some opinion.

I didn't think it was going to do anything, it was more of a passion project. Let me show up in a way that's consistent, instead of it being all over the place. Now, if you want to find out what's going on, you can go to the website.

You were in Washington, D.C., when Keith Lamont Scott was killed. What was it like coming home to the Charlotte Uprising?

There was an increased responsibility and anxiety, because I knew what was going to take place. Not the magnitude of it, but the individuals that were going to be plugged in were going to be friends of mine, community members that I had relationships with. 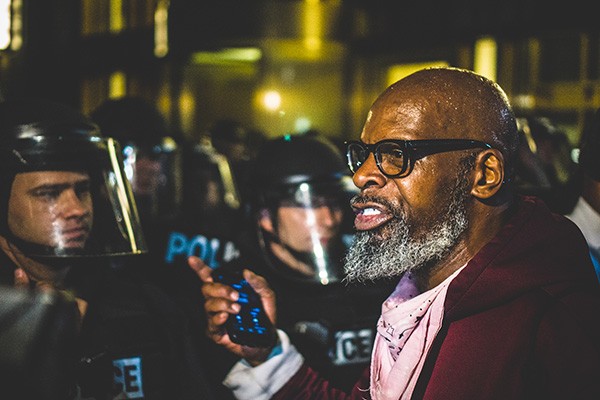 I knew how that narrative changes. I saw Ferguson happen right in front of me. And I knew Charlotte's [activism] infrastructure wasn't anywhere near as strong as Ferguson, because there just had been no foundation of protest here, not in our generation.

Charlotte has always had some things going, but they never really rose to prominence or fruition because Charlotte has a way of insulating itself from the world. But I knew it was going to be something, because the Jonathan Ferrell situation didn't really get a chance to grow. It was quelled early on.

This hit so hard, so fast and spread so quickly, it was all over the place before people even knew what was going on. I think that law enforcement and political leaders and even community leaders and activists kind of discounted what was going to happen. But the rage had built up, the frustration had built up, the anger. And it was just in so many different pockets of the city. I've seen what happens when people aren't equipped and they aren't prepared. And they do want a voice, but some people's voices aren't being heard. The narrative is, "Well, we hear you. We know you just want to be heard." And it's like, "No, we really just want to be alive. Stop killing us." That's what we want. Stop killing us. We can talk until we're blue in the face, but we want you to stop killing us. That's our ask. That's our demand. Those are our requirements.

I didn't see one person with a sign or one person that had grave concerns about affordable housing during the Uprising. No one was really talking about jobs right then. They were saying "Don't kill us. Stop killing us. Stop killing us." But the city responds, "Hey, we've got affordable housing." Well, not really, we've got income-based housing. Or, "We've got a couple jobs." That's great and that's amazing and that should've already been in place in a city this size, but also, stop killing us. That's what we're asking. That's what we're demanding, and that's yet to be addressed.

Speaking of which, the September shooting death of Ruben Galindo has stirred some controversy after the body cam footage was released last week, although there hasn't been as much of a community response from the activist scene as with other incidents. Why is that?

I've been on the outside looking in, because I just got back into town late last night. I look at who's responsible for activism here in Charlotte. There's only a few people. The circle is very, very small, and there's only a couple people who can galvanize the community.

Obviously, those key people are doing the work. Respect that work. If you're not going to respect that work, stop calling upon them. Let them go about their lives, and do what they need to do to be whole. There are some people who have been out of town, there's been some people who haven't been around, just because there's other things happening. So where's the work? Now is the time to stand up for everyone who has said that they were doing the work before.