Now, I believe that rising to meet the challenge of this climate crisis, with all of the transformations it will involve -- shifting to renewable fuels, integrating conservation and efficiency in every part of our lives, redesigning and rearchitecting the patterns of our cities and communities and lifestyles -- it seems impossible now. But it will also be energizing. It will lead to benefits that we don't yet see so clearly. And in the process, we will also, again, gain moral authority. And the ability to see other crises that are mislabeled as political problems, but actually also represent moral imperatives. The HIV/AIDS crisis, 20 million orphans in Africa alone. Child soldiers in intractable civil wars. Genocide in Darfur. Famine and starvation and tens of millions dying of these easily preventable diseases. Grinding poverty for billions. We are in a moment of potential global awakening, where global civilization is connecting in a new way, with the Internet and your generation perceiving itself so clearly to be part of a global generation, that the time is ripe for a new consciousness of how we can actually take these things in hand and solve them. There's a moral imperative to do it. And just as with the Marshall Plan, the benefits of doing so completely outweigh the near-term inconveniences and expense of taking it on. In retrospect, many years from now, it'll seem pretty obvious.

The biggest question to me is how to sell this to industry. To the Milton Friedmans of the world, corporate trustees who take environmental considerations into account are breaching their duty to maximize profits and ought to be fired. How do you convince corporations to earn less profit for the good of the planet? 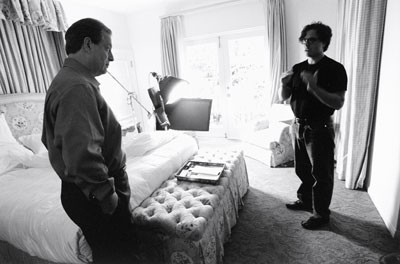 The way we define profits is itself deeply flawed. The convenient use of the label "externalities" has masked and concealed this massive oversight. It has a history. It has a specific birthday. In the 1930s, between the two wars, Lord Keynes created the so-called National Accounts. Out of that came GDP, and out of that came the standard techniques for business accounting. He created this accounting system during the tail end of the colonial era. And mainly because of that, natural resources were seen as essentially limitless, and therefore a free good that didn't have to be [accounted for]. You had to account for the labor used in extracting it, the capital used to go and get it, but if you ran out -- you wouldn't run out, because you'd just go conquer another little country somewhere, and exploit it. As a result, he came up with very rigorous rules for keeping track of all the capital, slightly less rigorous rules for accounting for the labor. But natural resources were handled in a very sloppy way. Depreciation, for example, doesn't apply.

So if you're a third world country, and you have a million acres of rainforest, rich in biodiversity, and you decide to cut down every last tree and bush in one year, on your accounting system, that will come up as a huge positive. Congratulations. Nowhere will it show you that you've just completely destroyed your future. Writ large, that same flaw has led to what some people say is the case: We're operating planet Earth as if it's a business in liquidation. Because we're liquidating the ecological system.

Everything must go -- and everything is going! But actually, if you look beyond the filter of the accounting system, and see the reality behind it, there are countless examples of businesses that have suddenly fallen off a cliff and been completely mystified by what happened, because they've been failing to take these factors into account, just in terms of their own business. And where the larger common good is concerned, of course, we have the result that we're now seeing. So there is a movement to change the accounting system. And Generation [X], incidentally, is very successful because it retrofits into the traditional accounting and measurement system a new way of taking that into account.

Abraham Maslow, the great psychologist of value, once said that if the only tool you have is a hammer, every problem looks like a nail. In the same way, if the only tool we use for measuring value is a price tag, then the things that don't come with price tags attached begin to look like they have no value. And yet they do. Businesses are getting wise to this. Investors are getting wise to this.

The whole quarterly-report mentality is a part of the same problem. We have to look at a business cycle, at least five to seven years, and not just demand that CEOs avoid environmental investments. They'll pay back handsomely, way above the price of capital, but not until two years have passed. So that means we may slightly miss the next quarterly report? God forbid. We have to change that.