No, they're not. It's an inconvenient truth. It's inconvenient because even though the nation is addicted to oil, a lot of politicians are addicted to money from the oil companies. And more than that, addicted to a comprehensive pattern of massive consumption of fossil fuels, and the pollution it generates, and desert wars to protect the source, and huge debts to pay for the oil. It's a big dysfunctional pattern. When you get trapped in a big dysfunctional pattern, it's hard to change. And we're in Category Five denial, still.

But there is an awakening, and politics, like the climate, is a nonlinear system. The potential for change can build up unseen beneath the surface. But you can sense it building up. And it builds up to a point when suddenly something triggers the release of all that pent-up energy. 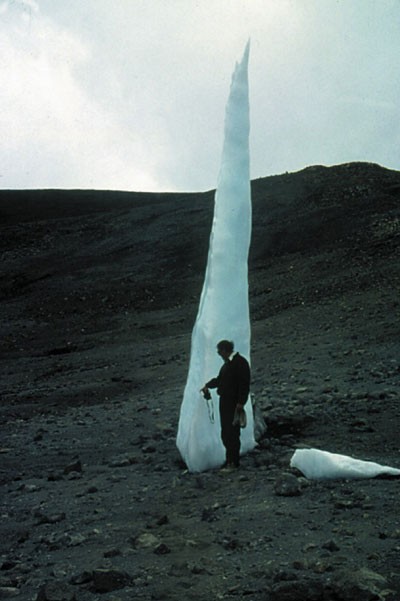 We have two gears in America, slow and lightning. In 1941, it was impossible to build 1,000 airplanes. But in 1943, it was pretty simple. When we make up our minds to do something, you might as well stand back and get out of the way. When, under President Kennedy, we made up our mind to put a man on the moon and bring him back safely in 10 years, we did it in nine. This will be the same thing. I know it's not easy, believe me. I have come face to face with resistance on every level. But it is yielding. It is beginning to yield.

Ever after 9/11, this administration seems to be unwilling to ask Americans to sacrifice. They'd rather send people $100 to buy gas than tell them to drive less.

[Snorts with laughter] You know, it's painful. "Let's give everybody $100." Do you watch The Sopranos? Tony Soprano beats up his driver. Did you see that episode? Some of his lieutenants are questioning whether he's got the moxie after his operation. So he comes back and he decides to just beat the hell out of his driver. And they're all going, "Whoaaa, the man's still got it." So after he does that, he sees the driver, and he goes and he gives him $100. That's what I thought of when I saw the proposal. "Hey, let's give everybody $100, because they've been beaten up by this."

So do you think they're right in their assumption that Americans are unwilling to sacrifice?

I think that the people are ahead of the politicians. I think that the willingness to sacrifice is connected to an overarching vision of what sacrifice means. The word sacrifice can be, like the word crisis, uni-dimensional, when it's actually made up of several factors. You've probably read where I've cited this old cliché about the word crisis the way the Chinese do it. Well, the word sacrifice is similar. It was a sacrifice when the American taxpayers financed the Marshall Plan after World War II. I'm sure the Chinese don't write it this way, but you could deconstruct the word sacrifice to wedge in the concept of investment in a situation like that. If people see that a near-term change is going to bring a mid-term or long-term benefit that is far larger, then they're willing to say, Yeah, we'll do this because it means that. Unfortunately, the word sacrifice sometimes gets compressed into a plea for masochism. "Ohh, you have to suffer. You have to do this because it's spiritually good for you." Nobody's sayin' that, or at least I'm not.

The word sacrifice, I think, is a difficult one, but going back to the Marshall Plan concept, what happened there is that the World War II generation, often called the Greatest Generation, rose to meet an overarching challenge in the form of global fascism, coming from Imperial Japan and Nazi Germany and Fascist Italy, and take on a war in Europe and the Pacific simultaneously. And they made sacrifices to do so. But the consequences of not doing so were unthinkable. So they transcended their limitations, and our nation transcended its limitations -- perceived limitations. In the process, they gained moral authority. They were energized and thrilled by the experience of sharing a common purpose, and setting aside the pettiness and bickering that we're all vulnerable to, and focusing on something that was inarguably crucial.

Having done so, they then found they had grown in their moral authority to the point where they could see clearly that the Marshall Plan was really a good thing to do. Even though it meant lifting to their knees the defeated Germans and the defeated Japanese. Even though we had just been face to face with them, looking at their bayonets. The American taxpayers paid for it -- heavily! It was a big expense. But it was wise. And it wasn't seen as a painful sacrifice. It was seen as a wise, visionary approach to building a better future.