As the presidential seal filled the screen on a recent episode of Saturday Night Live, viewers might have expected to see one of the show's regular impersonators-in-chief. But the fake president who opened the show turned out to be an erstwhile contender: former Vice President Al Gore. Dryly jabbing the Bush administration (and mildly mocking himself), "President Gore" looked back on the past five years of untrammeled prosperity, plummeting gas prices and the end of global warming. The latter victory, Gore confessed, had spawned unforeseen consequences: attacks by bellicose "renegade glaciers," which had already claimed several northern states. But Gore was resolute. Adopting the steely resolve that his former rival has made his stock in trade, Gore looked the camera dead-on and mock-pledged, "We will not let the glaciers win."

Global warming is not a joke to Al Gore. It is, it's fair to say, a crusade -- an issue he made the centerpiece of his presidential run in 1988 and his vice presidential candidacy in 1992, and one he has brought back to the fore since re-entering public life. Gore likes to quote the old saw about how the Chinese write the word "crisis" using the characters for "danger" and "opportunity," and he has seized opportunities by the handful: cofounding a green investment firm, Generation Investment Management, and a youth-oriented TV network, Current TV, and accepting a post on the board of Apple and a senior advisor position at Google. Not bad for a "recovering politician."

What's more, the man SNL once caricatured as a droning, robotic spewer of non-catchy catchphrases has indisputably lightened up since ending, at least for now, his career in politics. To see how Gore has changed his approach, you need only compare Gore's 1992 manifesto, Earth in the Balance, with An Inconvenient Truth, the documentary adaptation of what Gore calls his global-warming "slide show" -- a presentation he has been giving audiences since the 1980s. Where Earth in the Balance is a serious, historically minded ecological argument that ends with an extended analogy to the Marshall Plan (still a favorite point of comparison), An Inconvenient Truth (currently playing in Charlotte theaters, including Ballantyne Village Theatre and Concord Mills 24) finds Gore stepping into a cherry-picker to illustrate the spiking height of the earth's average temperature and ceding the stage to an animated Futurama interlude. (Truth's book version, too, is full of visual aids, including photos of Gore camping in the High Sierra in the early 1970s.) Sometimes, Gore's newly playful approach seems a tad forced; at one point in the movie, he's stranded for what seems like ages in front of a cartoon frog in sunglasses. But it's clear Gore is intent on getting his message out to audiences he's so far failed to reach.

The effort involves a few compromises. Gore, who in a 2004 New Yorker profile called George W. Bush "a bully" and "a coward," is apparently refraining from direct criticism while on the global-warming campaign trail (although he did recently compare George W. Bush to the scheming, homicidal president on 24). As we settle into our seats at a Philadelphia hotel, an aide brings in a copy of Rolling Stone featuring a rave review of An Inconvenient Truth. Gore flips to the cover, on which is a caricature of Bush in a dunce's hat and the text "The Worst President in History?" Gore pitches his voice to a falsetto parody of queenly remove and grandly remarks, "No comment. No, it would be ungraceful of me."

So yes, Al Gore does funny voices. And he watches The Sopranos. And he snorts when he laughs. If you think you already know what he has to say, read on.

According to the latest polls, 85 percent of Americans believe global warming exists, and 88 percent believe that it presents a threat to future generations. With numbers like those, why aren't we doing more?

Those same polls also sometimes measure the level of urgency that people attach to particular issues. And unfortunately, even though the awareness numbers are much higher now, the urgency is still quite low. Even though more people are connecting the dots and understanding that global warming is real, there are other dots that still need to be connected to produce an appropriate sense of urgency. The global scientific consensus has five elements [Gore ticks them off on his fingers]: Global warming is real. We're responsible for it. The consequences are very bad and getting worse, and headed toward catastrophic unless we act quickly. Number four, we can fix it, and number five, we can fix it because it's not too late. 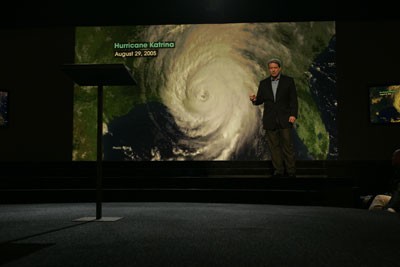 There are some people who say [counting back down on his fingers], OK, I accept that fact that it's real, but I'm not sure that we're the ones responsible for it. It may be just natural. [Three:] I'm not sure the consequences are all gonna be so bad. It may be some good, some bad. Maybe it's a wash. [Two:] I'm not sure that fixing it isn't gonna cause more problems than it will solve. [One:] And then there are people who say, it's too late, we can't do anything anyway. Connecting all five of those dots is really important. And that's what the movie does. That's what the book does.