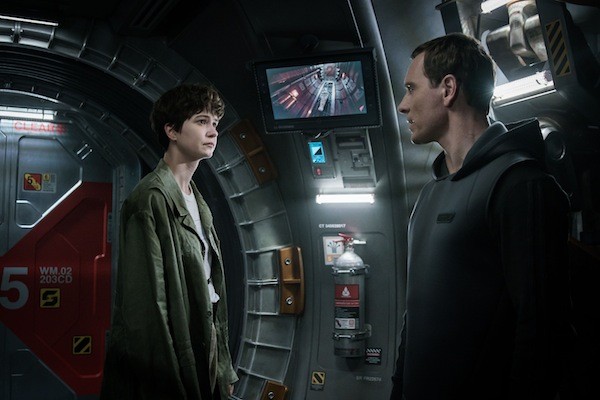 To say that Prometheus, Ridley Scott’s Alien prequel from 2012, divided audiences would be an understatement. Championed in some quarters for expanding the franchise’s mythology and lambasted in others for being too cerebral, the film was subjected to mixed word-of-mouth and saw its box office plummet after a strong opening weekend. That’s a shame, considering it was the first good movie in the series since James Cameron’s masterpiece Aliens opened in theaters back in 1986.

Perhaps mindful of the criticism yet not completely willing to dumb down the franchise, Scott has returned with Alien: Covenant, a movie that adds more action to the mix while also keeping the more philosophical points intact. Ironically, Scott will doubtless still get blasted by the naysayers, since fanboys are sure to gripe about the mixing and matching of styles. Yet more discerning viewers should find this a worthy experience, and if it recycles some beloved Alien/Aliens moments a bit too slavishly – well, so did Star Wars: The Force Awakens with the Lucas flicks, and that worked out nicely.

Once again, the crew of a space vessel – in this case, Covenant, a ship transporting two thousand sleeping inhabitants to a distant planet ripe for colonization – answers a mysterious call emanating from an unknown source. Seeking its origin, the crew members – among them the resilient Daniels (Katherine Waterston), timid leader Oram (Billy Crudup) and the android Walter (Michael Fassbender) — find themselves on a planet that seems perfectly suitable for the human race. And then they meet David (also Fassbender), the android from the mission detailed in Prometheus. No significant spoilers here, but let’s just say we find out what’s up with Prometheus lead character Elizabeth Shaw (Noomi Rapace), what became of the Engineers, and how the alien monsters will again figure into the proceedings.

Working in references to Milton, Michelangelo and Percy Shelley’s “Ozymandias” rather than to Marvel, mutants and Depp’s Jack Sparrow, it’s clear that Alien: Covenant isn’t a typical summer blockbuster (and one more reason why confused fanboys will run screaming into the night). For that, credit the new team of writers for building on the character brought to life by Fassbender in the previous film. David is one of the most complex and fascinating characters in the entire Alien franchise, and most of the story’s existential angst, ironic developments, and role inversions all link back to him. Fassbender again excels in the part, and his double duty in also portraying Walter (a completely different style of replicant) is endlessly intriguing. Other cast members aren’t quite as compelling, although it should be noted that, against all expectations, Danny McBride portrays a character (Covenant pilot Tennessee) who we do not want to see immediately eviscerated by the aliens.

When it comes to helming suspenseful set-pieces, Scott remains at the top of his game, with at least two tremendous sequences that are directed for maximum payoff. That’s not to say there aren’t some missteps along the way. The climactic skirmish on top of a moving vessel comes off as overkill, and there’s a plot twist so obvious that even someone with the I.Q. of a slug (or a Trump supporter; take your pick) should be able to figure it out. Yet even the occasional flaw can’t prevent Alien: Covenant from fulfilling its obligation as sound summertime entertainment.