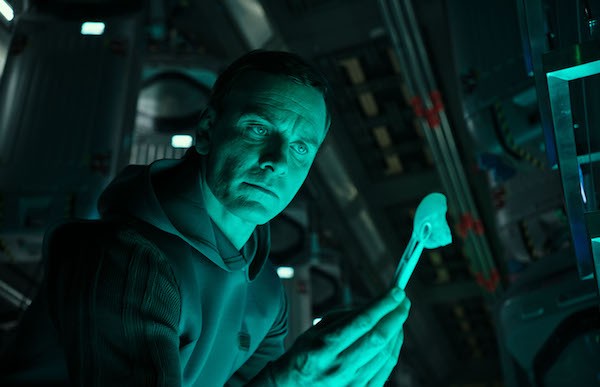 ALIEN: COVENANT (2017). Mindful of the criticism directed at 2012’s heady Prometheus yet not completely willing to dumb down the Alien franchise, Ridley Scott returned with Alien: Covenant, a movie that adds more action to the mix while also keeping the more philosophical points intact. Working in references to Milton, Michelangelo and Percy Shelley’s “Ozymandias” rather than to Marvel, mutants and Depp’s Jack Sparrow, it’s clear that Alien: Covenant wasn’t a typical summer multiplex filler — consequently (and predictably), confused fanboys ran screaming into the night and the film ended up earning even less than that awful Mummy movie. Once again, the crew of a space vessel – in this case, Covenant, a ship transporting two thousand sleeping inhabitants to a distant planet ripe for colonization – answers a mysterious call emanating from an unknown source. Seeking its origin, they find themselves on a planet that seems perfectly suitable for the human race ... and then they meet David (Michael Fassbender), the android from the mission detailed in Prometheus. David is one of the most complex and fascinating characters in the entire Alien franchise, and most of the story’s existential angst, ironic developments, and role inversions all link back to him. Fassbender again excels in the part, and his double duty in also portraying another replicant named Walter is endlessly intriguing. There are a few missteps along the way (for starters, the climactic skirmish on top of a moving vessel comes off as overkill), but when it comes to helming suspenseful set-pieces, Scott remains at the top of his game with at least two tremendous sequences that are directed for maximum payoff.

Blu-ray extras include audio commentary by Scott; a making-of featurette; deleted scenes; and a production gallery. 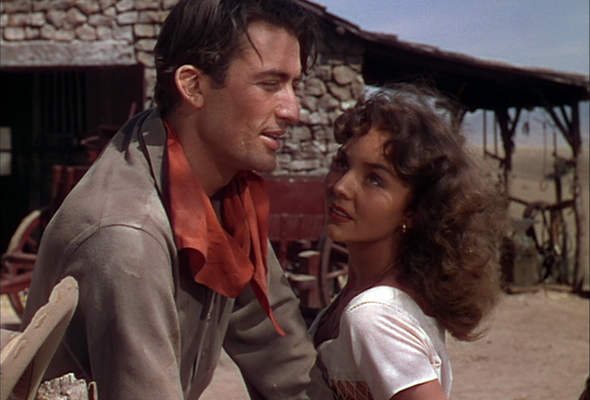 DUEL IN THE SUN (1946). Seeking to oversee another picture that could match the phenomenal success of his 1939 production of Gone with the Wind, David O. Selznick settled on bringing Niven Busch’s novel to the screen, with the producer writing the script himself. The movie received only mixed reviews from critics – it famously earned the nickname Lust in the Dust – but it proved to be a major box office hit thanks to the surrounding controversy (the Catholic Church condemned it for its sexual content) and its all-star cast. Jennifer Jones stars as Pearl Chavez, sent to live with relatives after her white father kills his unfaithful Native-American wife. Patriarch Jackson McCanles (Lionel Barrymore) views her with prejudiced eyes, but matriarch Laura Belle (Lillian Gish) and their cultured son Jesse (dependable Joseph Cotton) treat her with nothing but kindness. The wild card is Jesse’s ornery brother Lewt (Gregory Peck, excelling in a rare bad-guy role), who enters into a stormy tryst with Pearl that results in raging fits of jealousy and a few fatal shootouts. Martin Scorsese saw this at the age of 4, and it’s easy to see how it influenced his own career, what with its oversized emotions, sweeping camerawork, and ingrained violence. Leonard Maltin’s assessment pretty much nailed it: In a positive review, he labeled it a “big, brawling, engrossing, often stupid sex-Western.” Despite being pushed as a major awards contender, the film only nabbed two Oscar nominations: Best Actress for Jones and Best Supporting Actress for Gish (for his part, Peck was nominated that year for his starring role in The Yearling).

EVERYTHING, EVERYTHING (2017). A YA adaptation brandishing a WTF plot twist, this adaptation of Nicola Yoon’s novel is an agreeable movie with a startling final act that might catch young audiences off-guard as forcefully as, say, The Usual Suspects or The Sixth Sense walloped older audiences with their left-field reveals. Amandla Stenberg, The Hunger Games’ little Rue all grown up, plays Maddy Whittier, an 18-year-old who has spent practically her entire life never venturing outside her Los Angeles home. That’s because she has severe combined immunodeficiency (SCID), which basically prevents her body from fighting any and all infections. Since even stepping outside might prove to be fatal, she can’t ever leave the premises, with her physician mom (Anika Noni Rose) and a sympathetic nurse (Ana de la Reguera) keeping a watchful eye on her. It isn’t until a cute boy named Olly Bright (Nick Robinson) moves into the house next door and befriends her via text-messaging that Maddy finds herself willing to put her life at risk. Even within the confines of the narrative, the behavior of certain characters doesn’t always make sense, but there’s nothing forced about the burgeoning relationship between Maddy and Olly. Theirs is a sweet romance, and it’s a shame the filmmakers don’t trust it to stand on its own – instead, the picture is weakened by strains of whimsical fancy (many involving an astronaut) that probably worked better on paper than in practice. As for the third-act revelation, it provides some oomph to a storyline that had started getting fragmented by this point. It spins the tale in a new direction, and while some viewers might resent the darker implications it brings to the table, it certainly guarantees that the movie won’t be dismissed as merely another standard teen sudser.

Blu-ray extras consist of a making-of featurette and deleted scenes.

HOPSCOTCH (1980). Based on the novel by Death Wish author Brian Garfield, with Garfield himself penning the script alongside director Ronald Neame, Hopscotch is an extremely satisfying confection that derives most of its juice from yet another superlative Walter Matthau performance. Here, the acting great stars as Miles Kendig, a veteran CIA agent who’s always done things his own way. This irks his officious superior, Myerson (Ned Beatty), who demotes the field officer to a job in the filing department. Incensed, Kendig leaves the CIA, whereupon he lets it be known that he plans to write his tell-all memoirs — this of course really angers Myerson, who uses the agency’s resources to chase the wayward spy all over the globe. Loose and lighthearted, Hopscotch is breezy entertainment, offering fine supporting turns from Glenda Jackson as a former agent who becomes Kendig’s accomplice, Sam Waterston as Kendig’s sympathetic replacement in the agency, and especially Herbert Lom as a KGB officer who holds Kendig in high esteem. Mainly, though, there’s Matthau, whose character has a plan — and a quip — for every situation that might come up.

Hopscotch is rated R solely for language; interestingly, Criterion’s Blu-ray edition contains as an option the audio track that was used for the film’s television airings, with the profanity removed for family viewing. Other extras include 2002 interviews with Neame and Garfield; an amusing 1980 interview with Matthau on The Dick Cavett Show; and the theatrical trailer. 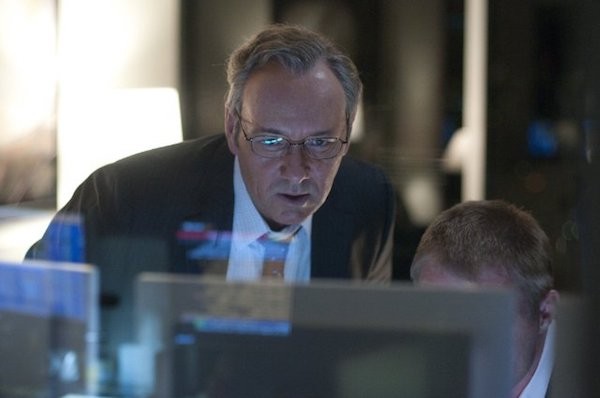 MARGIN CALL (2011). Focusing on the first rumblings of the 2008 financial crisis, this debut feature from writer-director J.C. Chandor details how a bright greenhorn (Zachary Quinto) at a fictional Wall Street investment firm takes some data handed to him by a laid-off employee (Stanley Tucci) and quickly figures out that the industry is headed for disaster. This sets in motion a series of after-hours meetings in which company employees of all stripes, from the new kids on the block (Quinto and Penn Badgley) right up to the ruthless CEO (a chilling Jeremy Irons), work to save their company, forcing them to make some moral decisions along the way. Of course, given these sharks, morality doesn't come into play often, but it can be spotted here and there — that's particularly true in the character of a trading-floor honcho (Kevin Spacey) who's uneasy about his role in the whole mess. Eschewing the straightforward characterizations (not to mention slick stylistics) seen in other like-minded films such as Wall Street and Boiler Room, Margin Call opts instead to show us that there are no heroes and villains, only villains and victims and poor souls weighing the merits of a Faustian bargain. (Hulu)

View from the Couch film review View From The Couch Blu-ray DVD Matt Brunson Alien: Covenant Duel in the Sun Everything, Everything Hopscotch Margin Call