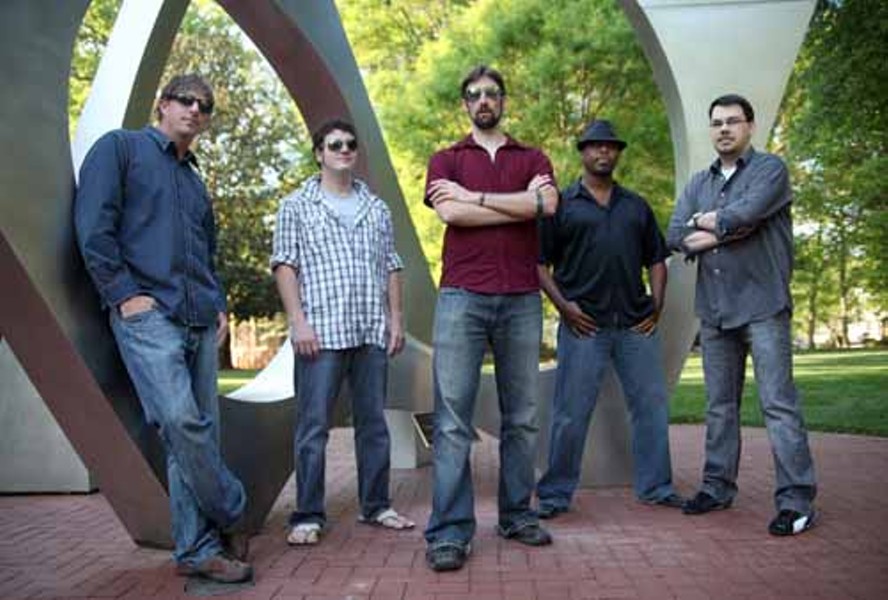 The blending of drums, keyboards, guitar, bass and a vibraphone joining forces to emit instrumental music may make one think of smooth jazz, but Charlotte's Actual Proof takes that combination to a whole new level.

The quintet's music finds a solid foothold as much in jazz as it does in funk, rock, blues and soul. This stuff isn't about sharing a message -- it's about creating an atmosphere and stirring up the energy in a room. They recently opened for Jim Weider's Project Percolator and The Mantras, in addition to playing their own headlining sets that can take on a life of their own.

It's no surprise the band is quickly growing its own following as they attract fans from all genres. "We play some places and people just really don't care that there are no vocals," says founding member and vibes player Eric Mullis. "They just like the way the music feels and can interpret their own meaning of it. The instrumental jazz-based stuff and the vibes make us unique in Charlotte."

Actual Proof formed in 2007 as a group of jazz musicians who realized there wasn't much of an audience for them in Charlotte and shared a desire to start something more unique. Mullis, who also handles the sporadic vocals via vocoder, is joined by Phillip W. Berkley III on bass, Scott Brower on drums, Silas Aldridge on keys and recent addition Jeremy Gamba on guitar. The computerized sound of the vocoder has merged well with the band's music when it's used on songs like "Future Time."

"I met Phil, Scott and Silas around town -- we played some gigs together in different settings and knew each other that way," Mullis says. "I was getting tired of doing that. There's not a great appreciation of standard jazz and I wanted to write some original music. There's a ton of jazz musicians in Charlotte that could be doing what we're doing, but for some reason we're the only ones."

The band's live show is infectious and, aside from outstanding technical musicianship, it's usually Mullis' energy that's most noticeable. Mullis has played percussion for roughly 20 years, but started focusing on vibes, an instrument he learned in high school, about five years ago. It's not often that you'll see someone hammering away on the vibes while shouting out to his bandmates and simply "getting into it" on every level.

"I do the same thing when I play drums," he says. "I just get really into it and the vibes are more freeing -- you're not stuck sitting down with all four limbs doing something. If you jump up when you're behind the drum kit, you'll miss the beat. It's freed up some energy for me and made it easier to get into it and not be so inhibited."

They've experimented for their live performances -- they recently teamed up with a visual artist who put together videos to show behind the band while they played. Mullis hopes to try similar ideas again in the future to help create something more visual for the audience to watch while they play. "I haven't had a lot of luck finding the right person to work with yet in order to really do it right and have it make sense," he says. "We'll also throw in breaks and change speeds to see what works the best for an audience. We'll extend parts or make things shorter judging by how the crowd reacts."

The general format of a jazz standard is to play a melody and then each band member has a chance for a solo. Actual Proof tries to break that mold, thanks to the suggestion of Carolina Live Music Society (CLMS) founder Micah Davidson, looking to take listeners on more of a journey instead of boring them with repetition.

The band's writing process is generally collaborative -- someone will bring in a general song structure and they'll develop it together. While most people may think that instrumental music lends itself easily to improvisation, the band doesn't easily fall into a jam band category.

"There's definitely room for improv in our songs," Mullis says. "If somebody's really tearing up a solo, we won't stop it to keep the form, we'll let it go. Our drummer is really good about throwing different dynamics in to slow things down or bring it back up. We're good listeners so we pay attention to each other, but we don't do as much improv as jam bands. We have an idea of where we want to go."

CLMS provided the band with the opportunities to open for the previously mentioned bands as a method to getting more exposure for the band's music. The band has released one official CD, Paradigm Shift, and some of the group's live shows have been posted for download on the CLMS website (carolinalivemusic.com) so fans can get better acquainted with their sound.

They try to play nearly every weekend, as much as they can, though they only play in the Queen City about once every two months. The gigs also depend on the venue. There are times when the band plays more traditional jazz-formatted music and others when they let go and show their more rock side. Mullis also finds time to be a part of the Bill Hanna Jazz Jam at the Double Door Inn on a regular basis.

"In some ways, we're two bands -- we're the more jazz set, jazz festival band, and we're the 'nastier' version," Mullis says. "In the beginning, we did it all and I think it confused people -- we'd play funk followed by something more jazz. We're still doing both, but it depends where we're playing."

For the next CD, the band is considering a double-disc with more "slamming funk" on one disc and more traditional jazz on the other.

"We have about 10 new songs that we've been playing regularly already," Mullis says. "We have enough for a full album, but we're thinking about doing the double album and most of what we have would be for a more funk album. We still want to play the jazz tunes because it's another avenue of expression, but we only have a few jazz songs. I would think that by the end of the year, we'll be recording again, but we're still paying off the last one."