A year without equity 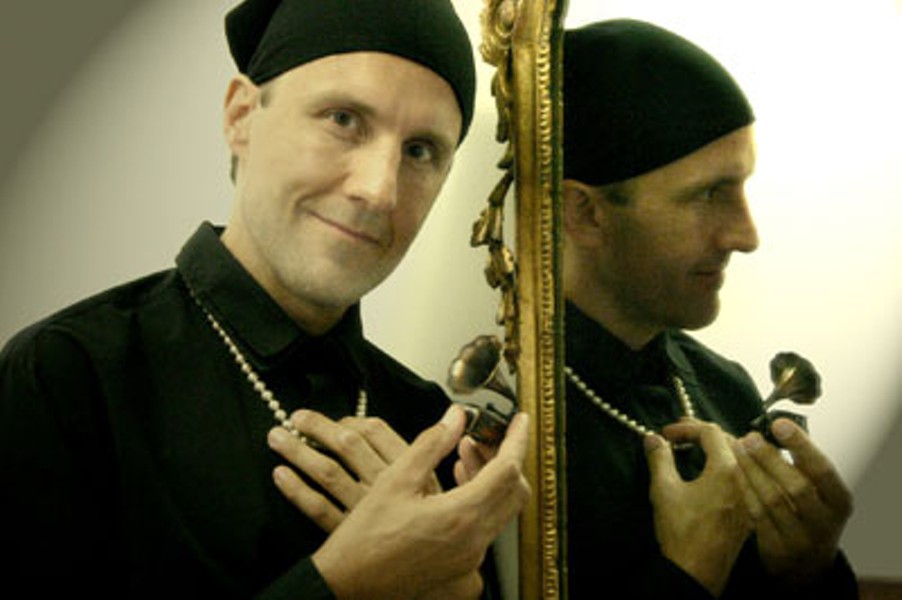 CL Show of the Year I Am My Own Wife, featuring CL Theaterperson of the Year, Scott Ripley.

Leah Webb as Titania and Matt Cosper as Oberon in Collaborative Arts' "Shakespeare on The Green," CL Theatre Event of the Year.

Back in 1987, when we first began covering the Charlotte theater scene, I never imagined the sort of unfertilized wasteland that prevailed for much of last year. Maybe I should have.

After all, the merger/takeover mindset was already in place in the heart of Banktown when the Loaf opened its humble door on Cecil Street. Historical reverence has never been a reliable hedge against the onset of bulldozers in our fair Mecklenburg. Preservation? Never heard of it!

Nor do we readily replace lost artifacts or enterprises with institutions of equal value and worth. Scavenging and development are the fashion.

Ah, the irony. For on its path to regional and national prominence, Charlotte Repertory Theatre engorged Golden Circle Theatre and PlayWorks before succumbing to the hubris of beancounters who presumed they could operate the Rep better than its founder. The takeover artists were taken over.

When that happened, Charlotte's full-time professional Equity theatre became as expendable as any other banking asset -- if the numbers didn't tally right. Artistic vision? Those are luxuries for such teeming urban centers as Greensboro and Fort Mill.

Yes, while Booth Playhouse remained without a Regional Equity theater for the first full calendar year in its history, Triad Stage -- a company that had established its own theater in the heart of Greensboro with a $5 million capital campaign -- retired a debt of $900,000. That's about 50 percent higher than the debt that prompted Rep's cut-and-run club to declare the sky had fallen.

No hand-wringing accompanied the opening of a new theater for the "Broadway of Christian Entertainment" on Carowinds Boulevard last July 8. In fact, the size of the loan that NarroWay Productions took upon itself for its only truly begotten HQ was never a revelation in 2006.

It was only when NarroWay proclaimed that March 2007 was Miracle Month that the world learned there was this $632K debt that needed cleansing -- with a modest $32K goal for the monthlong effort. Guess there's still somebody who has faith in us when the red ink reaches $600K.

Building back the vacated Booth's equity hasn't become a priority at the Char-Meck Arts & Science Council, sad to say. Rep's 2005 demise can be said to have caught the ASC off-stride when it occurred during their annual fund drive. There was "a hole in the product line," ASC prez Lee Keesler admitted back then.

But no effort ensued from Charlotte's less-than-robust donor community to plug the hole up.

So the percentage of ASC funding channeled toward adult theater, previously pitiful, is now downright embarrassing. And that hole is still there, leaking -- hemorrhaging -- some of the greatest theater professionals who have ever called Charlotte their home.

Fortunately, the Booth and the Center City scene haven't gone totally to seed. The N.C. Blumenthal Performing Arts Center continued its efforts, with impressive success, to bring the buzz back to the Booth. First they fired up the lights with Tony Award chanteuse Gretha Boston starring as Alberta Hunter in Cookin' at the Cookery. Then they overhauled the Booth's front orchestra, turning it into a sleek cabaret spot, and brought in a topnotch production of Shear Madness.

The comedy murder mystery, with a local-national mix of talent akin to the Rep's at its zenith, became the most crowd-pleasing homegrown theater production in Charlotte history. Before bowing out with a champagne toast to its cast on Dec. 31, Shear Madness logged a record-smashing 210 performances.

Other encouraging incursions were occurring on Tryon Street. Breaking away from SouthEnd, BareBones Theatre Group made the Duke Power Theatre its new home at Spirit Square. Having played an integral role in the City Stage Fringe Festival at the Duke during the previous two summers, BBTG was able to bring their old audience along with them. Mounting two of CL's top 10 shows of the year, including Best Comedy Five Women Wearing the Same Dress, dem Bones increased their attendance by 70 percent.

Collaborative Arts was even more of a grassroots phenomenon. Led by CL's Theatreperson of the Year, Elise Wilkinson, Collaborative lit up the Uptown with Shakespeare on The Green. There was a maypole merriment to their production of A Midsummer Night's Dream last spring. An amazing rally-round-the-cause collection of talent cemented its claim to our Theatre Event of the Year laurels.

Children's Theatre of Charlotte capped off their first season at ImaginOn with a superb Charlotte's Web and an awesome staging of The Shakespeare Stealer. Then they reprised their ultra-spectacular The Lion, the Witch, and the Wardrobe. With their link to Char-Meck Public Children's Library and their strong educational and teen programs, Children's Theatre is turning ImaginOn into synergy central on the local arts scene, particularly with the troubles yet to be solved at Spirit Square.