A Wrinkle in Time Misses Who, What and Why | Reviews | Creative Loafing Charlotte

A Wrinkle in Time Misses Who, What and Why

A WRINKLE IN TIME
** (out of four)
DIRECTED BY Ava DuVernay
STARS Oprah Winfrey, Reese Witherspoon 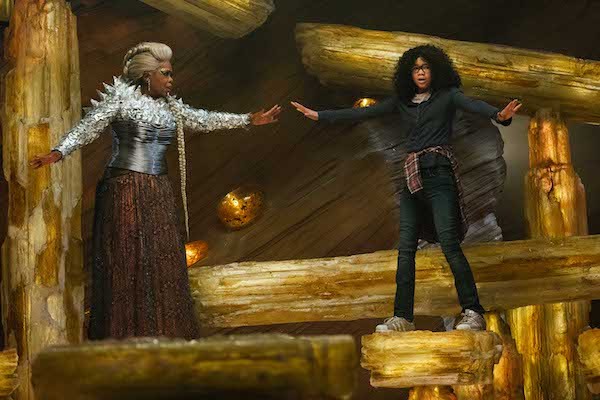 A literary classic becomes a cinematic clunker with A Wrinkle in Time, the ambitious but ultimately disappointing adaptation of Madeleine L’Engle’s lovely 1962 novel.

Remaining faithful enough to the plot of the book, this screen version finds Meg Murry (Storm Reid), still understandably upset over the disappearance of her scientist father (Chris Pine) four years earlier, being handed an opportunity to locate him thanks to the involvement of three celestial beings. Introduced to Meg and her friend Calvin (Levi Miller) by her younger brother Charles Wallace (Deric McCabe), the trio of Mrs. Which (Oprah Winfrey), Mrs. Whatsit (Reese Witherspoon) and Mrs. Who (Mindy Kaling) informs the children that Dr. Murry vanished upon discovering that the fabric of time and space can fold on itself. But Dr. Murry is now being held prisoner by an evil interstellar entity known simply as “It,” and with the members of The Losers’ Club off in their own movie, it’s up to these comparable outcasts to save the day – and the universe.

Ava DuVernay, who earned an Oscar nomination for the mesmerizing documentary 13th and should have earned one for the powerful drama Selma, seems paralyzed with reverence for the source material, as her direction is atypically muted and her set-pieces alarmingly flat. For a film that traffics in imagination and phantasmagorical sights, A Wrinkle in Time is surprisingly cumbersome in its visual splendor, with much of the film caught in a chokehold that’s mercilessly being applied by impersonal and deadening visual effects.

Worse, most of the actors are urged to deliver their dialogue in monotonous rather than melodious waves, none more so than poor Reid. Winfrey sounds like she’s already practicing for a presidential run, speaking her words in measured and drowsy tones, while Kaling’s Mrs. Who barely registers as a character. Only Witherspoon seems to be having any fun in her role, providing the picture with some much-needed pep (and until his character turns into a more verbose version of Pet Sematary’s Gage in the third act, McCabe also adds some life to the proceedings with his boyish enthusiasm).

A Wrinkle in Time is recommended for children, who will enjoy its colorful palette and benefit from its messages involving individuality, self-worth, anti-bullying, and other notable pursuits. But for the adults who accompany them, their only interest in Time will be in determining how much of it remains before the closing credits begin their crawl.