A View To A Thrill

Food and ambience are the tops at sky-high restaurant 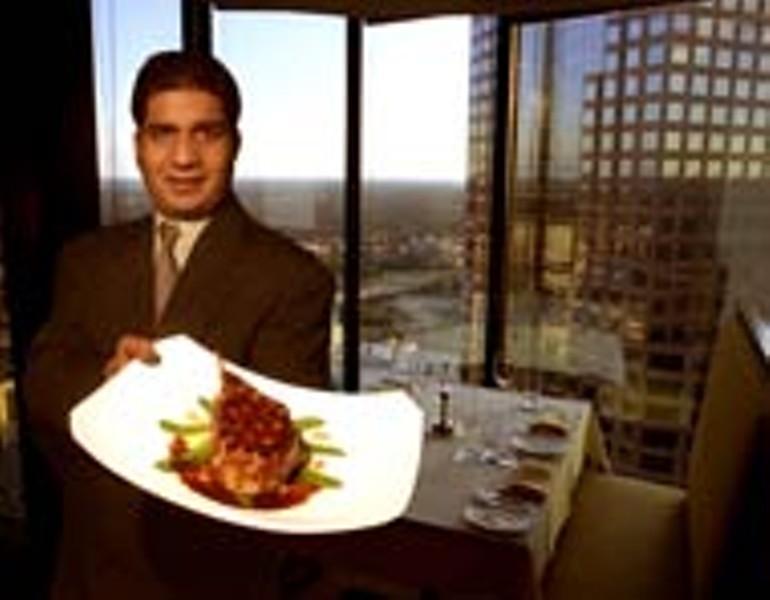 Radok Bentley's on 27th
Restaurants with a view are in a class by themselves. Often, the diner is simply there for the view - or a moving view, as is the case in some cities. These restaurants tend to have overpriced drinks and mediocre food. After all, when the rent is sky high, what else can a restaurateur afford? On the other hand, some places with an extraordinary view, such as a two-story glass restaurant I once frequented in Hong Kong, had extraordinary food as well as a breathtaking view. In either case, view restaurants typically are in demand because of their ambience, not the food. Think about it: What ego-driven chef wants his patrons looking out the window rather than oohing and aahing his food? Hence, the challenge.

In Charlotte, the Appalachian Mountains begin to reveal themselves at about the 20th floor of downtown buildings and at night the glittering lights have quite the "wow" factor. Who knew Charlotte was so enlightened? However, since the closing of the public restaurant in the Wachovia building years ago, tip-top dining has been the exclusive domain of the privileged class — either BOA executives in their corporate dining room or members of private downtown dining clubs.

That changed in October when spouses Jim Emad and Kay Bentley Emad opened the spacious 350-seat Bentley's on 27th on the top floor of the Charlotte Plaza Building (formerly the Tower Club). Looking up from the College Street sidewalk, you'll notice some glass bubbles at the top. That's some of the seating for the restaurant, about 375 feet above the ground. If you are seeking a vertical "wow" factor, this is the place.

Whether you love, hate or fear heights, the view from Bentley's is undeniably stunning. Iridescent lights seem to go past SouthPark, and the manmade spectacles of the BOA Stadium, the new arena and the towers of downtown seem more alive at night. Bentley's main dining room wraps around three sides with 100 seats beside the windows. If you sit near the bubble part, the look downward can be unnerving.

Though the hostess area, perpendicular to the stand of elevators, maintains that rigid sign-in club-like stiffness, the rest of the restaurant enchants as it unfolds on the journey to the table. A long side wall is punctuated with the Emads' art glass collection while the other side glimmers of gold. The main dining area is warmed by bevies of flickering candles, fireplaces, high backed booths for privacy, elegantly set tables and lush leather seating.

Jim Emad is not new to Charlotte restaurants. He paid his dues for two decades before opening his own. Originally from Iran, Emad arrived in Charlotte to study Mechanical Engineering at UNCC, but got sidetracked by working part time at La Tache (one of Charlotte's better restaurants in the 1980s). Then he spent 17 years at the Fishmarket (once in SouthPark) before being on the opening team at LaVecchia's downtown. His history of being in more elegant environments is evident in this restaurant's concept. "I wanted to serve American and French classic dishes and do a lot of tableside presentations," he noted.

Emad hired Bill Schutz, who attended the New York Restaurant School and worked in the kitchens at Tribeca Grill, La Caravelle, and for David Bouley in Manhattan. Bentley's dishes are as classic as the piano songs performed on Friday and Saturday evenings. For those under 25, this archetypal cuisine may seem new: Dover Sole, Chateaubriand, Steak au Poivre, Bananas Foster, Cherries Jubilee, even Crepe Suzettes. When was the last time you saw these and the long maligned Brussels sprouts on the same menu?

But if you can pry your eyes away from the view and peruse the menu, you'll find some dishes have modern touches: jasmine rice, bok choy and sashimi. Bentley's menu changes quarterly, but some of the classics will remain on the roster year round. Twenty percent of the dishes are performed tableside.

Those who excel on the guéridon (mobile cooking table), or behind the sushi bar for that matter, are entertainers. They deftly perform magic at close quarters. It's slicing, saucing and flambéing that keeps the diners' eyes and noses in rapt attention. It's all about the show and fortunately, Emad stays close at hand to assist the unsteady hand of new employees. Our pepper steak's cognac sauce flamed under his expert hand, although the cut of meat turned out to be slightly chewy.

More impressive, though, was an elegant Caesar salad, a moist and flavorful duck a l'orange (heady with citrus), a first-rate diver scallop appetizer with red beets, and a quite delicious crab cake. For the finale, it's all about the show, and the Crepes Suzette will restore an ardor and respect for the classics.

Bentley's is a happy surprise for those who don't expect much from a vertical restaurant. The Emads go the distance to ensure a memorable experience.

Have a restaurant tip, compliment, complaint? Do you know of a restaurant that has opened, closed, or should be reviewed? Does your restaurant or shop have news, menu changes, new additions to staff or building, upcoming cuisine or wine events? Note: We need events at least 12 days in advance. Fax information to Eaters' Digest: 704-944-3605, or leave voice mail: 704-522-8334, ext. 136. To contact Tricia via email: [email protected].