A Snitch in time 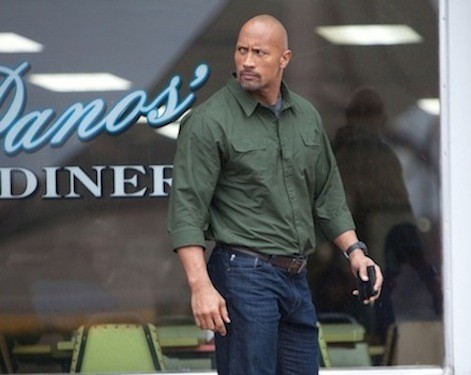 Let's face it: 2013 has so far been a brutal year for multiplex action stars. Jason Statham's Parker has grossed $17 million, Arnold Schwarzenegger's The Last Stand has earned $11 million and Sylvester Stallone's Bullet to the Head has scraped together an especially anemic $9 million. (I'd like to think the only reason Bruce Willis' awful A Good Day to Die Hard has earned a respectable $40 million to date is because it's a franchise sequel; without John McClane as the hero, I expect it would have fared much worse.) Now Dwayne Johnson enters the fray with Snitch, and what's interesting to note is that, while his fellow macho men are content to coast, the artist formerly known as The Rock actually attempts to do something different, appearing in a movie that, contrary to both expectations and popular belief, isn't an action flick as much as a thoughtful drama peppered with a couple of requisite car chases and shootouts.

Snitch is one of those movies that opens with a statement declaring it's based on a true story — given the increased frequency of this claim combined with the laxity with which it's now employed, I expect to see such a header at the start of Jack the Giant Slayer and Iron Man 3, among other upcoming titles. At any rate, it's the closing comment that resonates more deeply, the widely acknowledged one that nonviolent, first-time drug offenders generally face more prison time than murderers and rapists. Snitch analyzes that dire problem in the context of a drama about a father who makes Herculean sacrifices for the sake of his son. Jason (Rafi Gavron) is a college-bound kid who initially refuses but then reluctantly agrees to hold a shipment of ecstasy for his drug-dealing friend. But when the shipment arrives at his door, the Feds swoop in and arrest him; matters become even worse when, for the sake of a reduced sentence, his pal fingers him as the real drug dealer, a lie that leads to a mandatory 10-year sentence alongside hardened criminals. His dad John (Johnson), a respected business owner, finds that the prosecuting attorney (Susan Sarandon) won't budge in the matter, so he offers her a deal: In exchange for reducing Jason's sentence, John will go undercover and nab a real drug lord or two.

Johnson isn't exactly our most versatile movie star (although he was awfully funny in the otherwise dismal Get Shorty sequel, Be Cool), but he does possess charisma to burn, and it's this natural screen presence that allows us to accept him in this role. His character's sense of frustration and outrage over what's happening to his son is palpable, and this sets up some interesting encounters opposite the ambitious d.a., a conscientious field agent (Barry Pepper, hiding underneath a biker-ready beard) and an ex-con (Jon Bernthal) who tries to help John while keeping his own record clean.

I certainly don't want to oversell the film: The direction by Ric Roman Waugh is more workmanlike than inspired, and the third act promises more thrills than it actually delivers (John states that he has this great plan to make everything right, but it proves to be about as complex as boiling water). Still, moviegoers finding themselves between The Rock and a hard place — say, an auditorium showing the aforementioned Die Hard debacle — might agree that a switch to Snitch isn't a bad idea at all.