A Secret History of Hipsters on the Links

Everybody knows true jocks love football and basketball. Stoners and artists prefer to hike or camp or surf or skateboard. And we all like baseball.

But what about golf?

When the CL staff was putting together this week's special section on stuff to do during the PGA Championship, some of the staffers in the office balked.

"So tell us again: Why is Creative Loafing doing a golf section?"

Because, dammit, golf is not just your executive granddady's sport anymore. You don't have to wear the uniform of Polo shirts and pressed slacks. 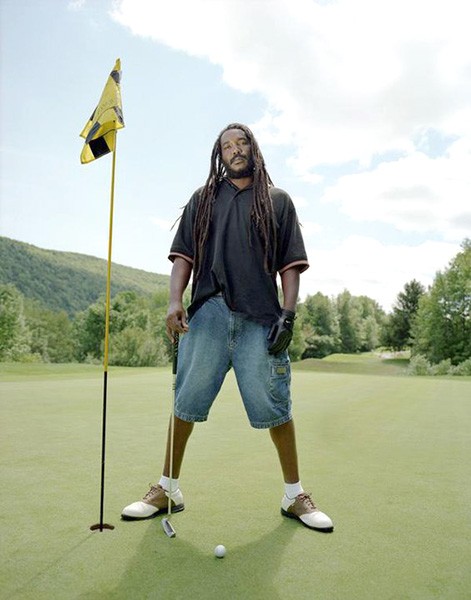 Or ask the '90s social-justice-rapper-turned-jazz-pianist Dred Scott, who you'll find on the links at Dyker Beach in Brooklyn when he's not tickling the keys at the Village jazz club Smalls.

And we can't just credit Tiger Woods for hippifying golf, although he did make it less white.

Alice Cooper has famously golfed for decades and is considered one of rock's best players. He even offered the occasional tip to his fellow rockers back in the day. Like the late Lou Reed — you know, the guy who co-founded Velvet Underground, the infamous and influential New York City art-noise-rock band whose strung-out members hung out at Andy Warhol's Factory?

"Lou goes, 'I keep pushing the ball to the right,'" Cooper recalled to Golf Digest in 2008. "I tell him, 'Lighten your right-hand grip so the club will turn over.' He starts practicing this motion, totally into it, and then it sort of hits us at the same time. I mean, could anyone have dreamed 25 years ago, sitting in the Chelsea Hotel, that Lou Reed and Alice Cooper would ever be having that conversation?"

Andy Brumer is a poet and writer who pens book and art reviews, but also happens to write extensively about golf for Golf Digest, Golf Illustrated, Links Magazine and Golfweek. In his book The Poetics of Golf, Brumer talked with Robby Krieger, former guitarist of the Doors, who compared golf to making art.

"When you think about it, to get a little ball this big from 500 yards away into a little hole in four or five shots is pretty impossible," Krieger told Brumer. "And the only way you can do it is by overcoming your self, and that kind of pushing away at the barriers of your limitations is what art is all about. It's like Zen — you bring something up from deep within."

Closer to home, the dudes who once called themselves Hootie & the Blowfish play golf, but that isn't so surprising. And while Michael Jordan isn't as dazzling on the golf course as he was on the basketball court, he's pretty cool, though not cool in the art sense.

The point is, we know that on any given night at Snug Harbor or Petra's or Hattie's — or on any given day over at C3 Lab — there are golfers among you indie rockers, rappers, painters and sculptors. You may not be admitting it, but you're out there.

So it's for you — not to mention all those folks who are flocking into the Queen City this week for the big tournament but don't want to be hanging out at some stuffy south Charlotte country club the whole time — that we offer CL's guide to non-uppity golf-related fun in the Charlotte area.

(Self-disclosure: I played a little golf in high school. I wasn't very good at it, and I only did it to get out in the woods where I could hide out and smoke something other than cigarettes. But I played.)

You? It's OK, you can remain anonymous.