A Refuge For Art

by David A. Moore 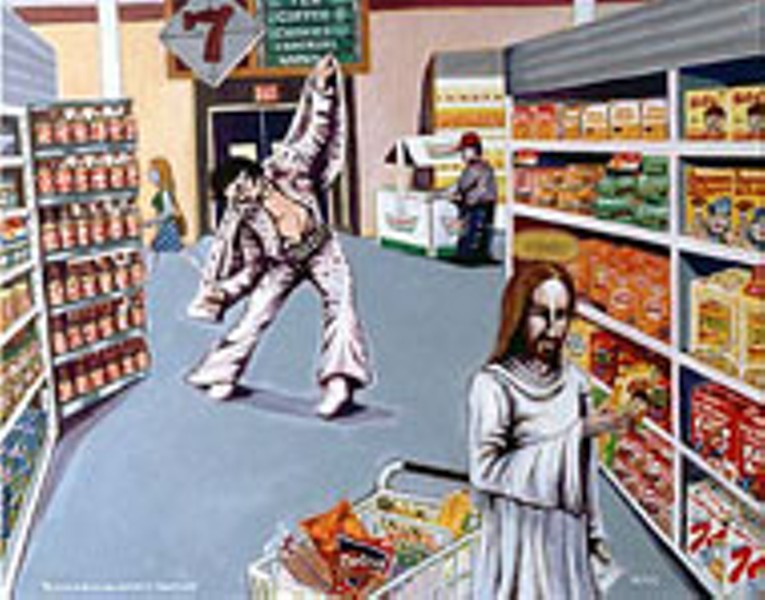 JESUS AND ELVIS GROCERY SHOPPING by Jerry Kirk, included in Sanctuary's Art In America exhibit
Sanctuary is a new-ish gallery owned and operated by DC transplant Jerry Lee Kirk. Art in America, currently on display through September 3, is the NoDa gallery's second exhibit. "Initially I opened the space as a place to show art for myself and my friends," Kirk explains. "But you know, the public isn't going to want to see artwork by just a handful of people, so of course I wanted to get more artists and different kinds of art in here. That's what this show is about."With this latest installation I wanted to focus on mostly local artists, so that's what you're seeing on our walls now. Many of these artists are self-taught, so in a lot of ways, this is an outsider art show."

The gallery is without question a patchwork quilt of various styles and media.

Bryan Sykes has sold his African-influenced carved bowls and boxes around North Carolina for years. According to Kirk, however, this is Sykes' first gallery exhibit.

"My woodturnings -- bowls boxes and vases -- are divided into two groups," says Sykes. "Turnings made from a single piece are cut out of a log with a chainsaw, roughed out on the lathe to the general shape, and dried for a minimum of one year before finishing."

Syke's creations use diverse species of wood from different countries, selecting them for their color, grain and hardness. Surprisingly, he uses no paints or stains even though the items often appear smooth and glossy.

"Construction of this type requires planning," he explains. "Some vessels contain 1,000 or more pieces of wood."

Sykes is new to the gallery, as are a number of others in this exhibit.

Newcomer Gregory Neal's photos include religious imagery, "found" art, Native American and Southwestern history and culture, landscapes and people. A photographer for 25 years, he has used his photographic skills to help raise funding for AIDS organizations and for missions and charities in Mexico, Kentucky and Charlotte. He's got a penchant for shooting objects I particularly like: old movie theater signs and crumbling old churches.

Robert Sebrosky assembles and designs acrylic pieces to create his "Star Sculptures." Also new to the gallery, his creations are based on the geometry of Platonic solids and their symmetries. The unique works are solid or multi-colored in different sizes with various numbers of star points and are created to hang indoors or out.

Originally from Santa Monica, CA, new Charlottean Violeta Moreno's paintings are heavy-textured, almost three-dimensional sculptures composed mostly of oil and acrylic. Moreno demonstrates a wide scope of capabilities with her work; in pieces like "Fifth Sun," an almost Egyptian-like outline of a woman is seen hovering over a sun. With "Alligator" she retreats from the heavy usage of oil and acrylic into an ink wash, capturing an alligator bobbing on the surface of the water as seen from below.

Guy Raymond (another newbie) works in oil to create almost primitive art pieces, such as "Shepherd," which shows a Christ-like figure leading a flock of sheep and "Two Girls," another similarly styled image but clearly more provocative. One woman stands before a table, topless, reading a book. The other is wearing a bikini and leaning out the window of a squalid little apartment, apparently waving at a passerby.

"My creative fire was lit at the age of 10 while secretly viewing my Dad's Playboy magazines," offers Raymond. "A photo of two men playing tic-tac-toe on a woman's derriere opened a whole new world of creativity for me."

Raymond describes his art as a "reflection of my desires, fantasies and emotions."

Tommy McLaurin -- a resident of Rockingham, NC -- is the recipient of several awards for his paintings. McLaurin's influences are clear: art deco, O'Keeffe and Caulder. His work is mostly abstract and explores his own psychology, he says, "through highly dimensional planes in asymmetric relation of organic forms."

The viewer can get a taste of McLaurin's psyche when looking at "Lucid Mechanisms," an oil on canvas painting that resembles a giant bio-mechanical monstrosity composed of snail shells and human noses.

Raed Al Rawi's work is not new to Sanctuary, but his distinctive style certainly merits mention here. "The Dance" -- acrylic in hues of blue and purple contrasted with yellow and orange -- resembles a Mardi Gras costume ball. It's particularly interesting because of the artist's cultural background and the distinctly American flavor to the image. A native of Iraq, Al-Rawi was visiting the United States in 1980 when the war between Iran and Iraq exploded. He decided to stay in the US, pursuing a career as a graphic artist and a designer. His artist statement and press kit indicate there's a lot of phenomenal work we're not seeing here -- I'd personally like to see more.

Rusk Masterton is another returning Sanctuary artist. Also a musician, he is a member of the jazz/reggae/rock band Tranzend. His work as a painter, while abstract in concept, is a realistic depiction of non-reality. What the hell does that mean, you ask?

Take a look at "Breakfast in Baghdad." I'd love to have Masterton tell me what he was thinking during the creation of this effort. Here's my take: against a black background of acrylic, a multi-colored sky hovers over a fish in mid-air while two-legged eye creatures watch a moddish-looking television set with a big eyeball in the middle of the screen. I detect someone else who's had a past experience with hallucinogens.

Gallery operator Jerry Lee Kirk can't go without mention here -- his work is whimsical and eye-catching in a way that I've seen captured only by other artists such as Picasso, Peter Max and Paul Cadmus. He loves to create crowd scenes that are busy and funny with lots to look at, as well as downright hysterical absurdities like "Jesus and Elvis Grocery Shopping," while at the same time he's capable of surreal imagery, as in the piece titled "Happy." It made me think of scary clowns.