A most violent year

Ryan Pitkin A Skytower observation deck now sits just feet from where a couple was shot during a robbery in December.

For Bruce and Joanne Parker, Dec. 17 had been a night out in Plaza Midwood with friends like many others the group had enjoyed in the past.

They had left Legion Brewing and were walking to their car in the parking lot of Bistro La Bon, where they had eaten dinner earlier in the night, unaware their lives were about to change due to a random act that would shake a neighborhood already coming to terms with a recent spate of violence.

The Parkers were about to cross paths with Jamall Glenn, who had pulled into the parking lot just minutes before after telling his passengers, Ebonee Ward and Antonio Worthy, that he needed some quick money. Worthy and Ward would later tell police that they had been popping Xanax pills all day, to the point where Ward had a blurred memory of what was about to happen. According to Ward and Worthy's statements to police, Glenn got out of the car and opened the trunk. The two told officers they heard him yelling at someone to "Let it go," and then gunshots rang out.

Two nearby police officers working off duty as security ran to the scene and found Bruce and Joanne Parker both suffering from gunshot wounds to the gut. While one officer helped the Parkers, another chased the suspects. Shortly thereafter, Glenn flipped the vehicle he was driving near Presbyterian Medical Center in the Elizabeth neighborhood.

While Ward and Glenn fled the scene, Worthy was immediately arrested, and the other two would be taken into custody before sunrise. All three face a bevy of charges, including assault with a deadly weapon with intent to kill, and they're expected to each face indictments for attempted murder as early as this week. A fourth suspect was also later arrested in connection with the case.

Bruce and Joanne Parker survived their initial life-threatening injuries, but are now marred for life by the wounds they received. The bullet that fractured part of Joanne's spine will be forever lodged in her lower back, as it's too close to the spine to remove. Bruce underwent emergency surgery to repair injuries to his bladder, stomach and intestines.

The robbery shook a community still reeling from the unsolved murder of a young woman walking home after a night of work and play in Plaza Midwood in October. It's still unclear why or by whom 26-year-old Katherine Jones was killed on Oct. 16, but her death was just one in a recent string of violent crimes that have started a conversation about public safety in one of Charlotte's most popular neighborhoods. In the four-month span between September and December 2016, there were four aggravated assaults, four armed robberies and one homicide in Plaza Midwood. That's about double the rate of violent crime in the previous eight months leading up to September. Jones' murder was the first homicide in Plaza Midwood in years.

For Teresa Crawford, who was with the Parkers on the night they were shot, the experience of that night has changed the way she thinks of one of her formerly favorite neighborhoods.

Crawford attended the bond hearings for Glenn and Ward on Dec. 30, and was joined by a dozen others, some of whom are close friends of the Parkers and others just concerned residents of Plaza Midwood.

Crawford — who started a GoFundMe account that has raised more than $13,000 to help with the Parkers' medical expenses — said she's been blown away by the reaction from a community of strangers who want to stand up against the recent violence.

Lt. Steven Durant with the CMPD has worked in the neighborhood for more than a decade. He says he truly believes Plaza Midwood is a safer community now than in years past. 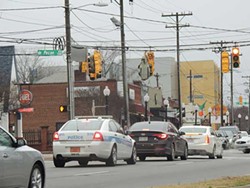 While that may be true, that there's been a recent uptick in violent crimes is undeniable, and CMPD recently announced some new efforts to fight back against robberies and other crimes. These efforts include bringing in six officers on bike assigned to patrol the neighborhood during evening hours, assigning one to two patrol units to specifically patrol that neighborhood around the clock and offering overtime pay to officers who volunteer to patrol the area during what would normally be their time off.

Durant and other officers have also been attending community meetings to discuss safety issues with residents. Some have vented frustration with the seeming lack of progress into Jones' murder investigation, and he says he has to repeatedly tell business owners and residents that even admitting whether or not CMPD has a suspect or lead in the case could potentially compromise the investigation.

Some residents have decided to get proactive in helping curb some of the violence the neighborhood has been experiencing. Scott Yamanashi, who has lived and worked in the neighborhood for more than 20 years, became an advocate for victims of violence after being shot during a robbery at Snug Harbor in Plaza Midwood in 2008. He has been working with Crawford to help inform the Parkers of their rights as victims during the upcoming prosecution of those involved in their robbery.

Yamanashi experienced some blowback recently when he took to a private neighborhood Facebook page to suggest that residents form an armed bike patrol to ride around the neighborhood's business district during late-night hours following Jones' murder. Some on the page were outraged at the idea of armed citizens patrolling the neighborhood, and Yamanashi was confronted by a man as he tried to speak to Mayor Jennifer Roberts at a recent community meeting about the recent murder and other violence.

Yamanashi still patrols the neighborhood by bike, checking in on friends working at various businesses that operate into the early morning, but he stopped carrying a weapon while doing so following that meeting. He said that despite the strong reaction to his suggestion, he thinks the Facebook page is a good way for residents to track crime and communicate about ways to stop it, although he recognizes that it's "a double-edged sword."

Sometimes the open nature of the forum can lead to mistruths and misunderstandings. For example, police recently tracked down a man who had posted pictures of injuries he said he had gotten after being robbed and beat up in the neighborhood. Once they found him and questioned him in hopes of finding the suspects, his story was found to be a fabrication.

"It is a good forum for communicating the court stuff that I've been doing with these people, the ongoing efforts to try to talk to the police and try to talk to people at the city level, to try to really create more awareness for people to be more safe when they're walking around and stuff," he said. "A lot of people like to sling arrows and they don't do their research or they just kind of have opinions and aren't really willing to debate it or talk about it. I've always offered to talk to people about it instead of coming back harshly to people. I'm trying to help people here, do you want to help or do you want to blast me? So that problem that we all have with social media surfaces on that page and it's a perfect example of it."

One person always willing to carry the conversation about public safety forward is Jenna Thompson, founder of community advocacy group Plaza Midwood Shows Up. Thompson said she appreciates the work Yamanashi does in his efforts to fight crime in the neighborhood, although she was against the idea of an armed bike patrol.

"I don't necessarily think that's a great idea having armed patrol. Obviously the most effective way to get it under control is for people in the community to be aware and to protect ourselves, not necessarily through arms though," Thompson said. "I don't think that everyone should have arms without proper vetting and training, especially in an organized sense. Personal protection is one thing, but when you go out with guns and try to protect other people, that's asking for trouble."

Thompson stressed the importance of using a buddy system when walking around the neighborhood at night and surrounding one's self with a group of people who can be trusted so as not to end up alone late at night and vulnerable to violent crime.

Thompson has begun efforts to make certain locations less shady, literally. Her most recent undertaking with Plaza Midwood Shows Up was to begin a discussion about raising funding for more lighting in certain areas of the neighborhood that see a lot of foot traffic but aren't properly lit. That project is still in the preliminary stages, but she names the alley next to Snug Harbor and the area behind The Diamond as places she'd like to see visibility increased at night.

Thompson and Yamanashi agree in their hopes that outsiders won't let the recent slew of violent incidents dissuade them from visiting the bars and restaurants and other venues in the area. While Yamanashi said he understands Crawford's hesitance to return to Plaza Midwood, he's hopeful that the recent acknowledgement of the uptick in crime by the city is the beginning of a legitimate effort to face the neighborhood's problems before they get out of control.

"I love the fact that we have such a great neighborhood, but I don't blame people for not coming back because of the safety issue. I think time will tell, but I think those people will come back. We all have a good history in that neighborhood and we don't want to see it to where we can't go," he said. "For me it's right there on the precipice of becoming a neighborhood where this is going to be a problem for a while. Right now we're at the crossroads, and fortunately the city is stepping up but I think they need to step up some more."

In the meantime, Yamanashi will continue patrolling the neighborhood on his bike, armed with nothing but his watchful eyes.