Lady in the Water: A Night to dismember | Reviews | Creative Loafing Charlotte

Lady in the Water: A Night to dismember 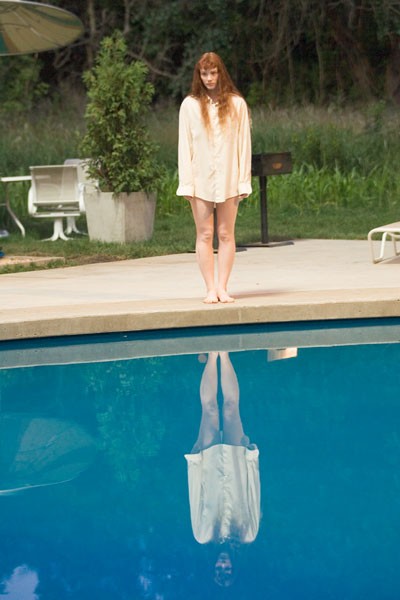 It was Alfred Hitchcock who famously declared (with tongue in roly-poly cheek) that "all actors should be treated like cattle." M. Night Shyamalan, who earlier in his career had been inexplicably compared to Hitchcock by many scribes who should have known better, takes this notion even further (and certainly more seriously): In his view, all of humanity should be treated like cattle, docile and dim-witted creatures over which he serves as ultimate lord and master. It brings to mind the quip that Citizen Kane co-scripter Herman Mankiewicz tossed off in regard to the egotistical Orson Welles: "There but for the grace of God goes God."

For now, though, we're stuck with Lady In the Water, which was originally conceived by the auteur as a bedtime story for his daughters. It's a lovely sentiment and as fairy tale fodder for small fries to lull them off to Lalaland, it works just fine. But as a major motion picture aimed at adult and teen audiences, it's a dud, at once ridiculous and risible.

Set in a Philadelphia apartment complex, the picture centers on superintendent Cleveland Heep (dependable Paul Giamatti) and the strange occurrences that take place after he discovers a sea nymph living in the building's swimming pool. No, it's not Darryl Hannah; instead, it's Story (The Village's Bryce Dallas Howard, required to do nothing but blink those saucer eyes in an attempt to look ethereal), who explains that she comes from the Blue World, a place full of mythical creatures who seek to reunite humankind with its more gentle side. These beings are called Narfs, and their sworn enemies are the vicious Scrunts, wolf-like creatures whose grassy-green fur makes them look like they could easily be vanquished with a dependable lawn mower. Story needs Cleveland's help to return to her natural nautical habitat -- in short, he must protect her from the resident Scrunt until an eagle known as the Great Eatlon can swoop down and whisk her away. Residing just on the edge of the complex, in the adjacent woods that seemingly run the length of Philly itself, are the three killer monkeys known collectively as the Tartutic. Their purpose, it seems, is to remain in the backlot trailer until the director brings them out for a nonsensical climax.

George Lucas received flack for the retarded names he and his kids dreamed up for the characters in the more recent Star Wars trilogy (Count Dooku, Elan Sleazebaggano and so on), and Shyamalan's choices are just as eyebrow-raising. The moniker Cleveland Heep seems to be a combination of David Copperfield's Uriah Heep (though he has nothing in common with the Charles Dickens character) and, uh, the city of Cleveland, which maybe entered Shyamalan's mind because it isn't too far from Philadelphia as far as major US burgs go. Naming the fairy tale protagonist Story is so simplistic that even a 5-year-old would develop a migraine contemplating its heavy-handed symbolism. As for the various creature designations, wondering if any of them had any basis in actual mythology, I conducted an Internet search. It appears all did spring from the mind of Shyamalan, though two of the words do pop up in the Urban Dictionary. "Narf" appears to have accumulated a dozen meanings (one online example: "I narfed a huge pair of knockers"), while the definitions of "scrunt" are so nasty I won't repeat them here. Like I noted, Shyamalan obviously made up this word on his own; otherwise, he's one sick pup.

Requiring characters to behave in illogical ways and basically making up the rules of the game as it goes along, Lady In the Water grows more ridiculous by the minute, reaching such high levels of absurdity that by the end you can't help but wonder if it was all a put-on, Shyamalan's "fuck you" to the critics, studio suits and audience members who largely abandoned him with The Village.

In the most glaring example of a temper tantrum since James Cameron threw a fit over the fact that not everybody on the planet thought Titanic was the pinnacle of motion picture perfection, Shyamalan's animosity leads to the creation of the one human character in the entire movie who isn't a saint. Mr. Farber (Bob Balaban), one of the apartment dwellers, is a film critic by profession -- he hates movies, hates romance, hates life, has no friends, has no sense of humor and has no qualms about giving bad advice. The solution, of course, would be to allow this pathetic, pasty-faced drone to reinvigorate himself with a marathon showing of Marx Brothers classics (with some Capra and Sturges thrown in for good measure); predictably, Shyamalan instead has him meet a gruesome end at the paws of the Scrunt.

My favorite character, though, has to be Vick, a writer who, it's prophesied by Story, will at some point in the future pen an important book before being assassinated and thus emerging as a martyr. According to Story, this book will prove so influential that, with the guidance of a future president, it will single-handedly reshape the mind-set of the entire planet and make the world a better and more peaceful place to live. Wow, that's quite some book! And to play Vick, a man who topples even Gandhi and Martin Luther King as an admired figure for social revolution through peaceful means, what great actor did Shyamalan tap to play such a sainted, revered role? Robert Duvall? Gene Hackman? Denzel Washington? Why, no. M. Night Shyamalan cast M. Night Shyamalan. After all, who else could play such a great man?

Even Hitchcock was discrete enough to only appear in split-second cameos in his own pictures. By comparison, Shyamalan (whose on-screen appearances always suggest he just woke up from a nap) racks up so much screen time in his pictures that, borrowing Story's power, I prophesy that one day he'll come to believe he should add "leading man" to a resume that already packs "director," "writer" and "producer." I can see it now: