A new designer look for Nabucco

Opera Carolina kicks off its 66th season with new production 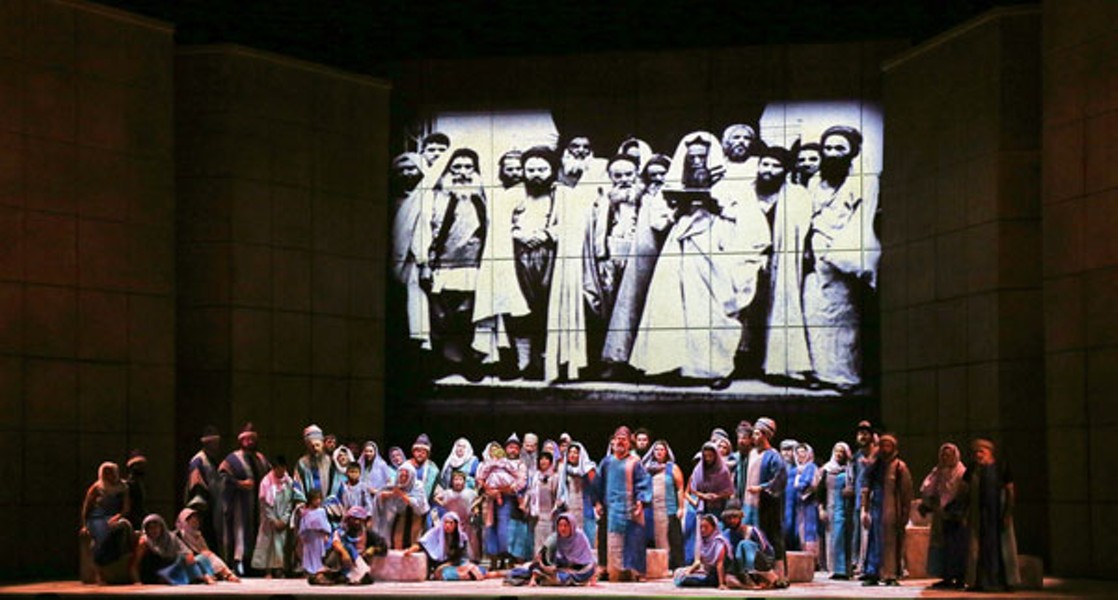 The set of Opera Carolina's Nabucco

As I sat in on a rehearsal of Opera Carolina's rendition of Giuseppe Verdi's Nabucco last week, I found myself captivated, unable to move — and not because Belk Theater's plush new seats were holding me hostage.

And not because the performance is particularly dynamic either. In fact, Nabucco is a pretty static opera, says director Bernard Uzan. Verdi's third work, which premiered in 1842, tells the Biblical story of the Jews' captivity under King Nebuchadnezzar, complete with a touch of romance. As Uzan shares, "Like every opera, it's about love. As someone said to me once: 'You know, opera is very simple; it's divided into three things. I love you. I don't love you anymore. I never loved you.'"

After chatting with him and Michael Baumgarten, Opera Carolina's resident lighting designer, I couldn't help but be drawn into the story by way of its set design. The company kicked off its 66th season with a new envisioning of Nabucco, using digital projections to capture the moods of the scenes, rather than simply replicating the surroundings.

"For me, now, there is nothing worse than trying to approach realism," Uzan says on the authenticity of the projections versus tangible set design. "How can we really recreate Babylon 3,000 years ago? Of course, we can do some research and try to sculpt a column and do this and that, but actually, it works less well than projection."

The first scene, for example, is set in a Jewish temple. Against a blank canvas of sandstones that the Jews probably would have built as slaves (it took local workers two months to construct the backdrop in the Opera Carolina warehouse), Uzan and Baumgarten chose to go with a projection of the Star of David rather than an image of the space's interior. The tone is further, um, illuminated by the textured lighting.

Another big moment that benefits from digital media comes when the Nabucco torches the temple. "Normally, 10 years ago, we would have little flame effects," says Baumgarten. "And now we've got video; we've got the Torah being burned and flames coming out, and we see flames going to the walls, flames on the chorus. We're doing this huge flame effect that you don't get without video."

As the duo worked to redesign the production, they had to figure out how to use technology to help tell the story while making it more engaging for audiences.

"Opera, when it began, was the rock 'n' roll of its time," Baumgarten says. "How do you take it and make it interesting to people who are listening to grunge bands or whatever. The great thing about opera that you don't get with anything else is, no other performance, Broadway, nothing, has 60 live musicians, people singing without amplification, a hundred people on stage, huge scenery. You get this nowhere. And that's what great about opera. The question is, how do we make it relevant to not only keep the art form alive but also do interesting things."

Uzan nods in agreement, sweeping his arm out theatrically, like one would expect from an opera director. He makes a joke about the "young generation" being 45 years old, compared to his 70, and how these younger audiences are addicted to images. "No one wants to sit for an hour and a half and see a nice column," Uzan says.