IT'S A HARD TIME to be celebrating America. We're living under an American president who represents everything America is not supposed to be, particularly in 2018: He's a racist, a serial liar, a wannabe tyrant, a kidnapper and imprisoner of immigrant children, an enemy of America's allies and friend of its foes, vehemently against the checks and balances of power that were put in place by America's founders to avoid the abuse of power by any one branch, and... well, the list goes on and on.

And yet here we are, in 2018, celebrating July 4, Independence Day.

What we need this Independence Day is independence from Donald J. Trump. So far, that hasn't happened. Therefore, for this week's music feature, we decided to look to our local musicians for their ideas on what America was, is or should be in 2018.

I did a similar version of this kind of listicle during my first year as editor of Creative Loafing back in 2005. The songs I chose then were protest songs by national artists ranging from the late Billie Holiday and Woody Guthrie to more contemporary musicians like Steve Earle, Public Enemy and Rage Against the Machine. George W. Bush was president then and we were involved in an illegal war in Iraq. The idea of my piece at that time was to show not only why protest music is so important and vital to our form of democracy, but also that provocative songs exposing the brutality of things like lynchings (Holiday's "Strange Fruit") are easily as patriotic as "God Bless America," and certainly more honest. 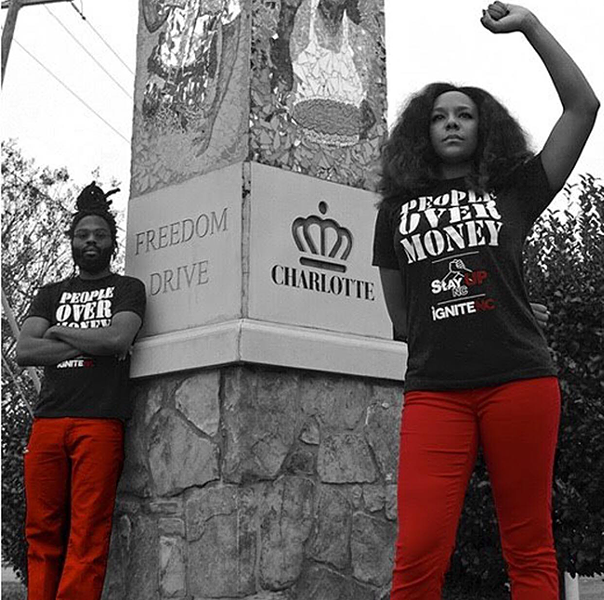 WE NO LONGER COVER national or international artists, dead or alive, in Creative Loafing — unless those national or international artists now live in Charlotte. So this year, I put out a call for songs from local artists, asking them to send one of their tracks that best reflects the America they see today. Some submissions are directly about America. Some are about injustice. Some are from the perspectives of characters different from the singers. All are deeply felt and perfectly executed.

One of them, called "You're Welcome," is by Mickey Stephens, a first-generation immigrant from Ireland who came to America because it was a great country. Stephens had a lot to say when I reached out to him for a song submission.

"This is an interesting time to do a July 4th piece about America," Stephens said. "The country is so divided and the stuff about [immigrant] children in camps is sickening."

The song Stephens chose to include in this playlist is about America welcoming immigrants.

"We recorded it four years ago, but it seems more relevant now," Stephens said. "It expresses my feelings about America as an immigrant. My green card expires next summer and I am thinking of applying for citizenship, although recent events make me ashamed of the current administration and the image of America they represent. The disrespectful way they are treating immigrant people does not fit my vision of America."

Stephens' vision of America in 2018 is shared by many of us, whether we are first-generation immigrants or the immigrants that we all are, at some point in our lineage, unless we're native people.

No matter what the topic of each of the songs I received from these eight local artists is, all of them are relevant to what we all should be thinking about this July 4. And that is: How are we going to change the awful course the country has found itself on today? What are we going to do to make America a safe place for all people — a place that makes Mickey Stephens' "You're Welcome" true again?

It's difficult for me to end this intro by chirping, "Have a happy Independence Day" this year, because it's hard to be happy while celebrating the America we currently live in. So I'll just say this: "Have a vigilant Independence Day." Because living in America as it is today, we must remain vigilant.

I've chosen one line from each song that I call "Thoughtful line." They're the lines that popped out for me. But click onto the songs and listen to all of the lines. Because really, they're all thoughtful lines.

Remember when the awesome Bree Newsome made international news by traveling down to Columbia, South Carolina three years ago this week, scaling that flagpole at the state capital like a black superhero and bringing down that ugly-ass Confederate flag to the applause of righteous people the world over? Yeah, well Bree's more of a superhero than you ever thought. The Charlotte resident is an activist to the bone, born to activists, arrested for a sit-in at Thom Tillis' office while protesting the chipping away of voter rights. She's also an accomplished filmmaker who directed that satirical Mitt Romney video, "Shake it Like an Etch-A-Sketch," that went viral in 2012. She's also a musician who kills it on this track along with another one of CL's favorite Charlotte rappers, Black Linen, who goes by 7thSoana on this track.

Thoughtful line: "You want me to respect authority? / It don't make you right just cause you the majority . . . you ain't got no jurisdiction with me."

"When I came here [from Ireland] on a student visa, I felt I had escaped a world of prejudice and bigotry," Stephens told me, explaining the genesis of this song. "People in America didn't care about Protestants and Catholics. They were welcoming and kind. One time I drove from California to Ohio. My tire was losing air in Memphis late on a Friday night. Everything was closed and I had no spare. I was driving around lost and I wound up in a back alley. A mechanic was locking the door to his shop. I told him my problem and he opened his shop back up and fixed my tire. We hardly spoke, he just did what needed to be done. Then he refused to take any money. That kindness to a total stranger is something I have not forgotten."

However, Stephens is acutely aware that his personal experience may not be shared by all.

"I know being a white, English-speaking guy has given me a different experience from other immigrants, but I have friends from China, Guatemala, Russia and Palestine who feel the same about America as I do," he said. "My Jewish friend from the Soviet Union came here to escape anti-Semitism and I came to escape the [Northern Ireland] troubles. For both of us, America was a place of hope and sanctuary."

The kindness that white immigrant Mickey Stephens was shown when his tire blew out in Memphis may not be shown to American-born rapper Nige Hood — that is, unless Hood was in a black section of town. Hood's song submission, "Contra Banned Contradictions," he said, "is about the contradictory standards in America — how oftentimes, depending on the perspective or sides of fortune, you can get the short end of the stick all along. Still, it also discusses how many of us say we want freedom, but do not embrace the opportunities that we are afforded in America. It is about counting your blessings, and becoming stronger as well."

The other thing about Hamilton — he was shot and killed in a duel by former friend and then rival Aaron Burr, who at the time was Vice President under Thomas Jefferson. (You think politics is vicious now!) Hamilton had sought Burr's defeat as governor of New York, and that pissed Burr off enough to challenge Hamilton to a duel. Interestingly, after the shooting, Burr fled to South Carolina, but eventually returned to Washington to complete his term as Vice President. He avoided New York (and also New Jersey, where the shooting took place) for a while, during which all charges against him were eventually dropped.

Thoughtful line: "Inspiration is a curse, doing nothing is much worse."

LeAnna Eden wrote "Protest Song" about the spate of killings of black people by police all across America, and I've written about the song endlesssly. But I love it, so here we go again: Eden wrote "Protest Song" before the Keith Lamont Scott shooting in Charlotte, but it took on added relevance after that incident. Not only that, but the song is important beyond its topic of the killings of black people. It's important because its most thoughtful line could be applied to almost everything that's happened since Trump decided he was not just the president, but America's new dictator.

"Guns Up" was the first single from Charlotte rapper Phaze Gawd's 2016 EP Definitive Theosis, a terrific collaboration with the late producer Deflon (DFLN). "The song," Phaze Gawd explained, "is a manifestation of the mind state of today's African American males, as well as a call to action to 'Put your guns up' and stand against those who've been gunning down our people and oppressing many others. The song spans different topics, from police brutality, to relationships, to politics, to even the newfound acceptance of nerd culture in the black community, giving an in-depth look into how the world looks to the average American black man now."

Thoughtful line: "Guns up cause our people be gunned down."

Though Amigo's singer and songwriter Slade Baird doesn't like to talk about his lyrics (he'd prefer listeners glean whatever they choose to glean from his works), he did allow that "this song is from the point of view of a character (a real person) who unfortunately is as American as apple pie." That character is the kind of Christian who, like extremists of any religion, thinks his religious beliefs justify his harming of other people.

How could you call yourself Yung Citizen and not have a song about being a young American citizen? In Charlotte rapper Yung Citizen's case, you can't. With its gospel choir vibe, "Power People" is among the more uplifting songs (along with Mickey Stephens' "You're Welcome") in this list of mostly dark reflections on the state of our country today; hence, the reason I've saved it for last. We desperately need an uplifting, gospel choir vibe in order to survive this thing called Trump with some semblance of sanity.

Thoughtful line: "Take it to the podium . . . This is to the power of the people, need to start fighting for your freedom."