by Ryan Pitkin and Alexandria Sands 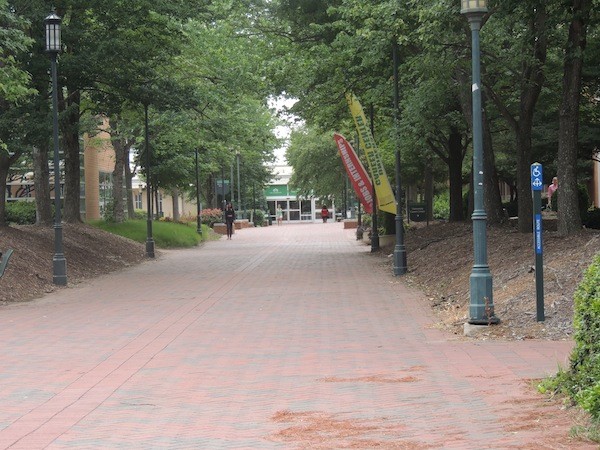 While high school students and gun control advocates were busy in recent weeks organizing a march through Uptown Charlotte, authorities at the city's largest university were dealing with a threat that only highlighted the need for Saturday's march.

UNC Charlotte student Matthew Saavedra, 20, was arrested on Tuesday, March 20, after telling a mental health physician in his hometown of King in Forsyth County that he planned to shoot up the school he currently attends — which is UNC Charlotte — once he turns 21.

According to an arrest warrant, Saavedra told his doctor that "he could not wait to buy a gun and shoot the university up."

Saavedra was charged with making a false report of mass violence on educational property, which means reporting that an act of violence will happen despite knowing that it won't occur.

The FBI is currently carrying out forensic analysis on a computer found in Saavedra's apartment, Baker said.

Baker said it's his understanding that Saavedra has been evicted from his apartment and hasn't returned to Charlotte since his arrest in Forsyth County.

Regardless, the department has stepped up its response training, he said, and has been reaching out to student groups and encouraging them to go through ALICE Training, an active shooter response program.

Caeley Riordan, a junior at UNC Charlotte who attended the Saturday March for Our Lives Charlotte event in Uptown, said she was bothered that police didn't inform students sooner about any specifics related to the threat.

Students received an email alert about a gun threat on Monday, March 12, but were not informed of any details until eight days later, when Saavedra was arrested.

Riordan said she found out early from a friend on staff at the university, but was disappointed with Baker's answers during a Facebook Live session he hosted to discuss the threat.

"I was kind of scared, honestly," Riordan said when asked about the incident. "I was a little mad that the campus police didn't reveal more information to us at the time, what it was. The faculty found out before we did, so that was kind of concerning. [Chief Baker] did a really good job of avoiding the questions that students had about why we didn't find out sooner and what they were going to do about it."

Baker told CL that his department wanted to make sure that Saavedra was "handled properly as a student" and that the full process of the department's Campus Behavioral Intervention Team was followed.

Keith Maples, president of the UNC Charlotte College Republicans, said he was thankful that Saavedra's doctor did the right thing and stepped in before Saavedra could act on his desires.

"What we need in this country is a revaluation of the mental health system," Maples said in an email. "The community around this guy did the right thing, and we should all hope he gets the mental health treatment he needs. Thank God for the doctor who talked to this individual. But, communities like Boward County — school system and police department — did not do the right thing when it came to the kid who shot up [Marjory Stone] Douglas High School."

Riordan, a political science major, said she was hoping to see more UNC Charlotte students attending Saturday's march than she did. The newly opened light rail extension created an easy path directly from UNC Charlotte to First Ward Park, where the march was being held, but Riordan was underwhelmed with response at the school.

"None of my classes mentioned it ... so it was sort of interesting to not really hear anything about it on campus," she said. "This morning there was only one other person who got on the train with us who I assumed went here ... I wish our campus was more involved against the gun violence and stuff."