A Bigger Splash settles for ripples 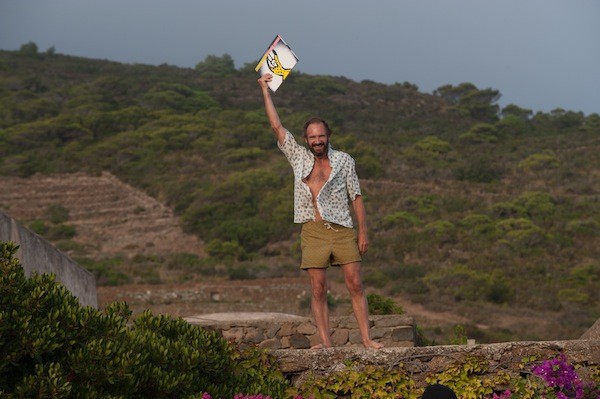 If I'm feeling particularly lazy next week when Yorgos Lanthimos' The Lobster opens locally, I might just cut and paste the line I've assigned to Luca Guadagnino's A Bigger Splash: "An English-language art-house effort that's positively drenched in thick, tasty Euro-ambiance, the film serves up tantalizing characters and even more tantalizing ideas before turning shockingly tame, predictable and, well, American during the second half."

In the case of The Lobster, it's the story that loses its fizz (more on that when it opens). But in the case of A Bigger Splash, it's the characters. Set on the Italian island of Pantelleria, the picture takes a fly-on-the-wall approach to dissecting the lives of its principal players. Marianne Lane (Tilda Swinton) is a rock star resting her damaged vocal chords in the company of her documentarian boyfriend Paul (Matthias Schoenaerts). Their days of snogging, shagging and sunbathing are interrupted by the arrival of Harry Hawkes (Ralph Fiennes), a music producer (he once worked with the Rolling Stones) and Marianne's former lover. Accompanying Harry is the aloof Penelope (Dakota Johnson), the daughter Harry just learned he had.

All of the performances are excellent, although this is primarily Fiennes' show. Often buttoned-up on screen, he really cuts loose here, playing a self-centered blowhard who talks nonstop and is prone to start dancing at any given moment. Harry often makes those around him uncomfortable, whether by his actions (he still flirts with Marianne) or by his words (he talks about his attraction to his own daughter, which led me to snort to the only other critic who bothered to attend the local screening, "Is Ralph Fiennes supposed to be playing Donald Trump?").

A Bigger Splash is utterly compelling as long as it focuses on its players and the way they all circle each other. But a late-inning infidelity and a late-inning crime — neither of which I bought for one millisecond — fly in the face of the carefully cultivated scenario, and it all culminates with a risible scene set in the rain. (Since Guadagnino reportedly isn't a fan of his source material, a 60s French flick starring Alain Delon, he would have been forgiven for jettisoning even more of it.) It's a shame, because a unique picture focused on conversation ends up getting compromised by the sort of humdrum plotting found weekly in multiplex fodder — yet another example of the gift of gab getting trumped by the gift of drab.