News & Views » From The News Desk

Racist rhetoric, the Klan and an Israeli flag 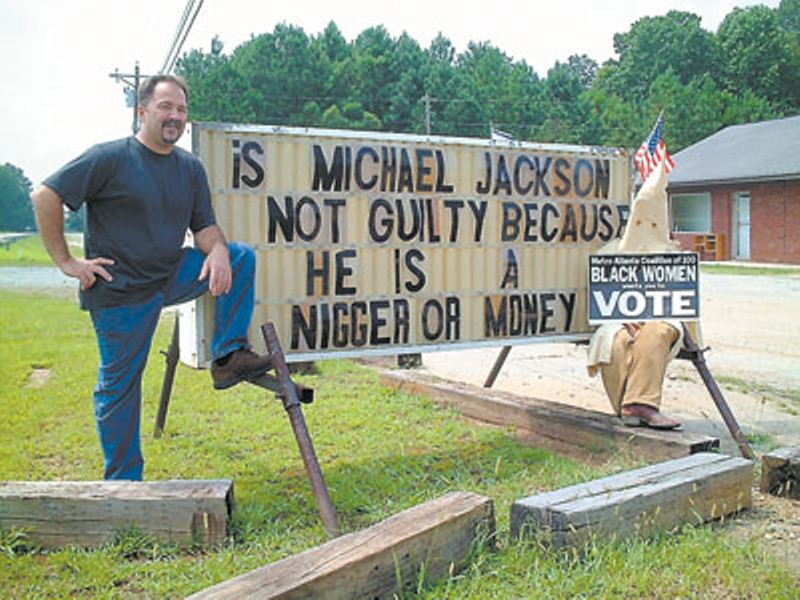 WARNING: This column has been rated R for racist and sexually explicit language.

I walked into the bar and asked for Patrick Lanzo. The guy pushing a broom and another fellow, who smelled like he'd missed his AA meeting, gave me blank stares.

"Who wants to know?" said a perky, barefooted blonde nearby, hand on her hip and challenge in her eye.

I explained that I was a journalist. Blondie strolled over and allowed, "I'm Patrick."

She retorted, "It's really Patricia, but people call me Patrick."

By then, the broom guy's trajectory had landed him in front of me. He stuck out his hand and laughed, "I'm Patrick. This little bitch ..."

And so began my adventures in what is arguably the most politically incorrect tavern in the South. I had trekked to Lanzo's bar because I wanted to test my own self-image as a First Amendment absolutist.

The saloon is dubbed the Georgia Peach. Out front, a hard-to-miss sign proclaims: "Is Michael Jackson not guilty because he is a nigger or money?"

Ahem, not exactly a message one expects to see, circa 2005, driving along a pretty country road in Paulding County, Georgia, about 45 miles west of Atlanta.

Oh, there are plenty of folks hereabouts with sheets and hoods stored in the attic. But racism nowadays is more refined. Racist lingo just isn't bandied about since the Ku Klux Klan shed its robes and moved uptown. Except at Lanzo's bar.

Inside, it's a schizoid's dream. Pictures of Civil Rights leaders -- Frederick Douglass, MLK, Malcolm X, Nelson Mandela -- jostle for wall space with drawings of Ku Klux Klan rallies and racist caricatures from a century ago.

Over behind the pool tables, a mannequin dressed in full Klan regalia bides its time. Its legs are a little twisted nowadays, cowboy boots pointed askew, because it has been hauled and tugged so much for picture posing. Lanzo is proud of a huge plastic bin full of Klan memorabilia -- such as a page of bank checks emblazoned with the group's logo.

The centerpiece, presiding over the bar, is a portrait of Jesse Jackson, and it takes a minute to realize the reason. Next to the painting is a cartoon of a black boy with a certain body part caught in a fence hole.

"Yep, old Jesse got his pecker caught, too, didn't he?" boomed Lanzo.

Give Lanzo the slightest opening, and he'll offend. It's what he does. He proudly displays the bar's menu, emblazoned on the front with a drawing of a Klansman in a hammock. The hammock is formed by two lynched black men whose feet are roped together.

The Georgia Peach for years hosted an annual music festival of neo-Nazi skinheads called Hammerfest. In 2002, Lanzo hired a black stripper for the party, and the offended bald goose-steppers took Hammerfest elsewhere. But they'll be back at the Georgia Peach in October.

I'd anticipated seeing a Confederate banner outside the Georgia Peach, but instead a large Israeli flag listlessly slow-danced in the breeze. Lanzo explained: "Now, the skinheads don't like that flag. But I do. It's a pretty flag. And I like the Israelis. If it was up to me, I'd give the [Defense Department] money to the Israelis, and let them clean up the sand niggers. You know they'd do it, too."

Turner, an occasional waitress at the Georgia Peach, chirped, "We get the bikers and the Klan and the skinheads. They're different, not what you'd expect. The Klan guys, well, they're just ignorant. But the skinheads are very intellectual, which is a surprise at first. The bikers are the best. They tip a lot and they're fun."

Lanzo contends he isn't racist. "If I am, then I'm racist against everybody, not just one group." He has supported gay rights -- while calling gays "queers," "fags" and "lickers."

The civil rights group was wrong, of course. As Lanzo said, thumping his chest, "If my rights aren't protected, neither are theirs. Either everyone has rights or no one does."

With a wince and a grimace, I replied, "That's absolutely true."

Lanzo winked, "Besides, I'm a member of the NAACP."

Group Senior Editor John Sugg can be reached at [email protected]. His blog is at www.johnsugg.com.