7 Days in Entebbe dances around dramatics 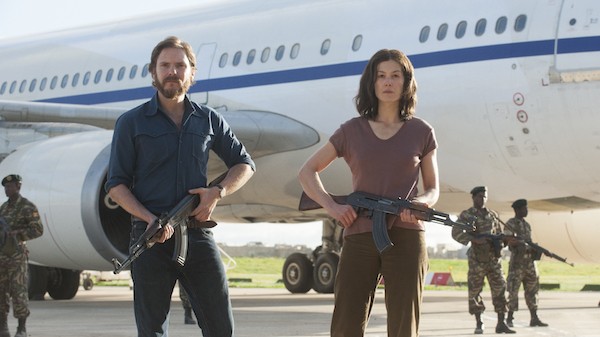 It’s impossible to predict what real-life stories will capture the fancy of an inquisitive teen, and one of mine was the saga of Air France Flight 139, which was hijacked during the summer of 1976 by Palestinian and German terrorists and allowed to set down at Uganda’s Entebbe Airport with the permission of the brutal dictator Idi Amin. Since the passengers were mostly Jewish, it was up to Israeli commandos to attempt to rescue them in a daring raid that was labeled Operation Thunderbolt.

My interest in this historical event was perhaps stirred by the fact that it was largely a rebuke of Murphy’s Law, a rare instance of things ultimately going right in a world in which everything mostly gets messed up (as had happened with a previous terrorist siege, the Munich massacre at the 1972 Summer Olympics). At any rate, my fascination was pronounced enough that I not only read books and delivered a school paper on the subject but also caught all three cinematic renditions: Israel’s 1977 Operation Thunderbolt, a Best Foreign Language Film Oscar nominee starring Klaus Kinski and Sybil Danning, 1976’s Victory at Entebbe, a made-for-TV movie with Anthony Hopkins and Elizabeth Taylor, and 1977’s Raid on Entebbe, another made-for-TV flick, this one headlining Charles Bronson and Peter Finch.

Belatedly joining the party is the new drama 7 Days in Entebbe, which is different from its predecessors in that it spends more time analyzing the mindsets of its terrorists – or at least the two German ones, played with the proper levels of intensity by Rosamund Pike and Daniel Brühl. This version also digs deeper into the political strife between Israeli Prime Minister Yitzhak Rabin (Lior Ashkenazi), who hopes for a peaceful resolution, and Minister of Defense Shimon Peres (Eddie Marsan), who supports a more aggressive approach.

7 Days in Entebbe is absorbing for much of its running time, maintaining interest as it cuts back and forth between the terrorists, the hostages, and the government suits. It’s only during the home stretch that the picture largely falls apart, with thoughtful exchanges eventually crowded out by bombastic speeches meant to dot the i and cross the t of every moral position championed by the film. Worse, a time-wasting subplot about the relationship between an Israeli commando (Ben Schnetzer) and his dancer girlfriend (Zina Zinchenko) inexplicably grows in prominence as the picture progresses, and the rescue operation – a sequence that should have audiences on the edges of their seats – is destroyed by interspersing its particulars with moments from a theatrical dance production.

It’s an unfortunate turn of events, because a movie that should have struck with all the force of a thunderbolt instead seems content with distributing a firm rap on the knuckles.