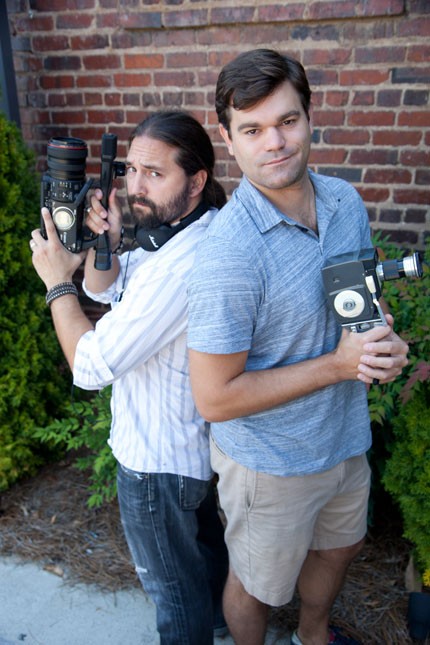 A young man wearing a multi-colored striped shirt with a book bag strapped to his back waits in line. He says a quick prayer before sticking his arm into a white cardboard box and pulling out a strip of white paper. His eyes dart over the writing. "Drama." He reads off the word and exhales a breath of relief.

The young man is Hemanth Srinivasan, a New York Film Academy graduate who is representing Madras Mantle, one of 26 teams competing in the 48 Hour Film Project, an international competition where teams race to make a seven-minute film in just 48 hours.

It's 6 p.m. on a Friday and The Light Factory is bustling with filmmakers, writers, directors, photographers and actors. The reason they've rallied in the small artsy space in Midwood International & Cultural Center? They're all participants in the 48HFP and waiting to learn which genre they will be assigned by a random draw, in addition to an announcement of three requirements for the films.

From August 7-9, these brave souls had the task of making a short film in a short window of time. It's a challenging exercise that won't go over well for anyone who isn't passionate about film and savvy with time management and the ability to go hours without sleeping.

Orange fold-out chairs are spread across the room with some folks sitting while others stand around in clusters. Some are well acquainted with their teammates while others shake hands for the first time. A table with water bottles sits in the center of the room providing relief for the folks who have beads of sweat dripping down their faces. The room is stuffy, but groups are enthusiastic, only expressing signs of annoyance when the importance of hashtags (#CLT48HOURFILM) is overemphasized and the genre-drawing lingers.

During the kickoff event, Will Fisher, the Charlotte city producer for 48HFP, stands at the front of the room and asks members from each team to line up. Since they are spread across the room, the line is formed from various directions leaving Fisher surrounded and the scene a bit chaotic. Out of all the categories of genres, "Western" and "Musical" are the top two that filmmakers hope to avoid.

Jim Soder, a tall, burly man in a black T-shirt, and jeans with a shiny cowboy-style belt, is one of several actors who showed up on a whim and the off chance that a team might need his services. His selling point: "I have horses and will lasso." Clearly, he's any filmmakers dream come true if they're unfortunate enough to draw "Western."

Each team is assigned a genre, which is chosen at random via a drawing. Every year, 14 genres are chosen out of 32 that are used for 48HFP. But there's once catch — each of the films must follow specific guidelines assigned by panelists of 48HFP. This year, the films need to feature a garden hose, the line "I have a funny feeling about this" and a character named Scarlet or Stephen O'Farrell, who is an architect. Winners from each city get the chance to attend and compete in Filmapalooza, an international festival of 48 hour films. Twelve to 14 films selected from Filmapalooza will have the opportunity to screen at the renowned Cannes Film Festival.

This is Charlotte's third year participating in the film shenanigans. After films are screened by a panel of judges, one will be selected as the overall winner of Charlotte's 48HFP. All of the Charlotte-produced films will screen publically on Aug. 20 at McGlohon Theater, where the Charlotte winners will be announced. In addition to the judges' overall winner, which will go on to compete against other film winners from other cities around the world, there will also be an audience winner who will pick up $1,200 provided by local donors and five other top team picks who will have their deposit for the project — $800 — returned.

Fisher believes the 48 Hour Film Project is essential to helping bring together Charlotte's film community. "I think that film is so important and our city, as a whole, should be cultivating this art form and the talent," Fisher says. He reflects on what he calls a mass exodus of creative folk that came out of Charlotte and a list he has of almost 400 — directors, photographers, set designers, choreographers, actors — who came from Charlotte but don't live here anymore.

"They send me messages like 'We appreciate what you're doing, but we don't live in Charlotte anymore,'" Fisher says. "I feel like I'm seeing the frontlines of the ramifications of the absence because all those people lived here before and were here making films and developing their art. I think that's extra important for 48HFP and others of these types of festivals because some filmmakers are here but there's not much to engage in." In anticipation of projected city growth, Fisher hopes 48HFP can foster the arts community. "Our goal is to draw more people here because of the people and culture," says Fisher.

THE POWER OF TIME MANAGEMENT AND SPONTANEITY

If you're like me, you're wondering how the filmmakers participating in 48HFP manage their time and whether or not they brainstorm beforehand. Though I'm told participants are not supposed to do script writing prior to the kickoff, many of them do ponder scenes, settings and scripts. But there's only so much they can do without knowing what genre the film will fall into.

Fisher suggests that one of the most important things involved during the film-producing weekend is time management and proper pacing. After the drawing, he suggests that teams have their scripts written by around 11 p.m., so that they can go to sleep and start shooting early the next day in order to be done by midnight and to have editing and last minute tech issues to be sorted out on Sunday. He stresses the importance of saving video files and sending files ahead of time.

As far as team size goes, Fisher follows the "less is more" philosophy. "You definitely have to keep in mind the writing because everybody thinks that their idea is genius and when you've only go 48 hours you don't have time for people to get upset."

In his past experience, timing was one of his biggest challenges. Two years ago when he competed in the 48HFP, he sat a $400 light kit on top of his car to make room for hungry actors on a quick stop for pizza. "Everything was frantic because I'd been up since 3 a.m. finishing the script," he recalls. "We got going and we're talking and all of a sudden I hear something and I look back in the car mirror and see this $400 light kit laying on the pavement and lights busted into a million pieces." 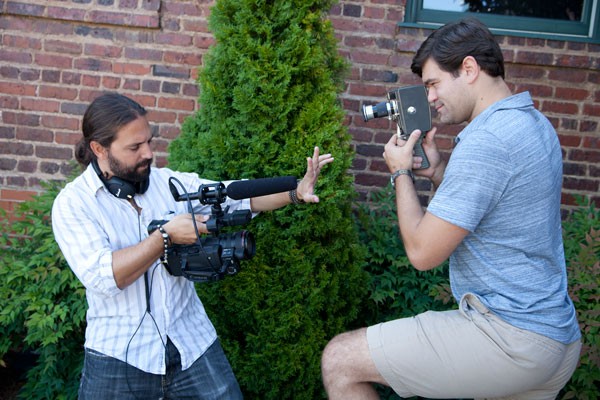 Local filmmaker Chris Baker won the audience choice for 48HFP last year. His Glory Days is a time-travel flick about a wild, immature young adult who is visited by his older self. The older, and not wiser, self warns him of the mistakes he is going to make that will have huge consequences on his future. But after a few drinks together the older self abandons his preaching and embraces the party lifestyle that got him into trouble, which culminates in disaster.

Baker talks about the spontaneity of the film and how things were shifted in the process. For instance, the man playing the younger version of the main character in the script was pulled last minute from behind the camera. It's not everyday you give a cameraman a lead role in a flick, but since he resembled the other actor and was open to the idea, the shoes were filled spontaneously.

Last year, local filmmaker Chuck Kleven made a suspense/thriller for 48HFP. The result was Drawn, a chilling flick based around a young girls disappearance and a young boys indifference to her abduction by a mystery man that the boy had drawn. Kleven had previously won the fest in 2013 with his dark comedy flick Hold Your Breath. For this year's 48HFP his team got "Film de femme," a category that places an emphasis on a strong female protagonist. For the flick, his team took Soder (the cowboy who showed up at the drawing) up on his offer to help. The film, titled "Canter," was shot in Lancaster, South Carolina at Evensong Farm. The farm is owned by Dave Farnum and Carley Goodnoe, a stunt rider who starred in the film. The property was a prime location for shooting a slow-motion montage of running horses. Kleven praises the project and its spirit of spontaneity.

"It's a good exercise for creative people because creative people seem to sometimes put things off or wait until the right conditions to initiate something," says Kleven. "So this 48 hour film period really gets a team together and kick starts you to do something from beginning to end in the shortest period of time imaginable."