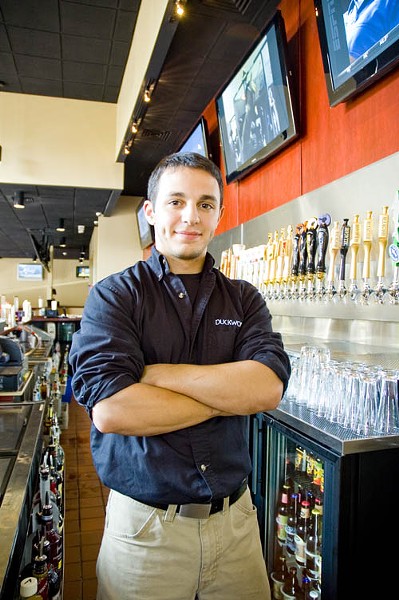 The 24-year-old general manager of Duckworth's Grill & Taphouse, formerly Duckworth's Cheesesteakery, has played an important role in bringing the flavors of unique microbreweries to Charlotte. Originally from Lebanon, Habbouche grew up working in family restaurants in Cleveland, Ohio, and became passionate about craft beer through establishing relationships with distributors and breweries. For Habbouche, beer is the gift that keeps on giving.

Creative Loafing: Do you have a style of beer that you prefer, and one that you're a little ashamed of enjoying?

Michael Habbouche: Three or four years ago, I would probably have said that the craziest beer I liked was Guinness. Now, hoppy beers are always exciting for me. An emerging style of beer that's become a favorite is sour ales; they're very enjoyable because they're low alcohol but really intense in flavor, so I can have a few and not worry about the things you have to worry about with high alcohol beers. And of course, imperial stouts and barley wines. As for my "beer moped" (fun to ride, but you hope no one sees you on it), there's nothing like, after mowing my lawn in the summertime, tipping back a can of PBR, pretending it's a can of Sprite and just chugging it. At that point, I want something refreshing that's not going to be a palette overload for me; I'm sweating tears and blood so I just want something I don't have to think about.

Why do you believe people should branch out and support microbreweries?

I have a lot of patriotic customers and I'm extremely patriotic, too; I love this country, it's done a lot for me and my family and I'm going to be here for the rest of my life. If you want to be patriotic, start drinking American microbrews. A lot of breweries have beers that are lagers just like Bud/Miller/Coors, just made with better ingredients. There are plenty of craft beers that appeal to the palette of someone who's used to Bud Light that are just as easy to drink.

What's appealing to you about the craft beer culture that you try to incorporate into your restaurant?

I'm a beer nerd; I'll drive to crazy parts of the country and stand in line at 4 in the morning to get two bottles of beer. But there's a huge difference between being a snob and a nerd, which is what I teach my staff; a well-trained staff is your connection to customers. You don't want to make someone feel stupid about not knowing something. Being a nerd is about being enthusiastic and knowing that there's still more to learn and getting other people involved in that. At my house, I probably have 100 extremely rare beers. If there's a special occasion, I'll bust them out; 22 ounces of something so special demands to be shared with people.