For 20 years, WEND 106.5 The End has been putting new music on the Charlotte map. From in-studio performances with national acts to Divakar's Sunday night local music showcase "90 Minutes"; from the annual Weenie Roast to the Not-So-Acoustic Christmas events, WEND has been an outlet for music of all kinds. Other area stations have been around longer, but it's tough to find one that has had a more constant and consistent influence on the area's musical tastes from the local, regional and national level. So, outside of the music you can hear on a daily basis, here are 106.5 things you should know about 106.5 The End:

1. The station, which is licensed out of Salisbury, has been broadcasting since March 16, 1946.

4. The first voice heard on the station was Keith Abrams of The End's sister station, Magic 96.1.

5. The first song played under the new format was "Alive" by Pearl Jam. 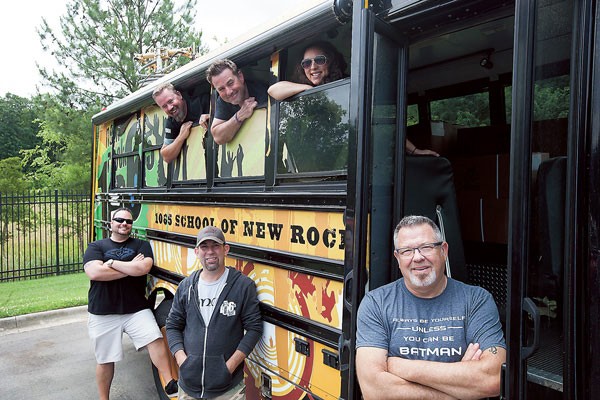 7. Jack Daniel has been there since the The End's start.

10. The worst pronunciation of his name that Divakar has heard is "Drive a car."

11. DZL has been with the station for six years.

12. "Diesel" was an old sports nickname that got shortened over the years. DZL also makes it easier than remembering the 'i' before 'e' rule.

15. Chelsea Paxton, The End's lone female DJ, started as an intern in 2011 and joined Woody & Wilcox as an on-air personality in January of 2014.

17. Aside from that short stint, Hancock has been at WBT for 23 years. He refers to his time at The End as a "timeout."

18. The End's home is located off of Billy Graham Parkway. It's the third building in its history.

19. The first building was at the corner of Kings and Morehead, which is now the Greenway.

20. The second building was located further down Morehead.

21. Many employees noticed the "humor" of having a radio station called "The End" across the street from a funeral home at that time.

28. There are at least 35 microphones in the building.

29. The End is now an official NASCAR station, airing all 38 Sprint Cup races.

32. A "Big Fat Birthday Bash" to celebrate 20 years will be held on June 6, 2015, at the Uptown Amphitheatre featuring Cake, New Politics, Flagship and Big Data.

33. The station is giving away a Polaris Slingshot to celebrate its birthday... It looks like a Batmobile. 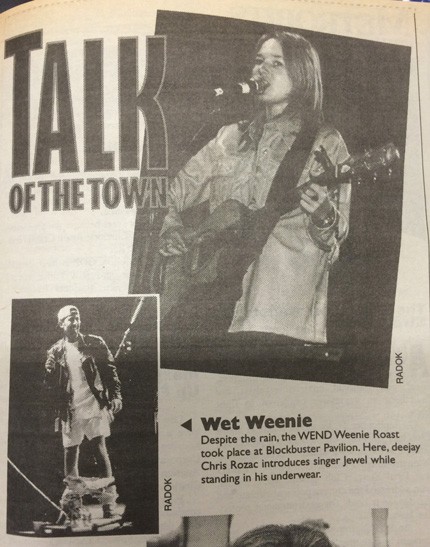 36. Trying to make a lasting impression, Rozak hit the stage halfway into Jewel's first song and dropped his pants in front of the folk singer.

37. The second Weenie Roast was held on Sept. 14, 1996, and featured Spacehog, Nixons, Stabbing Westward, Self, Lustre, Super 8, For Squirrels, and the Verve Pipe.

40. The fourth Weenie Roast was held on Sept. 5, 1998, and featured Creed, Better Than Ezra, Dishwalla, Jimmie's Chicken Shack, Athenaeum, Everything, Far Too Jones and Jolene.

44. Shortly before the gates opened, Everlast's manager asked that no pork products be sold at the Weenie Roast (?!). While the singer performed, some nameless individuals took it upon themselves to fill his dressing room with hot dogs, pork rinds and pepperoni.

45. Among the performers on the second stage that year was the Jennifer Nettles Band -- as in Sugarland.

47. The performers were 3 Doors Down, the Crystal Method, Dave Navarro, Athenaeum, The Fixx, American Hi-Fi, Poe, Good Charlotte and more.

52. The local bands in 2003 were Elevator Action, Etheric, Status Flow, The Missing Days and The New Blacks.

57. You can expect this year's Weenie Roast to be a continued celebration of their 20th anniversary.

58. Same for the Not-So-Acoustic Christmas concert.

59. The End has held a Christmas concert each year, called the Not-so-Acoustic Christmas.

60. The first concert the station hosted was at The Ritz on Independence Boulevard in June of 1995. The lineup featured Hole, Sponge and Letters to Cleo.

61. The most requested song in the station's history was "Detachable Penis" by King Missle.

62. The first band to play an in-studio acoustic performance was Incubus.

63. NASCAR driver Brad Keselowski once took over a show for DZL after winning a bet that he would win the Cup Series Championship.

64. The station never thought they would play Metallica, but they eventually did. It didn't go well.

65. "Y'all used to rock" is the most commonly heard complaint.

67. If Jack Daniel could go back in time, he'd change it to "Charlotte's New Music Alternative."

75. "Skratch 'N Sniff" is a nationally syndicated show based out of San Diego which airs on Saturday nights.

76. Competitive eater Joey Chestnut was one of the most recent in-studio guests.

79. The most popular artists over the years have remained the same -- Pearl Jam and Nirvana.

80. Divakar has hosted more than 400 bands in studio on his show 90 Minutes Plus.

81. The most bands in-studio during one episode of Divakar's show was seven.

83. Dave Grohl was in the studio early on while Foo Fighters were playing Charlotte's Center City Fest in 2003. ...

84. ... Rozak assumed they'd never be nearly as popular as Nirvana.

85. Jack Daniel is from the Charlotte/Concord area and has been in the market since 1970.

86. People can hear the station from Greensboro to Asheboro to south of Rock Hill, South Carolina.

90. When Jack Daniel handed over the Budweiser Lounge to DZL, he did so by symbolically handing him a can of Bud.

91. There have been times when the station has gone down due to thunderstorms; though an absent-minded Jack Daniel has also caused some dead-air in the early days by forgetting he was on air after taking a break.

92. Kristen once called Daniel after she noticed his car leaving the parking lot while on commercial break. Daniel said he was going home because it was 6 p.m. It was actually only 5 p.m.

93. Jared Leto and Gavin Rossdale have repeatedly given thanks to the station for all of their support over the years.

94. One of the most prized possessions in the studio is a wall of posters featuring the Weenie Roast lineups from over the years -- some of which are signed.

95. In 1998, Jack Daniel was so comfortable on air that he accidentally dropped the dreaded 'f' word while addressing a guest on the Lounge.

96. Jack Daniel does like to drink Jack Daniels -- preferably the Tennessee Honey variety.

97. The station gets a fair share of mail from area prisons. The Lounge used to get a good bit from two South Carolina inmates who referred to themselves as "Big Steve & The Worm."

98. Jack Daniel once did the voiceover for "Get in the zone, Auto Zone" commercials.

99. Divakar is an actor and was recently in a Barry Levinson movie called "The Bay."

100. The station has been streaming online since around 2000 when they were bought by Clear Channel.

102. Performers at the station's Red Ventures Sound Stage sign a wall in the building -- it currently includes George Ezra, The Offspring, Iamdynamite and The Griswolds.

103. One of the worst ideas they had over the years was the "iPod weekend." DJs were allowed to play whatever was on their iPod. The format was so all-over-the-place it wasn't done again.

104. DZL has a tattoo of a microphone on his upper right arm.