There's nightlife ... then there's nightlife so good that you literally make a night of it, and it turns into over-nightlife. Now I'm not talking about staying up all night snorting Red Bull, or doing the horizontal mumbo that results in waking up to do the walk of shame (or stride of pride as I prefer to call it).

Last Sunday I woke up on the ground, with the freshly risen sun shining through the screen of a tent like a spotlight, so hot it dried the layer of dew covering my body — while an off-key mockingbird was singing like a rooster. I'd gone country ... back to my roots. I roughed it for the weekend in the mountains surrounding Virginia Tech with my old college girls. And girls we were.

When pitching the tent after installing the poles, we realized their flimsiness made them good for fly-slash-spear fishing. So we proceeded to take them down to the river to fish, but then gave up after five minutes. Eventually, we got it up (the tent that is), and our temporary home stood even longer than the first two little pigs' homes did. 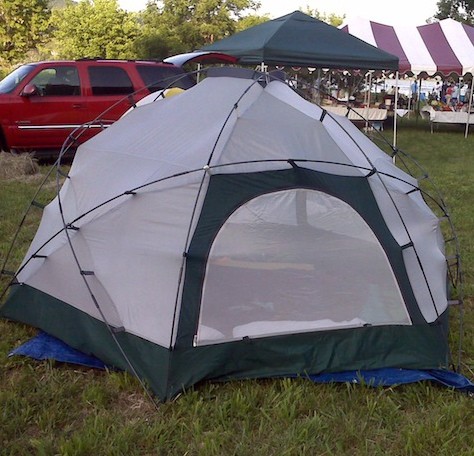 We retreated to the camp fire to have a little jam session with bongos and other unknown instruments — such as a stick with little jingle bells attached to it. We deemed this "Bells on a Stick" and proceeded to sing a song about it to the tune of the song "Pants on the Ground" ... "sounding like a fool with your bells on a stick" (you may had to have been there).

The worst thing about camping is the lack of water — to drink and bathe in. So we took our water bottles and had a water chugging contest. I felt and looked like a hippie … I was wondering if bugs were flying toward me because I smelled so bad. I started dousing myself in insect repellent hoping it would make my skin and blood a little less appetizing for the insects. Kinda like dipping a wing in blue cheese ... the condiment just ruins the flavor.

There's a campground in Carowinds, and being the home of NASCAR, there are countless RV lots. There are places to camp on Lake Norman, but it's illegal ... I'm not sure if taking a nap or passing out counts under that law, though. But it is legal on Lake Wylie — there's the McDowell Nature preserve and KOA in Fort Mill. There's also King’s Mountain, where I've been warned it's illegal to have alcohol.

Where else can one go camping in the concrete jungle? You tell me.

My friends and I wanted to go camping so badly last night that we got my tent that was conveniently still ready for use in the trunk of my car, and pitched it on the the roof of my Uptown parking garage … don’t try this at home kids. I got off lucky that the security guard in my building could be bribed with S'mores ice cream.