A new tilt on Hooters and Bikinis at the Tilted Kilt

After 10 years of living away from England, a girl can get a little homesick. Since I’m in a financial flump (aren’t we all), I can’t hop the pond this summer. But if you’re like me and need a wee break, you can skip over to Scotland ... and you don’t even have to leave the state. All you have to do is head over to the Tilted Kilt on Carowinds Boulevard.

The Tilted Kilt makes you feel like you’ve just taken a nine hour flight and landed in the land of Haggis — but luckily without the jet lag. Food includes Danny Boy’s Shepherd Pie, sausage sandwiches, and a Fat Bastard meatloaf sandwich. And to put a new crunch on an appetizer favorite, you can order the Irish nachos ... on crisps (aka. potato chips). But as well as bringing Scottish cuisine to America, the Tilted Kilt has mixed a little east with a little west. And by that I mean American girls in skimpy Scottish kilts — what an edge on tradition ... well, a shorter edge at least. 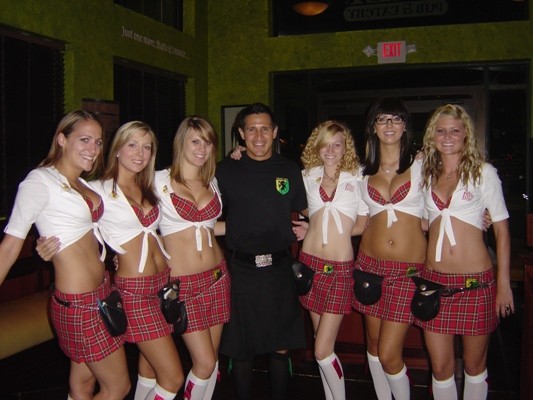 Essentially, the Tilted Kilt is like a Scottish tilt on Hooters and Bikinis. While the orange shorts and bikini tops are traditions in themselves, the outfits look like naughty schoolgirl uniforms. And ladies, even the men wear kilts, which will make any girl ponder that age old question — do men wear anything under their kilts?

The pub’s décor includes framed soccer shirts and kilts, as well as Scottish and British memorabilia. A personal favorite is the Black Knight security poster from Monty Python that reads “none shall pass.” But the best part is the suggestive Scottish stanzas on every wall, such as “to be a kilt tilter the queen did aspire, but measurements, she had to acquire.” There’s also one about a man in a kilt that did a head stand. And after a few drinks, I’m sure you’ll be coming up with your own vulgar verses too — you’ll be the next saucy Chaucer. After all, even the Canterbury Tales started in a pub.

Speaking of which, drink specials include $2 Coronas on Friday, $2 Bud Lights on Sunday and $2.50 Guinness every day. And of course, there are more drink specials during the week. But if the scantily, or rather the Clan-tily dressed women, and the food and drinks weren’t enough to draw you in, the pub also shows the UFC fights.

With the ladies (and the lads too), the Tilted Kilt offers the perfect place for your own version of a Highland fling.