Not quite heaven, not quite hell, Purgatory night at Amos' Southend left me feeling stuck in the middle. While the event lived up to its reputation as the place in Charlotte to "let your freak flag fly," I expected more shock and awe. I left feeling underwhelmed.

First, the freaky part. Purgatory is the place to go if you like to people watch. Many of the attendees dress up in spectacular fashion: nuns, priests, naughty schoolgirls, angels, demons. They done bat wings and bull horns. One woman wore nothing but a neon green thong and electrical tape "X"s over her nipples. Another women wore an elaborate feather headdress and dark priestess costume that genuinely impressed me. Guys got into the cosplay of it all too. One walked around all night, seemingly looking for a playmate, in nothing but his tighty whitey's, a leather harness, and fake blood smeared all over his face and chest. 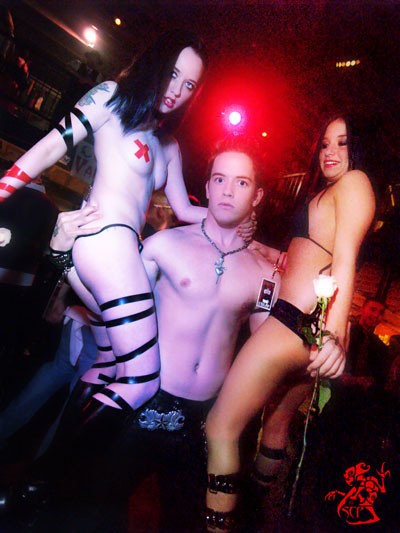 Vendors were set up around the perimeter to hawk their wares: wooden paddles, "evil sticks" - I tried it and it burned like fire!, leather floggers, fur-lined handcuffs, studded collars, and the like. The vendors were friendly and knowledgeable. They seemed like a council of elders - folks who had probably been around the scene for a while. They offered encouragement and expertise, helping me choose between a thick leather collar with several rings or a thinner more flexible collar with dangling delicate chains. Decisions, decisions...

In the VIP area upstairs, one could sign up to be pseudo tortured in any number of ways: spanking, flogging, knife play, light electrocution. So the opportunity to indulge your fetish fantasy was there, but it was pretty structured and controlled. Granted, this is not someone's secret dungeon fetish club. These demonstrations were just that - demonstrations for an audience. Not that they didn't hurt; there was some very real pain going on there. Some people get off on being watched. Not only is the high from getting paddled, it's also from knowing your burning red ass is exposed to the world.

So as someone from outside the lifestyle looking in, I can appreciate that Purgatory does provide a place for people to dip their toe into kink. It's also a place for FetLife folks to get together offline. I appreciate seeing any kind of community building, especially for people on the fringes. Human sexuality is amazingly diverse. Everyone should be free to explore their sexual self in a safe and non-judgmental space.

What disappointed me most about the night is that so many of my friends refused to go with me. When I told them what it was, they were equal parts terrified and disgusted. I assured them that they didn't need to participate, that it was all monitored for safety, and that it's a well-established long-running event. Yet they still wouldn't go. So many of my guy friends brag about being "kinky" and "into weird shit," yet they freaked out at the thought of going to Purgatory. That's sad to me. It's not my particular persuasion, but I can still learn something by going. I can appreciate the variety that is the human sexual appetite. I can applaud the people brave enough to get tied up and hung from the rafters. I can find inspiration in seeing people be honest about who they are and what gets them off.

Don't forget, oral sex in North Carolina is still illegal and considered a "crime against nature." What is enjoyed by some, is repugnant to others. Judge not lest ye be judged.