Want good loving? Get with a fat guy 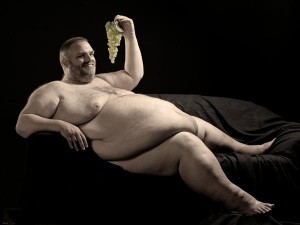 Though you may lust after The Situation's abs and yearn for the svelte Denzel Washington to kiss you good morning after a night of lovemaking, according to a new study, you're better off with a fat dude.

Seriously, I wouldn't joke about this.

Researchers at Erciyes University in Kayseri have just completed a yearlong study correlating body mass index (BMI) and male sexual performance. Their findings: Men with excess body fat last longer in bed. In fact, heavier men were able to make love for an average of 7.3 minutes, while slender men could count themselves lucky if they held on for a mere 108 seconds.

The reason? Female hormones. Men with excess fat showed higher levels of the female estradiol sex hormone. This substance apparently disrupted their bodies' natural "male" neurotransmitter chemicals and slowed their progression towards orgasm. Ironically, the less masculine their bodies appeared, the better lovers they proved to be.

The scientists compared the BMI and sexual performance of over 100 men who were being treated for sexual dysfunction with 100 other males who lasted longer during sex. They found that men suffering from premature ejaculation were on the whole thinner and fitter than their "better endowed" brethren.

Now, let that sink in. The next time you're complaining about your man's weight gain, you should think about how long the sex lasts.

Let him have that extra beer and pork chop because, at least in the study, fat is where it's at.